A Thin Gruel of Russiagate

Thin gruel indeed today, I'm afraid as partial government shutdown mania, the Syria withdrawal, and the Mattis resignation have sucked all the attention away from our media elite.

One thing that has gone largely unnoticed is the Ex-Senate Intelligence Committee aide sentenced to two months in leak probe, which I found somewhere in the interior of the WaPoo.

A longtime aide to the Senate Intelligence Committee was sentenced Thursday to two months in prison for lying to FBI agents about his contact with reporters during a federal leak investigation, a punishment imposed after pleas for leniency by the committee’s chairman and two top-ranking members.

James A. Wolfe, 58, pleaded guilty in October to one count of lying about using encrypted messaging in October 2017 to tell a journalist identified in court filings only as “Reporter #3” about a subpoena issued by the committee. He also admitted to lying about speaking with three other reporters.

For three decades, he was the Senate committee’s director of security, whose duties included overseeing the handling of secret and top-secret information turned over to the panel by the intelligence community for oversight purposes.
. . .
“I compounded the lapse in judgment by sharing information with reporters after that relationship ended,” he said. “I lied to protect my wife, my sons, and selfishly I lied to protect myself and my job.” 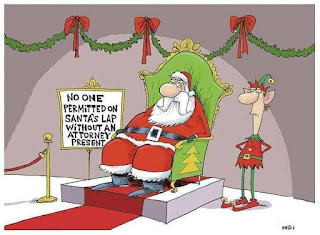 It's pretty clear that he leaked doctored copies of the Senate's unredacted copy of the Carter Page FISA warrants to his NYT reporter/mistress Ali Watkins. It's good to know that it doesn't contain any classified information. That the NYT has never leaked the unredacted version speaks to the fact that it is unhelpful to the Russia collusion narrative. Release them! Julie Kelly at American Greatness, James Wolfe: The Liar No One Is Talking About


But here is the real injustice: While it was clear by both the original indictment and the sentencing memo that Wolfe was responsible for disclosing details about the FISA warrant on Trump campaign aide Carter Page, he was not charged with that crime—a felony punishable by up to 10 years in prison.

The investigation into Wolfe began after the Washington Post published an explosive story in April 2017 confirming that the FBI had obtained a FISA order right before the election to spy on Page.

“There was probable cause to believe Page was acting as an agent of a foreign power, in this case Russia,” the Post reported. “This is the clearest evidence so far that the FBI had reason to believe during the 2016 presidential campaign that a Trump associate was in touch with Russian agents. Such contacts are now at the center of an investigation into whether the campaign coordinated with the Russian government to swing the election in Trump’s favor.” The information was given to the reporters “on the condition of anonymity because [the sources] were not authorized to discuss details of a counterintelligence probe.”

Wolfe lied to the FBI when he denied having any contact with three Post reporters: The sentencing memo confirms Wolfe spoke to Nakashima several times between late 2015 and mid-2017.

Prosecutors also note that Wolfe “received, maintained and managed” Page’s top-secret FISA application. On the same day it was transported to the Senate Intelligence Committee—March 17, 2017—he exchanged 82 text messages with Watkins and had a lengthy phone conversation with her.

The length of the FISA application? Eight-two pages. 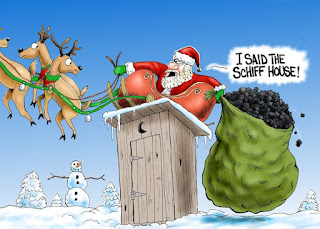 Trump lashed out at Whitaker after explosive Cohen revelations
CNN:


President Donald Trump has at least twice in the past few weeks vented to his acting attorney general, angered by federal prosecutors who referenced the President's actions in crimes his former lawyer Michael Cohen pleaded guilty to, according to multiple sources familiar with the matter.

Trump was frustrated, the sources said, that prosecutors Matt Whitaker oversees filed charges that made Trump look bad. None of the sources suggested that the President directed Whitaker to stop the investigation, but rather lashed out at what he felt was an unfair situation.

The first known instance took place when Trump made his displeasure clear to acting attorney general Matt Whitaker after Cohen pleaded guilty November 29 to lying to Congress about a proposed Trump Tower project in Moscow. Whitaker had only been on the job a few weeks following Trump's firing of Jeff Sessions.

Yes, the SDNY's trick of forcing Cohen to plead guilty to an arguable non-crime (alleged campaign violations for paying off blackmailing women) involving Trump in exchange for leniency on tax evasion not involving Trump was dirty, and the AG should intervene. 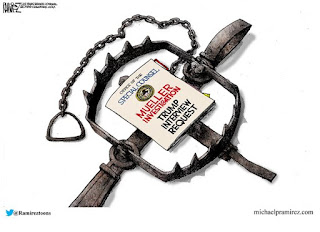 The Babylon Bee: Mueller Orders Trump To Sit On Scale To See If He Weighs The Same As A Duck. You have to really stretch things to parody current events. Mystery foreign company continues court battle over possible Mueller subpoena, which is odd because they'll never be held to account anyway. It's all Kabuki theater.

Wapoo Bushy Never-Trumpist Michael Gerson: If Trump’s actions aren’t impeachable, then what is?. He isn't one of us, and he was never supposed to win!

Sultan Knish: What the Russian Trolls Were Really Doing in 2016. They were doing their damnedest to hurt the person that they were sure was going to win the election.

That doesn’t fit the narrative, so it’s dismissed as confusing.

When Russia posted pro-Trump material, it’s touted as proof of Russian backing. But when the Russians supported Bernie Sanders, Justin Trudeau or other leftists, suddenly “it’s not what it looks like.”

But if the Russians had set out to influence elections in swing states (a popular lefty conspiracy theory) they were doing a particularly terrible job of it since 152 ads targeted New Yorkers, 127 ads were aimed at Texans, 75 at Californians and only 42 at people in Florida. Pennsylvanians were neglected with only 25 ads while Georgians were barraged with 119 ads.

If their intention was to influence the election, Putin ought to poison a few of them for the shitty research job.

And from Flopping Aces, James Comey: No Fidelity, no Bravery, no Integrity


There is a lesson to be learned from the Russia investigation farce and it could not be more clear.

Never, ever trust the FBI. Ever.

One man has done more than anyone else to destroy the reputation of the FBI.

One should never "trust" the government. The government is composed of people much like you and me, some good, even great, some bad, even evil, but most on the spectrum in between. They have the same failings, but more power. That's why we need to keep government as small as possible, and provide lots of checks to their power to influence our lives. They will always seek more
Posted by Fritz at 10:22 AM