Yesterday we started a new arc in the Russiagate story, how a New York Times (and formerly Buzzfeed) reporter, Ali Watkins was trading sex for leaks with her paramour, Head of Security for Senate Select Committee on Intelligence, James Wolfe. Wolfe has been indicted by the DOJ for lying to the FBI about his relationship with Watkins, and their email and text conversations have been being monitored, causing the New York Times to suddenly care about government surveillance again. Let's go to Ace first: Deep State Throat: Head of Security for Senate Select Committee on Intelligence Busted for Leaking to Buzzfeed Reporter, Who Was His... Much Younger Squeeze

The staffer, James Wolfe, was apparently leaking to up to three different reporters, mostly derogatory stuff about Carter Page.


Former Trump campaign adviser Carter Page was the primary target of a Senate Select Intelligence Committee (SSIC) staffer indicted for lying about his contacts with reporters, according to an indictment released on Thursday.
James Wolfe, the former director of security for the SSIC panel, was in contact with at least three reporters at around the time they published articles about Page, an energy consultant who is a central player in the investigations into possible collusion between the Trump campaign and Russian government.
Wolfe, 57, is charged with lying to the FBI during a Dec. 15, 2017 interview about whether he knew the journalists and had contact with them on certain dates. In one case, Wolfe denied knowing a reporter with whom he had been in a romantic relationship for four years. He is also charged with lying about giving that reporter, Ali Watkins, information about Page.
The indictment cites one message that Wolfe wrote in December to Watkins, a former BuzzFeed reporter who now works for The New York Times.
"I always tried to give you as much information that I could and to do the right thing with it so you could get that scoop before anyone else," Wolfe wrote to Watkins, whom he dated from December 2013 to December 2017.

Talk about pumping someone for information.

Jordan Schachtel has some interesting ideas and speculations in this series of twitter posts. 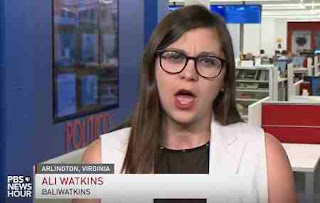 
. . .  And after writing that lead paragraph in the Official Neutral Objective Journalism Style, now permit me to add: BWAHAHAHAHAHAHA!

Don’t ever lecture me about “journalism ethics,” you bastards.

All that “full disclosure” business about “conflicts of interest”? Trying to guilt-trip an honest man about a few free beers with Republican operatives who just happened to be useful sources? Not me, baby. I was never ashamed of smoking cigarettes with Herman Cain’s campaign director Mark Block or having beers and pizza with Rick Santorum and his finance director the weekend before the Iowa caucuses. You do whatever it takes to get the story, and there’s no shame in that. The whole point of Gonzo is to be more or less blatant about your biases, as if any reader of Hunter S. Thompson could be mistaken about his opinion of Hubert Humphrey, “a treacherous, gutless old ward-heeler who should be put in a goddamn bottle and sent out with the Japanese current.”

So, no “ethics” lectures from you thieving bastards at the New York Times, or Politico, or BuzzFeed, or whoever is currently employing Dave Weigel and his various friends in Neutral Objective Journalism. Look, Dave’s a friend of mine, and I would never burn a friend. Good relationships are based on reciprocity and trust, and I owe Dave a few favors, so I would certainly never do anything to hurt my friend Dave.

Never mind all that. Veiled threats were never my style, but I know a thing or two about the behavioral patterns of herd animals, and the universal contempt for Our President among the left-wing hacks of the D.C. press corps is hardly a secret, unlike the classified information that James Wolfe was handing over to Ali Watkins in exchange for sucking his middle-aged penis. Heckuva job there, Miss Watkins. . .


What’s more interesting to me is the reporter’s role in all of this and the reaction coming from the media. Ali Watkins “declined to comment” last night, but she’s supposedly the one who had been dating Wolfe and then conveniently coming up with some big scoops. The seizure of her phone and other records related to her source brought swift condemnation from the Gray Lady, which released a statement saying such an intrusion would “endanger reporters’ ability to promise confidentiality to their sources and, ultimately, undermine the ability of a free press to shine a much needed light on government actions.”
. . .
But were any of these leaks from the Mueller probe actually blowing the whistle on government malfeasance? The Senate Intelligence Committee was conducting an investigation, and it was potentially a very sensitive one. That’s their job. And Wolfe’s job was to shepherd around sensitive documents and keep them safe. I’ve yet to hear any allegations that the committee was somehow failing in their duties or acting improperly. Wolfe wasn’t blowing the whistle. He was giving his girlfriend a juicy leak which would draw major attention while casting a cloud of negative buzz around the Trump administration. In doing so, other people who might possibly have been involved in whatever they were investigating could have been forewarned and gone to ground.

Digging out secrets from a committee engaged in that sort of work before they were finished and ready to release their findings isn’t whistleblowing or protecting the public. It’s damaging the process and risking other sources, all apparently in the name of generating bad headlines for the White House. I’m having a hard time feeling too much sympathy for either Wolfe or Watkins this morning, honestly.

Via Wombat-socho's "In The Mailbox: 06.08.18" Twitchy explains how BuzzFeed stands to lose in this: ‘MY GOD’: Daily Caller’s scoop on Ali Watkins and James Wolfe could spell BIG trouble for BuzzFeed


But just in case you thought the plot couldn’t get any thicker … buckle up. Because before working at the New York Times, Watkins was a reporter at BuzzFeed. Last night, BuzzFeed’s editor in chief Ben Smith said he was “deeply troubled” by the DOJ’s “interfering with” Watkins’ “constitutional right to gather information about her own government, but

SCOOP: BuzzFeed News confirms to me that its editors knew about the romantic relationship between Ali Watkins and James Wolfe, chose not to disclose this fact on her articles anyway in what appears to be a major ethical lapse.

You weep for journalistic integrity, and you curse the "failing NY Times." You have that luxury. You have the luxury of not knowing what I know, that sleeping with sources, while gross, obtains scoops, and #AliWatkins, while grotesque and incomprehensible to you, obtained scoops
— Andrew Kloster (@ARKloster) June 8, 2018


People who watch House of Cards tell me there was a Buzzfeed reporter on the show sleeping with a much older man for tips.

So on a scale of 1 to ethical, how does everyone feel about pulling a @RealZoeBarnes for story ideas? #TOTALLYKIDDING @HouseofCards
— Ali Watkins (@AliWatkins) June 20, 2013

Well, you can't say Ali Watkins won't do what it takes to get the story!

In other matters that arise, Michael Avenatti apologizes: “I Owe An Apology To The Pig For Associating Giuliani With A Pig” You'd think being from New York, he could do better stand up.
Posted by Fritz at 7:47 AM