A roundup of responses to Horowitzmas. From Wombat-socho's "In The Mailbox: 06.14.18" Power Line has some Notes On The IG Report:


1) It is important to remember that the IG has not looked into the FBI’s “Russia investigation,” including its continuance by Bob Mueller, and today’s report does not specifically address issues raised by the FBI’s and DOJ’s handling of that matter. However, some of the same people were involved in both investigations, and the IG has disclosed limited materials relating, at least in part, to the Russia investigation. At this point, they are some of the most interesting aspects of the report. But such disclosures are incidental and non-systematic. There could be a great deal more where they came from.

It's easy to overlook. This isn't the end. It's the end of the beginning. Via Wombat-socho's "In The Mailbox: 06.15.18", Tom Maguire at Just One Minute claims there's Something For Everyone From The IG

Even the flailing NY Times felt obliged to admit the IG report was not all roses and chocolate for Hillary supporters and Trump bashers.
. . .
Yeah, yeah. This will not satisfy either side. Not to suggest I have any idea what would. 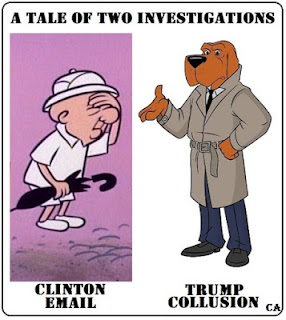 
The trick here is the premise the IG establishes from the start: It’s not my job to draw firm conclusions about why things happened the way they did. In fact, it’s not even my job to determine whether investigative decisions were right or wrong. The cop-out is that we are dealing here with “discretionary” calls; therefore, the IG rationalizes, the investigators must be given very broad latitude. Consequently, the IG says his job is not to determine whether any particular decision was correct; just whether, on some otherworldly scale of reasonableness, the decision was defensible. And he makes that determination by looking at every decision in isolation.

But is that the way we evaluate decisions in the real world?
. . .
How do you best evaluate the FBI’s approach to the Clinton case? Well, if I may invoke that term again, common sense says you look at how the same agents handled another case which bore on the same event that informed their every decision, the 2016 election. The question is not whether every Clinton-case decision was defensible considered in isolation; it is whether the quality of justice afforded to two sides of the same continuum by the same agents at the same time was . . . the same.

Jim Geraghty at NR: This Is a Very Bad Report for the FBI


This is why you don’t want to rush a response to a 500-page inspector-general report. Former FBI Director James Comey, writing on the New York Times op-ed page, posted just a short time ago:


First, the inspector general’s team went through the F.B.I.’s work with a microscope and found no evidence that bias or improper motivation affected the investigation, which I know was done competently, honestly and independently.


. . . these text messages also caused us to assess Strzok’s decision in October 2016 to prioritize the Russia investigation over following up on the Midyear-related investigative lead discovered on the Weiner laptop. We concluded that we did not have confidence that this decision by Strzok was free from bias.


Nevertheless, we found that Page’s statement, on its face, consisted of a recommendation that the Midyear team consider how Clinton would treat the FBI if she were to become President in deciding how to handle Clinton’s interview. Suggesting that investigative decisions be based on this consideration was inappropriate and created an appearance of bias.

Also at NR, notorious Never-Trumper David French: Yes, Hillary Should Have Been Prosecuted. In a normal investigation intent would be inferred from the actions of the people being investigated, and their possible motives. In the Clinton investigation, the fact that it was never formally written down was taken as proof of lack of intent. Of course, who knows what's in the missing 30k emails. . . .

David Harsanyi at the Federalist: 3 Takeaways From The IG Report That Seriously Undermine The FBI’s Credibility

Page: “(Trump’s) not ever going to become president, right? Right?!”

According to the IG, Strzok claims he doesn’t remember sending the text, BUT he also somehow remembers that text was “intended to reassure Page that Trump would not be elected, not to suggest that he would do something to impact the investigation.”

Now, texts don’t necessarily prove an agent acted unprofessionally. Maybe Strzok was showing off to his lover. Maybe Strzok was blowing off steam. But if a law enforcement agent charged with scrutinizing your business says he’s going to “stop you” — on top of dozens of other statements demonstrated high levels of prejudice, including one self-righteous exchange where he praises himself for being in a position to stop the Trump “menace” — would you consider that person professionally unbiased? There’s no reasonable argument that can guarantee that this agent’s work was uncontaminated by his animosity for Trump.
. . .
The Reaction of the DOJ

If this text did nothing to undermine the integrity of the investigation, why didn’t the DOJ turn it over to congressional investigators? Why didn’t the DOJ inform investigators about Strzok’s improper conduct? Did someone erase this specific line before handing over the other texts to Congress? Who okayed it, and why?
. . .
Comey

Former FBI director James Comey’s actions are roundly condemned in the report. The IG concludes he violated long-standing procedure and policy, and basically did whatever his capricious idealism told him to do. The more you read the IG report, the more obvious it becomes that Comey had absolutely no basis for clearing Hillary. . .

2) Comey was one of the few people in the world that didn’t know that Huma Abedin was married to Anthony Weiner. . . .

3) For those who believe that the reopening of the Hillary Clinton Email investigation two weeks before the election helped Trump win–guess what? Don’t blame it on Comey, blame it on Peter Strzok and Lisa Page the FBI lovers and the ultimate Trump haters. . . .

4) According to the IG, the FBI, supposedly the best law enforcement agency in the world may have taken bribes from the press in exchange for leaking information. . . .

5) Strzok, the first FBI investigator of any Russia/Trump connections, and hater of President Trump believed there was nothing to the Russia collusion charges. . . .

Not to be out done and never at a loss for words Ben Shapiro has 12 Things You Need To Know About The Inspector General's DAMNING Report on The FBI's Hillary/Trump Conduct #7 "The FBI Agents Prioritized The Russia Investigation Above The Hillary Investigation Reopening. "

IBD Editorial: The IG Report Shows That The Fix Was In From Start Of The Clinton Email Investigation You just have to read between the lines. Even MSNBC Admits New Strzok Texts are Damning. Devlin Barrett, Karoun Demirjian, John Wagner and Matt Zapotosky at WaPo: Inspector general blasts Comey and also says others at FBI showed ‘willingness to take official action’ to hurt Trump. Instapundit: "MY TAKE ON THE OIG REPORT: It’s 500 pages long, it’s got some serious dirt in it, but overall it’s a modified limited hangout. There’s much worse stuff still waiting to be reported. Or not reported." Andrew Klaven: Justice Leadership Is Not Coming Clean. He should have read his own piece and not let some AI do it. Go see what I mean! But from across the pond at the Daily Mail: 'We’ll stop it': Justice Department inspector general says texting FBI lovers talked about keeping Trump from becoming president – yet insists there was no 'political bias' in Hillary Clinton email probe

A "Republicans Seize" sighting from Robert Costa at WaPo: Trump allies seize on DOJ report as they seek to undercut Mueller probe. A sure sign that they're not very happy about it.

Allah Pundit at Hot Air: Hillary Mocks Comey For IG Revelation That He Used Private Email Sauce for the goose and all.


The IG found that Comey’s habit of forwarding emails to his personal account was “inconsistent” with DOJ policy that official business should be conducted via personal email only when “exigent circumstances” require, a perfectly fair wrist slap. But what Comey did and what Clinton did are night and day. Comey used a personal account at Gmail, with all of the security that Google provides. Hillary used a personal homebrew server, which didn’t have the same robust security. Comey’s usage seems to have been for personal convenience with respect to certain messages containing attachments. Hillary’s usage was comprehensive — all messages routed to her personal server, which reeks of an effort to evade automatic archiving by government servers. And of course Comey’s use was confined to unclassified business. Hillary’s wasn’t, which is a big deal. And which, again, is why he would have been perfectly entitled to recommend indicting her. There’s staggering hypocrisy in Comey’s email practices, in other words, only if you overlook literally all of the distinguishing features that made her practices so risky and potentially criminal.

And I still have over a page of unused Russiagate links. Sigh . . .
Posted by Fritz at 9:41 AM