As expected, in his behind closed door congressional grilling testimony, Peter Strzok claims his promise to his lover Lisa Page was just ordinary pillow talk texting, between two high powered officials with motive and perhaps means to actually accomplish it. Ace: Peter Strzok: My Texts Promising To Stop Trump Were Just Intimate Messages Between Intimate Friends

He was speaking behind closed doors to the House committee looking into this.

“There is new information that was not included in the IG report,” Meadows said, but he would not say what it was
— Manu Raju (@mkraju) June 27, 2018


It really is extraordinary that Strzok’s obvious bias against Trump (and for Hillary) has been completely excused as just a private matter. That’s despite the fact that Strzok was clearly discussing his professional responsibilities on several occasions.

Also, someone tried very hard to hide his text about stopping Trump, so much so that it took repeated efforts by the IG to recover the “we’ll stop him” text. Does the attempt to deep-six that particular text message show consciousness of guilt? If this was all just idle chatter among intimate friends, why hide it?

Joshua Caplan at Breitbart:  Lawmakers Demand Mueller Unmask Team Members to Root Out ‘Politically Biased Investigators’ I hope they're not holding their breath.

The seven GOP lawmakers told Rosenstein they are “disturbed” by the perceived anti-Trump bias demonstrated by FBI agent Peter Strzok and attorneys Lisa Page and Kevin Clinesmith — previous members of Mueller’s team. They are asking for the names of every staffer working on the probe — previous and current — over concerns “there may be more politically biased investigators.”

“We know that these biases were shared among multiple people at the FBI and could be easily uncovered by Mr. Mueller with simple vetting,” the Congressmen wrote the Justice Department’s second-highest ranking official. “These individuals should not have been given an opportunity to influence – directly or indirectly – this special counsel investigation.”

Despite excoriating the Mueller team for their monomaniacal aim to squeeze President Trumps associates Virginia Federal Judge: Mueller can continue to prosecute Manafort for matters unrelated to the campaign  (William A. Jacobson, Legal Insurrection)  “Here, we have a prosecution of a campaign official, not a government official, for acts that occurred well before the Presidential election” Judge in Virginia lets case against Manafort move forward (WaPo)


He ended the opinion with a word of caution to prosecutors: “Although this case will continue, those involved should be sensitive to the danger unleashed when political disagreements are transformed into partisan prosecutions.”

Yet none of those concerns were enough to dismiss the indictment.


The secret intelligence document purports to show that Lynch told the Clinton campaign she would keep the FBI email investigation on a short leash - a suggestion included in the Inspector General's original draft, but relegated to a classified appendix in the official report and entirely blanked out.

From Wombat-socho's "In The Mailbox: 06.27.18", The Victory Girls think Mueller Russia Probe Looks For Fall Conclusions


The “UK Daily Mail” has a headline “Mueller probe focus is on whether Trump obstructed justice and could issue MORE indictments within months” that is sure to put a song in the hearts of “Never Trumpers”, Resistance types and Pussy hat wearers everywhere. From the article:


Special Counsel Robert Mueller is kicking his Russia investigation into high gear with an eye toward producing some conclusions by this fall.
Those findings could include indictments from the team of officials looking into possible collusion between Donald Trump’s presidential campaign and Russians who sought to influence the 2016 contest, a source told Bloomberg News.
Mueller’s office officially declined to comment to the news outlet.

Conclusions by the Fall of 2018. Charming. One would think, if one is a being grounded in reality, the collusion with Russia and obstruction of justice would be fairly big crimes with like, I don’t know, evidence and stuff that would have been obvious. Since Special Counsel Robert Mueller was appointed by Deputy Attorney General Rod (Boo, Hiss) Rosenstein way back on May 17, 2017, he has investigated anyone who has ever walked past Trump Tower (trademark, all rights reserved) and doesn’t seem to have found very much. Although he has ruined quite a few lives (See also: Flynn, Michael T., Lt. General, U.S. Army, Ret.). 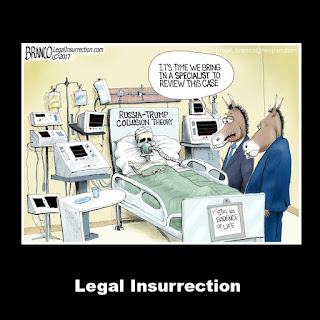 Or as William Teach at Pirate's Cove has it, Mueller To Finally Focus On Russia Russia Russia At Some Point In The Future. Actually, probably not since he's handed most of the Russia stuff off to low level DOJ flunkies. Jason Beale at the Federalist: Why Did DOJ And FBI Ignore Lack Of Evidence For Russiagate? They Fell In Love With Their Source. They say an English accent makes someone seem 10 IQ points smarter to most Americans.


The FBI fell in love with their source. The information Christopher Steele was providing so perfectly fit into a narrative of collusion and conspiracy by the Republican presidential candidate and his staff that it was impossible to ignore, and almost too good to check. They tried to check it—desperately, I would guess—yet, according to those who have read the four separate Foreign Intelligence Surveillance Act (FISA) packets on Carter Page, they were never able to verify the information he provided.

There are two paths available when facing this situation. You can either dump your source and alert the intelligence community of your inability to verify the source’s information, or you can ignore the flashing red lights and rationalize the inconsistencies.

This information made sense, after all. It was explosive, it was sensational, and it was damning. If it was true, the ramifications—to the election, to the Trump team, to the nation, and to the FBI—were mind-boggling. To again paraphrase Deputy Assistant Director Strzok, we’re talking impeachment here.

Harold Finch: "And now we know why James @Comey killed any deal with @JulianAssange - because assange was going to prove the Russia DNC hack & election […]" 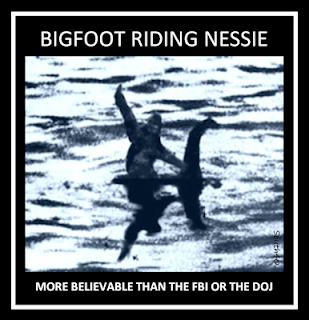 Tom Maguire at Just One Minute: When Trust is Gone...


Was Crossfire Hurricane launched as part of an entrapment exercise to take out insurance against a Trump Presidency? I have no idea if this is true but it certainly strikes me as plausible, which is an alarming comment on my cynicism at a minimum and public distrust of our 'establishment' at worst. Well. I have sounded this kazoo before.

The News Junkie at Maggies Farm: If it turns out that Trump really is a Russian agent...


I think Trump admired Putin only for being another alpha male who puts his country's interests first. Trump relates to alpha guys, so that's his preference. He does not care for weasley boys like Justin, and that's his choice. Not many alphas in the press corps, so there's that too.
. . .
He was not my choice, but my choices would have lost to Hillary. As a communicator, Trump makes Reagan and Obama seem like amateurs - and he just wings it. His job seems recreational to him.

As an uncouth outsider, naturally the establishment hates him. That's why he was elected. If it turns out that Trump really is a Russian agent, I'll gladly change my mind about the whole Trump thing.

However, it appears that many US government agencies were working hard to prevent Trump a year before the election, and to undermine him afterwards. If true, it would be the biggest political scandal in US history. Seven Mysterious Preludes of the FBI's Trump-Russia Probe

Sure looks like a CIA/FBI string to me. Who arranged that?

Allahpundit: Are You Ready For President Michael Avenatti? "Dude, I think he might be thinking about it. No joke."

Off topic – the candidate in 2020 better be a take no prisoners street fighter who is prepared to go 15 rounds in a VERY brutal campaign. It will be a cage match like no other in modern times. The future of the republic may depend on it.
— Michael Avenatti (@MichaelAvenatti) June 27, 2018