Signs the Mueller investigation is stalling out from Vanity Fair's Abigail Tracy, as Mueller starts looking to exclude unfavorable potential jurors: Is Mueller’s Team Worried that Trump’s Strategy Is Working?

According to an eight-page motion filed with the Eastern District Court in Virginia on Thursday, the prosecution is concerned that the extensive media coverage of the Trump-Russia probe and the criminal case against Manafort—some of which, it argues, is inaccurate—has biased potential jurors. “Where there has been significant media attention to a prosecution, courts often employ jury selection procedures to help identify prejudice that may exist,” Andrew Weissmann, one of Mueller’s lead prosecutors, wrote in the filing. “Both the Special Counsel’s investigation and this case in particular have received significant public attention. Potential jurors may have biases or pre-formed opinions as a result.” Media references to the Manafort case and to Mueller’s probe number well into the thousands, Weissmann notes, and will only increase as Manafort’s two trials, scheduled in July and September, approach.

To mitigate bias, Weissman proposed that potential jurors answer a questionnaire to determine their exposure to coverage of both cases. This, said legal experts I spoke with, is not an unusual practice—in fact, said William Jeffress, a white-collar defense attorney who worked on the Valerie Plameleak case, it is “very common” in high-profile cases. What is unusual, Jeffress said, is that Mueller’s team independently proposed the questionnaire, and provided 52 potential questions. “Proposed questionnaires are almost always submitted by the defense, or jointly by the prosecution and defense. The remarkable thing here is that the prosecution, not the defense, is seeking the questionnaire,” he told me. “That tells me the Mueller team is concerned about publicity prejudicial to the government.”

Most of the question appear to be standard boiler plate, but this one seems a little pointed. No skeptics allowed!


32. In this case, the United States is represented by the United States Department of Justice through Special Counsel Robert S. Mueller, III. Is there anything regarding the Special Counsel’s Office that would prevent or hinder you in any way from rendering a fair and impartial verdict in this case based solely on the evidence presented and the Court’s instructions on the law?

Thomas Lifson at the American Thinker: Facing humiliation, Mueller backs away from prosecution of Russian entities


The Mueller special counsel investigation purportedly was instigated to discover possible illicit Russian influence on the 2016 presidential election but now is backing away from the only indictments aimed at Russian entities, leaving only alleged process crimes (such as General Flynn's alleged false statement to the FBI) and alleged crimes that occurred long before the Trump candidacy (such as Paul Manafort's Ukrainian connection).
Devlin Barrett writes in the Washington Post:


In a pair of court filings Friday, the special counsel added four assistant U.S. attorneys to the case against Russian entities and people accused of running an online influence operation targeting American voters.
People familiar with the staffing decision said the new prosecutors are not joining Mueller's team, but rather are being added to the case so that they could someday take responsibility for it when the special counsel ceases operation. The case those prosecutors are joining could drag on for years because the indictment charges a number of Russians who will probably never see the inside of a U.S. courtroom. Russia does not extradite its citizens.

What on Earth could cause a prosecutor to walk away from his central mission to focus instead on incidental and tangential matters? Barrett's use of the words "take responsibility" for the case is the answer. Though not a word of it appears in Barrett's article, the prosecution of the Russian entities has already turned into a farce, as Mueller is caught in a trap of his own making with the hasty indictments of entities he never expected to defend themselves. So slipshod was the work that one of the indicted entities was not even an incorporated entity (i.e., it did not exist) at the time of the alleged offenses.
. . .
Have you ever heard of anyone "farming out" the central mission of a multi-million-dollar operation in order to focus on tangents? Even though the Trump-hating media will refuse to mention it, this move is a confession that Mueller is cutting his losses and leaving others to take the blame when the case collapses.


Yahoo! DOJ gives Congress new classified documents on Russia probe. The first thousand of a million or so. And you know the bad ones will be hidden until the very end, sometime in the future so far away no one will care anymore except historians, if they still exist. In yesterday's missive from Andrew McCarthy, he warns Look to Trump, Not Trey Gowdy, to Address Bias at the FBI and DOJ


. . .Which brings us to the strange dynamic that has infected today’s inter-branch clash from the start.

It is fair to ask whether this dispute is about accountability or theater.

Rosenstein and Wray work for Trump. And they are not Obama holdovers; they are Trump appointees. If they are defying Congress, it is because the president is permitting them to do so. Twitter tantrums and dark deep-state conspiracy theories don’t count; the president is empowered give his subordinates a direct order to comply with Congress’s demands, and to fire them immediately if they fail to do so. The president has the unilateral authority to disclose executive-branch files to lawmakers, including classified documents. Trump could have done this any time in the last 18 months.
. . .
The president and his staff have suggested that Trump must stay out of the fray because Special Counsel Mueller is investigating him for obstruction, and his political foes would accuse him of interfering in that investigation if he asserted himself. That is specious. As we’ve recently observed, the absence of any credible obstruction case is even more obvious after last week’s inspector-general report; the executive branch’s lawful compliance with Congress’s oversight demands cannot obstruct justice; and, as noted above, Trump has been harassing his underlings with tweets anyway — i.e., if putting pressure on the DOJ and FBI is the stuff of obstruction allegations, that ship has already sailed.

FBI investigator Sally Moyer complained in another message, “fuck trump,” and told a colleague she would consider any presidential award for public service from Trump an “insult.” “I’d refuse it,” she wrote.https://t.co/eQ4QVrCZXf
— Paul Sperry (@paulsperry_) June 22, 2018

According to the New York Post’s Paul Sperry, among the incendiary messages Moyer exchanged with her FBI man, she called Trump’s supporters “retarded” and claimed she would quit “on the spot” if he won the presidency:


“Moyer, in an Oct. 28, 2016, instant message, said she was ‘sick’ of Trump and later called his supporters ‘retarded.’ On Election Day, she said Clinton had ‘better win … otherwise I’m gonna be walking around with both my guns … and like quitting on the spot,’ adding, ‘Screw you, Trump.’” 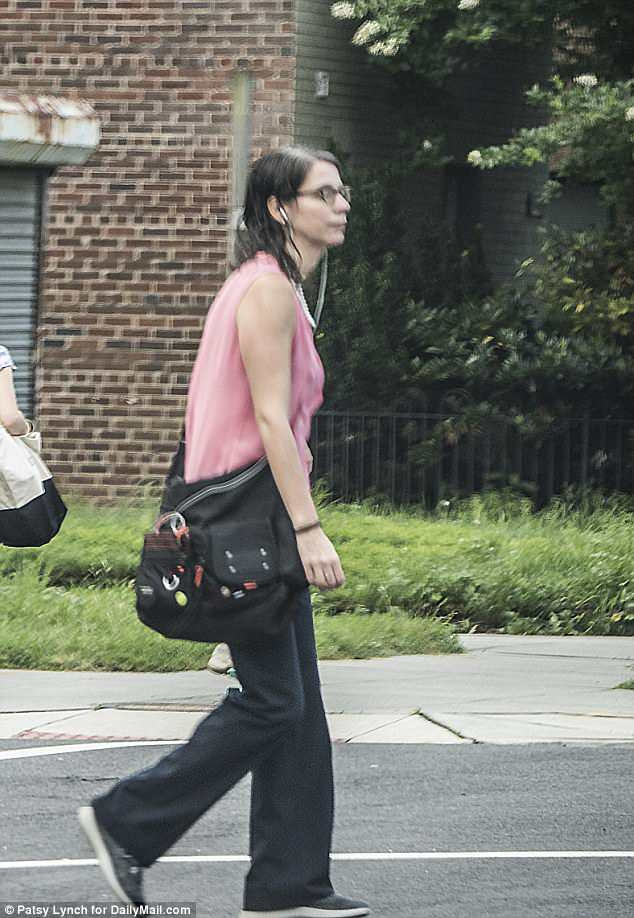 Oh please, quit; after you're indicted.


The IG report discovered no specific investigative tampering in the Hillary examination. But still:

On Friday, the Daily Mail published the first photos of the operative since she was identified. She refused to speak with a reporter.


Moyer - an attorney and registered Democrat identified in the Inspector General's report as "Agent 5" is a veritable goldmine of hate, who had been working for the FBI since at least September of 2006. When Moyer sent the texts, she was on the "filter team" for the Clinton email investigation - a group of FBI officials tasked with determining whether information obtained by the FBI is considered "privileged" or if it can be used in the investigation - also known as a taint team.


Moyer exchanged most of the messages with another FBI agent who worked on the Clinton investigation, identified as 'Agent 1' in the report.
Moyer and Agent 1 were in a romantic relationship at the time, and the two have since married, according the report. Agent 1's name is being withheld. -Daily Mail

That should be an easy one to figure out, if she's married to him now. I don't usually approve of doxxing, but this coven of vampires needs daylight.


Some of Moyer's greatest hits:

And speaking of subpoenas, according to "Tyler Durnden" at Zero Hedge: Comey And Lynch Will Be Subpoenaed By Senate Unless Feinstein Obstructs But then, obstruction is one thing we can almost always count on. Bradford Betz at Fox News: Ashamed' Comey weighs calling himself Canadian, rips Trump border actions during Ireland visit. That's great, but after you serve your sentence in the US.

Victor Davis Hanson at the Hoover Institution wonders what might have happened if Hillary hadn't used her private server, had campaigned in the purple states she lost, and hadn't been such a poor loser in Hillary’s Hamartia. An educational essay, but kind of useless, because then she wouldn't be the same Hillary we know and hate.


Sophocles, Euripides, and the Greek epic poets, historians, and tragedians explore the idea of hamartia. Such an innate character flaw, such as Oedipus’s self-regard or Jason’s obtuseness, can be repressed, but it will inevitably resurface at the most inopportune moment. From Clinton’s cattle-future imbroglio and the “missing” Rose Law Firm files to the Uranium One and Clinton Foundation scandals, Clinton for over 40 years has never much worried about the wages of chronic deception and ends-justifying-the-means morality.

The next step in the slow cycle of classical self-destruction is koros—a greed or overreaching ambition that is the result of hamartia. It thus deludes the apparently successful into believing there will be few consequences to their excess. Koros makes self-reflection impossible. As first lady, Senator, Secretary of State, and a presidential candidate, Clinton saw no ostensible connection between her character flaws and a lack of success. Indeed, her fabrications, excesses, and deceptions previously led to ever-greater career advancement, and were seen as integral to her good fortune.

And here's a name we haven't heard in a while: Via This Ain't Hell, But You can see it from here,  Fox News:  Reality Winner to plead guilty in national security leak case:


Reality Winner, the former National Security Agency (NSA) contractor who was accused of leaking a classified report to a news outlet, will reportedly plead guilty as part of a plea deal.

Winner, 26, is being held at the Lincoln County Jail near Augusta, Georgia. She was arrested in June 2017 for allegedly feeding a classified report with information on Russia's involvement in the 2016 presidential election to the outlet.

Stealing a page out of the Sandy Berger playbook, she snuck the secret document out in her pantyhose.
Posted by Fritz at 9:45 AM