Did Affirmative Action Wreck the Fitz?

Stacy McCain got this letter anonymously:


Hi, Stacy.
During the early weeks after the USS Fitzgerald was speared by a lumbering Philippine container ship, it was noteworthy that the captain and a couple of admirals were publically named, but not the actual officer in charge, the officer of the deck. (OOD) The other person who should have kept the Fitz out of trouble is the person in charge of the combat information center, the Tactical Action Officer. That individual is supposed to be monitoring the combat radar, which can detect a swimmer at a distance of two miles.
Not until a year later, when the final reports are made public and the guilty parties have been court-martialed, does the truth come out. The OOD was named Sarah, and the Tactical Action Officer was named Natalie, and they weren’t speaking to each other!!! The Tactical Action Officer would normally be in near constant communication with the OOD, but there is no record of any communication between them that entire shift! 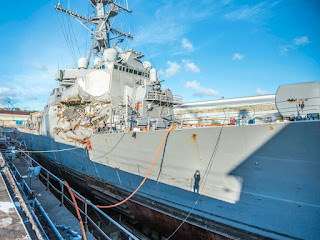 What, women not talking to other women? How could that be!

Another fun fact: In the Navy that won WWII, the damage control officers were usually some of the biggest and strongest men aboard, able to close hatches, shore up damaged areas with timbers, etc. The Fitz’s damage control officer was also a woman, and she never left the bridge. She handled the aftermath of the accident remotely, without lifting a finger herself!
Look it up: The OOD was Sarah Coppock, Tactical Action Officer was Natalie Combs. . . .
When I noticed last year that they were doing all they could to keep the OOD’s name out of the headlines, I speculated to my son that it was a she. Turns out all the key people (except one officer in the CIC) were female!

Indeed, I did some searching, and Lt. Coppock pleaded guilty to dereliction of duty. Lt. Combs faced a hearing last month:


In an 11-hour hearing, prosecutors painted a picture of Lt. Irian Woodley, the ship’s surface warfare coordinator, and Lt. Natalie Combs, the tactical action officer, as failing at their jobs, not using the tools at their disposal properly and not communicating adequately. They became complacent with faulty equipment and did not seek to get it fixed, and they failed to communicate with the bridge, the prosecution argued. Had they done those things, the government contended, they would have been able to avert the collision.

That two of the officers — Coppock and Combs — involved in this fatal incident were female suggests that discipline and training standards have been lowered for the sake of “gender integration,” which was a major policy push at the Pentagon during the Obama administration. It could be that senior officers, knowing their promotions may hinge on enthusiastic support for “gender integration,” are reluctant to enforce standards for the women under their command.

I hope it's not gender specific lack of training that caused the incident, but I'm not ready to rule it out. However, ultimately, the ships Captain, in this case, Cmdr. Bryce Benson, is ultimately responsible for the actions of his crew. If he didn't believe they were up to the job, he shouldn't have been using them. If he thought the people the Navy was sending to him were incompetent, it was his duty to either make them competent or keep them out of the way.
Posted by Fritz at 6:27 PM