A reporter in Springfield, Mass., resigned from his job Friday after posting a Twitter message falsely stating that Maryland shooting suspect Jarrod Ramos had brought a "Make America Great Again" hat to the office of the Capital Gazette.

Conor Berry, who wrote for the Republican, tweeted an image of a MAGA hat Thursday, and suggested that Ramos had left it behind at the Gazette office after allegedly killing five Gazette employees. 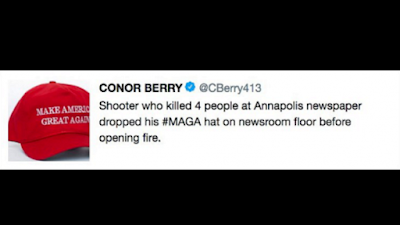 “Folks, My 21-year career as a “journalist,” a fancy term that makes my skin crawl, frankly, came to a screeching halt yesterday with one stupid, regrettable tweet,” Barry wrote. “Can’t take it back; wish I could. My since apologies to all good, hardworking reporters and to POTUS supporters.”

In his resignation letter, Berry conceded that his tweet “taints the good work of fair-minded journalists everywhere.”

Worse and sadly it seems more representative of the press than exceptional. He'll probably start a job as a PR flack for the DNC as soon as his notoriety dies down a bit.
Posted by Fritz at 9:58 AM