The Korean summit having stolen all the oxygen from the media, the amount of Russiagate available today is slight, and largely disjointed. The most amusing thing today is Kellyanne Conway's husband (a legal scholar in his own right) having published this spirited defense of the constitutionality of the Mueller special counsel appointment: George Conway at Lawfare: The Terrible Arguments Against the Constitutionality of the Mueller Investigation

. . . Calabresi argues that Special Counsel Mueller is acting as a principal officer and that, accordingly, Mueller’s appointment violates the Constitution because Mueller was appointed by the acting attorney general, and not by the president with the advice and consent of the Senate. In support of this broad point, Calabresi makes first a specific claim and then a more general one.

His specific claim, made at the outset of his “Legal Opinion,” is that “Robert Mueller has behaved like the 96 [sic] U.S. Attorneys who are principal officers of the United States and who must be nominated by the President and confirmed by the Senate.” His more general, and overarching, claim is that under Supreme Court case law applying the Appointments Clause, Special Counsel Mueller is a principal officer because “because Mueller does not have a boss who is supervising and directing what he is doing.”

Calabresi’s first point—the illustrative comparison between Mueller and the U.S. attorneys—begins with a badly mistaken premise. Without citing anything at all, he repeatedly assumes, in both his op-ed and his “Legal Opinion” paper, that “Congress has specified that the 96 [sic] U.S. Attorneys are all principal officers who must be nominated by the President and confirmed by the Senate.” (Emphasis mine.)

This assumption is just wrong—uncomplicatedly, flatly wrong. It is true that, typically, the 93 (not 96) U.S. attorneys are presidentially nominated and Senate-confirmed. But Congress has established an alternative method of appointment. Title 28 U.S.C. § 546 provides that, until the Senate confirms a presidential nominee, U.S. attorney vacancies can be filled for up to 120 days by an appointment made by the attorney general and then indefinitely by local district courts. Such non-presidential, non-Senate-confirmed appointees are, as one court of appeals has put it, “fully-empowered United States Attorneys, … not subordinates assuming the role of ‘Acting’ United States Attorney.” And such fully-empowered, non-presidentially-appointed U.S. attorneys are not all that uncommon. Today, the sitting United States attorneys in two of the most important judicial districts in the country—the Southern and Eastern Districts of New York—were appointed by the judges of those districts under Section 546(d).

And so “the Congress … by … vest[ing] the Appointment” of U.S. attorneys “in the Courts of law” and “in the Heads of Departments,” obviously recognized that U.S. attorneys are “inferior officers.” But Congress is not the only branch of the government to have reached this conclusion. In 1978, the question was expressly put to the Justice Department’s Office of Legal Counsel. OLC’s conclusion: U.S. attorneys are inferior officers, because the law “authorizes the Attorney General to direct all U.S. Attorneys in the discharge of their duties.”

Not to be left out, members of the third branch—which has made a lot of these appointments—have also agreed. The Supreme Court has never squarely addressed the point under the Appointments Clause, but in discussing presidential removal power in Myers v. United States, the Supreme Court specifically referred to “a United States attorney” as an example of “an inferior officer.” More recently, in Morrison v. Olson, the high court approvingly noted how “Congress itself has vested the power to make [U.S. attorney] interim appointments in the district courts” under 28 U.S.C. § 546(d), and observed that “[l]ower courts have also upheld [those] interim judicial appointments of United States Attorneys” under the Appointments Clause. These lower courts include two federal courts of appeals, one of which rejected an Appointments Clause challenge to a U.S. attorney who had served under a judicial appointment for more than six years.

But it is even worse than that for Calabresi’s thesis—Mueller’s Office of Special Counsel appears, on its face, to be inferior in size and authority than many, if not most, U.S. attorney’s offices throughout the nation. . .

I guess he's not getting any this week. Allah Pundit at Hot air:


My favorite part of this Carville-and-Matalin routine that the Conways are doing (although they’re both Republicans) is how Kellyanne feigns outrage every time someone confronts her about George’s digs at her boss. It’s sexist, she insists. Yeah? If George Conway were White House counsel and Republican strategist Kellyanne Conway was making occasional Twitter wisecracks implying that his boss is a joke who needs to stop whining about Russiagate, you don’t think George might be asked about it by the media? For cripes sake. 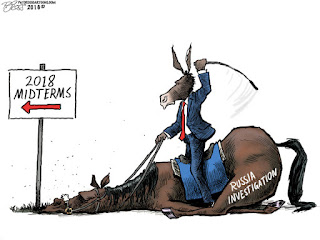 Elizabeth Price Foley at The Hill:  Those who tout Trump’s ‘obstruction’ misrepresent the concept. Deliberately. The real obstruction is getting in the way of their plans to destroy the President.


New York Times reporters recently misrepresented obstruction when they examined a memo sent to special counsel Robert Mueller, in which Trump’s lawyers outlined why accusing the president of obstruction is a waste of time. Beyond the strong constitutional argument that the president cannot obstruct justice when exercising his constitutional authority to fire a subordinate FBI director, Trump’s lawyers also asserted that his acts do not fall within any obstruction statute. The newspaper characterized this argument as a “technical parsing” of the law. This is what lawyers and judges do: We parse statutes to determine if they’re applicable.


The media are in a lather over the Justice Department’s grand-jury investigation of contacts between several reporters and a government source — the former Senate Intelligence Committee security director who has been indicted for lying to investigators about his leaks to the press.

The same media are in a lather over the refusal of the president of the United States, at least thus far, to submit to questioning by the special counsel in the Russia investigation. The president is placing himself “above the law,” they contend, if he rebuffs prosecutors or defies a grand-jury subpoena.

Whether we’re talking about journalists or presidents, the situation is the same: An investigative demand is made on people whose jobs are so important to the functioning of our self-governing republic that they are given some protection, but not absolute immunity, from the obligation to provide evidence to the grand jury. And whether it’s a reporter or the chief executive, the question is: Under what circumstances should they be forced to testify?

The oddity — a very human oddity — is that the press is extraordinarily attuned to its own need for protection but scoffs at the notion that someone with greater responsibilities should have comparable protections.
. . .
Still, it would be nice if the media grasped that they are not the only constitutionally recognized actors who rate some deference. At the moment, President Trump’s lawyers are fighting efforts by the special counsel to pressure him into an interview — perhaps even into testimony before a grand jury. Like journalists, the president has an extremely important job — most would say, the most important job — in our system. Like journalists, the president has a privilege of confidentiality — one that actually has been endorsed by the Supreme Court. And as is the case with the protections afforded journalists by Justice Department regulations and practice, the chief executive’s privilege is not absolute — it must give way when there is evidence of a serious crime, when the president is somehow implicated in that crime, and when the president possesses critical information that cannot be obtained from any other source.

Remember how I've been cautioning against overoptimism regarding IG Horowitz's investigation of the DOJ and FBI? Sara Carter: Lawmakers Warn IG Being Pressured to Slow Roll Clinton FBI Report


The Department of Justice and the FBI are deliberately attempting to slow roll and redact significant portions of DOJ Inspector General, Michael Horowitz’s report on the bureau’s handling of the Hillary Clinton investigation, according to numerous congressional officials and investigators.

The 400-page report, which was completed several weeks ago and addresses Clinton’s use of her private server for government business, is currently being reviewed by the DOJ and FBI. According to sources, individuals mentioned in the reports are also allowed to review the document. It is expected to be “long and thorough” and will criticize the handling of the investigation by former FBI Director James Comey, who has spent the better part of the past several months promoting his book A Higher Loyalty.