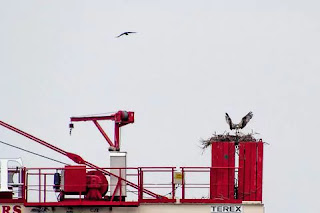 At the paywalled WaPo, so I'll quote extra generously. Osprey nest at a construction crane finds a new home

The osprey had picked a fairly tough spot for a home — a construction crane at a complex in the Wharf area of Southwest Washington’s waterfront.

The area is a perfect habitat for osprey, but the location of the nest worried many neighborhood residents and environmentalists. Experts suspected that the birds had chicks up there but couldn’t be sure and estimated that they would be about four weeks old.

On Thursday, the Wharf’s developer — PN Hoffman — at the site along Seventh and I streets SW — said it and local wildlife experts had successfully relocated the ospreys and three of their baby birds from the crane to Jug Bay Wetlands Sanctuary in southern Maryland. 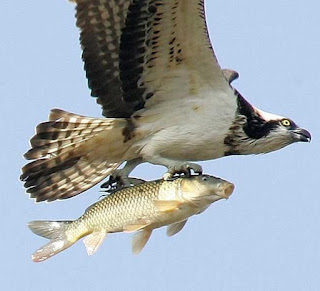 While Ospreys obviously originally used and other natural structures to nest in, around here, Ospreys almost always use man made structures, navigation aids, pilings, unused boats etc. I suspect that has allowed their population to expand above pre-colonial levels when they relied mostly on dead trees, and competed for them with the much more aggressive local Bald Eagles.


According to the Fish and Wildlife site, ospreys are protected under the Migratory Bird Treaty Act. But that Web page was last updated on April 20 of last year, and wildlife experts are concerned that, as with many environmental rules and laws, the Trump administration has changed the guidelines of the century-old mandate.

Some of the birds that are currently protected under the act include the bald eagle, snowy egret and great blue heron. The act was meant to protect migratory birds that were near extinction after they had been hunted or poached for their feathers.

But now the interpretations of the law and how it will be enforced are a bit up in the air after the Trump administration put out a legal opinion on the measure in December. 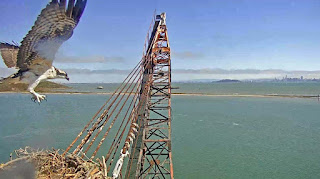 
Some experts said that how the longtime measure is being enforced and interpreted is “still a moving target.”

There has been guidance from the administration that the law would not be used as it has been in the past to hold people and companies accountable for hurting or killing animals, according to wildlife experts. Over decades, companies have covered oil pits, changed lights on communication towers from steady to blinking and undertaken other efforts in cooperation with the act. 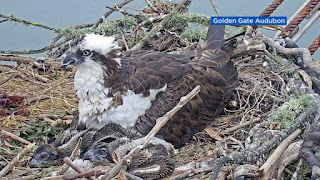 Wind turbines, however, have been granted fairly generous "incidental take" limits, since it's quite impractical to cover their giant spinning bird blenders.


In 2009, there was another situation in the Anacostia area involving ospreys and a nest, according to Rauch. A construction company left a crane up over the winter, and ospreys came, set up a nest and laid eggs. In that case, Rauch said, even though the construction company wanted to start work and use the crane, it had to leave the nest alone and wait.

Unfortunately, he said, the eggs didn’t survive due to a bad heat wave that season. 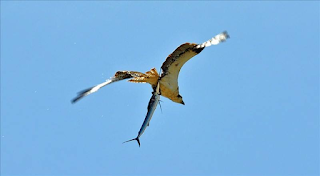 So they wasted some private companies time and money to no good.


According to wildlife officials, Belfast Valley Inc. was the firm operating the crane. Belfast Valley and other companies obtained all the necessary and proper approvals from the U.S. Fish and Wildlife Services to move the osprey from the nest.

The young birds, Rauch said, were about the size of a softball and pretty much slept through being moved from the nest to a softly lined basket and out to their new home.

Rauch said they “looked stress free and were getting well fed and looked great.” He said osprey are not aggressive animals and the mother osprey was not in the area when the chicks were taken.

While it is not ideal, he said, for the parents not to be around to raise the chicks, “we knew it was not going to be an option” in this case. He said there is better and safer wildlife habitat at the Jug Bay location than on the Patuxent River. He said one concern is that young chicks tend to be unstable and could easily fall out of the tall crane and onto concrete.

At Jug Bay, he said the chicks were placed in three, separate nests and were in “fine shape.” He said they were in nests where the parent osprey had lost a chick. It is typical for osprey to take over caring for other chicks, experts said.

Going to Jug Bay, he said, was the “best solution for the chicks, the adult osprey and the [company] as well.” Rauch said wildlife experts will continue to check on the osprey over the next few days to make sure they’re getting fed and cared for in their new home.

It's kind of cool that they used the chicks to fill spaces left in nests, but I wonder how effective that is. I doubt many Ospreys succeed in raising more than 2 chicks; that's a lot of fish to catch, and young birds are notorious for kicking their siblings out. I also wonder whether the adults will accept a move from Washington to Jug Bay. For a bird that migrates annually between North American and South America or the Caribbean, a move of about 15 miles isn't that big a deal. I wouldn't be shocked if they were back trying to rebuild the nest on the crane the next day.

I'm glad to see the Trump administration is allowing some rationality to creep into the policy. It's not like Ospreys are rare and endangered around here.