FBI agent Peter Strzok was escorted from the FBI building Friday as part of the ongoing internal proceedings at the bureau on his conduct, according to a source familiar with the matter.

As of Tuesday, the source said, Strzok is still an FBI employee. He had a central role on the FBI's investigation into Hillary Clinton's handling of classified information. He later worked on the investigation into connections between Trump campaign associates and Russia and briefly worked for special counsel Robert Mueller before text messages between Strzok and former FBI lawyer Lisa Page disparaging President Donald Trump were discovered. 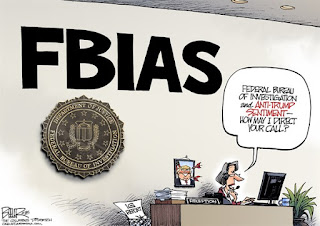 From across the pond at the Daily Mail,  FBI lover Peter Strzok is escorted OUT of the agency but still in a job after his 'Stop Trump' message was revealed. Paul Mirengoff at Powerline. Strzok Escorted from Building


The FBI reportedly escorted Peter Strzok out of its building today. Strzok remains an FBI employee, pending the outcome of a disciplinary review.

That’s as it should be. Strzok shouldn’t be fired without due process.

However, I’m not sure why it took so long to kick him out of the building. His email messages, on their face, should have been sufficient to have him placed him on administrative leave (or whatever leave he’s now on) even without the inspector general’s report.

Here’s an interesting and sometimes overlooked fact about Strzok: he’s not a liberal. In his emails, Strzok describes himself as a conservative Democrat. There is the suggestion that he supported John Kasich for president in 2016.

The forensic team went as far as contacting the Pentagon for help in extracting text messages that were missing from Strzok and Page’s FBI-issued cell phones. 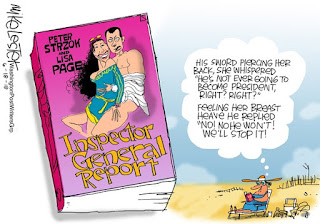 John Sexton at Hot Air about this:  How IG Horowitz Turned Up Strzok’s ‘We’ll Stop It’ Text


Who erased the message from the other database on the phone? It seems that, if not for this other database, the “we’ll stop it” text would never have been found, even with the use of military grade recovery software. How is that possible?

And here’s the question that follows from that one: If someone did go through a lot of effort to erase this particular text, does that show they had a consciousness of guilt about what it said? I mean, can it really be a coincidence that this particular text is the hardest one to find? I guess it’s possible but it seems suspicious. It makes me wonder if the only reason we have this particular damning text is that the FBI, or someone working there, really didn’t know about this other database. 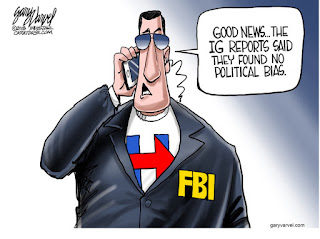 And Ace: How Did Peter Strzok's "We'll Stop It" Text Get Deleted or Go Missing from Archiving?


The official story we're getting is that this text wasn't originally archived because there was a period of several months when the automatic-archiving system wasn't capturing texts. But...

As Mollie Hemingway points out starting around 16:00 here, that December-May glitch where texts weren't being auto-archived does not include the August "We'll stop it" text -- so why was that text not turned over?

Via Wombat-socho's "In The Mailbox: 06.19.18" Tom Trinko at the American Thinker: The IG Report: They're Guilty, but It's Okay. Brendan Kirby at LifeZette: Horowitz Smashes Dems’ ‘No Anti-Trump Bias’ Talking Point Dept. of Justice inspector general disputes Democrats' repeated assertion that he found no partisanship in FBI Hillary probe. Streif at Red State: Horowitz: Over 300 Bribes To FBI Agents By Journalists; Two FBI Agents Who Hated Trump Still Work For Mueller; And More

Horowitz had another fun day in front of Congress yesterday, and his "exchange" with Trey Gowdy is priceless. Ann Alhouse: "Congressman Trey Gowdy... does a beautiful job of tying together the now-familiar FBI text exchanges with the issues of bias..."

Here's hoping Gowdy goes into the Special Counsel business in his next career. Allahpundit at Hot Air also catches Gowdy asking a good question: Gowdy: Why Didn’t Comey Try To Get A Special Counsel Appointed In The Hillary Probe Instead Of Deciding Everything Himself?


And Comey? He thinks Hillary is clueless: Comey: Hillary Clinton Still Doesn’t Understand Why She Was Under FBI Investigation "It shows me that even at this late date [Clinton] doesn't understand what the investigation in her case was about," Of course she does, everything in Hillary's world is about power.

More interminable training meetings: Ed Morrissey at Hot Air: FBI Director: We’re Going To Hold Everyone In The IG Report Accountable By, Er, Boring Them. Try firing a few more of them for breaking the rules. That'll focus their minds.

William McGurn at the WSJ (as reported at Hot Air) wants to Impeach Rod Rosenstein. Yeah, maybe. Allahpundit: Trump’s New Campaign Manager: It’s Time To Fire Sessions And End Russiagate, I don't know, I like Session about 60% of the time, hate him the rest. Politico: Call to suspend Mueller probe was just posturing, Giuliani says. However as a general thing, I think more firings among polticos is better than fewer.

Fox News: Manafort in 'solitary confinement' to avoid attack by someone intent on 'street cred,' Trump ex-lawyer says. But what about his children?


"Paul is in solitary confinement for his own safety from the general prison population," Dowd said. "The warden is concerned that someone would violently attack Paul just for street cred.

"They make all prisoners return to their cells whenever Paul needs to leave his cell," Dowd, who said he is a friend of Manafort's attorney, told Fox News.

Go see the video at the link. Betsy Woodruff at da Beast: Erik Prince: I ‘Cooperated’ With Mueller


During the campaign, Prince reportedly met at Trump Tower with Donald Trump Jr., operative George Nader, and social media specialist Joel Zamel to discuss a potential pro-Trump social media influence operation. He also met with Russian sovereign wealth fund manager Kirill Dmitriev during the transition period—a meeting reportedly planned to set up a backchannel between the Trump administration and Russia. Those revelations raise questions about his relationship to the Trump administration—questions Mueller is reportedly investigating.
. . .
You told the House intelligence committee that the Seychelles meeting [with Dmitriev] was unplanned, but ABC reported that George Nader briefed you on it beforehand. What do you make of that ABC reporting?

All I can say is, there’s been a lot of media reporting about me over the years and most of it is wrong. They get it wrong way more than they ever get it right.

The Gel-Mann amnesia effect. And a reminder of professionalism in reporters (and this mornings moment of levity) as a reporter finds out that the Caps coach is leaving in the middle of the Horowitz hearing:

When you find out that Barry Trotz resigned in the middle of a senate hearing @politiCOHEN_ pic.twitter.com/YLxUsIMktV
— Barstool News Network (@BarstoolNewsN) June 18, 2018

Wombat-socho has "Rule 5 Sunday: Girls In The Desert" and "FMJRA 2.0: Desert Plains" up and running.
Posted by Fritz at 8:13 AM