A reasonably sized collection this morning, no doubt thanks to the media emphasis on the border nonsense. Julie Kelly at American Greatness: What You Missed from Michael Horowitz’s Testimony

But one reason Horowitz might have punted in his recent report is because he knows the real bombshells are yet to come: He is investigating the FISA warrant on Trump campaign volunteer Carter Page; the cozy relationship between Justice and FBI officials and the media, including perks for scoops; ex-FBI Director James Comey’s handling of classified information; and the potential doctoring of official documents.

The most explosive revelations ahead could be how the FBI obtained FISA court authorization in October 2016 to spy on Carter Page for a year. The FBI’s application largely was based on the infamous Christopher Steele “dossier,” a compilation of political opposition research that was funded by the Democratic National Committee and the Clinton campaign. According to the House Intelligence Committee, “neither the initial application, nor any of the renewals, disclose or reference the role of the DNC, Clinton campaign, or any party/campaign in funding Steele’s efforts, even though the political origins of the Steele dossier were then known to senior DOJ and FBI officials.” The first application was renewed three times: Comey signed three applications, former Deputy Director Andrew McCabe (now under criminal investigation) signed one, and former Acting Attorney General Sally Yates and current Deputy Attorney General Rod Rosenstein also signed at least one.


According to the recently released inspector general report, on September 28 and 29, 2016 the New York office of the FBI immediately reported to the Washington headquarters its discovery of, first, 141,000 and then 350,000 emails on the laptop of Anthony Weiner — also known as “Carlos Danger,” a now-convicted sex offender. Mr. Weiner is the husband of Hillary Clinton’s inseparable aide Huma Abedin.

Now we know by October 4, the New York office had found 700,000 emails. The New York agents had seen and reported to FBI leadership they had seen email headers, all domain names, Mrs. Clinton’s initials on one sensitive but not classified document, and the missing BlackBerry backups.

The New York agents described it as the “entire file” of all Hillary Clinton emails from 2006 until 2016, including the BlackBerry messages that Comey himself had referred to as “the golden emails.”
. . .
Remember: Hillary Clinton’s attorneys produced approximately 30,000 of her emails, and they appear to have claimed that was the entirety of her work-related emails. Mrs. Clinton, staff and technical support had deliberately deleted approximately 33,000 emails that were just about “yoga” and “wedding plans.” They produced nothing from the beginning of her tenure as Secretary of State. Then, her server was wiped with “BleachBit.”

Yet, lo and behold, here so many emails were. Hundreds of thousands of emails, the “entire file” — everything Clinton — including data from the BlackBerrys and other devices for which the FBI and DOJ decided not to run search warrants because they “assumed” they had been destroyed.

So what did the FBI do with this “explosive” “bomb” including the “golden emails” on the BlackBerry that everyone knew was missing from the production?

Nothing — at least nothing to obtain evidence.
. . .
First, just do the math. There were 675,000 of them—at least 350,000 of which they knew from the video call of September 28. Clinton produced approximately 30,000 emails — claiming that included all her work-related emails. Supposedly, her staff culled 33,000 emails that were purely personal.

Combined, that is more than 600,000 emails short of this colossal find, which is ten times the total number of emails Clinton and company claimed existed.

THE CROOKED DEMOCRATS’ DEEP STROKE: Who Peter Strzok is and what he did. Sharyl Attkinsson at da Hill: What did Peter Strzok do?


Strzok isn’t just any rank-and-file guy spouting off in one ill-advised email. His fingerprints were on every FBI investigation that stood to impact Clinton’s presidential candidacy or to hurt Trump before and after the 2016 election.

He was chief of the FBI’s Counterespionage Section and number two in the FBI’s Counterintelligence Division. He led the team of investigators in the Clinton classified email probe and led the FBI investigation into alleged Russian interference in the election. He was involved in the controversial anti-Trump “Steele dossier” used, in part, to obtain multiple secret wiretaps. He was the one who interviewed Trump adviser Lt. Gen. Michael Flynn, who pled guilty to lying to the FBI only to later learn that agents reportedly didn’t think he’d lied. And Strzok was the “top” FBI agent appointed to work on the team of special counsel Robert Mueller to investigate alleged Trump-Russia collusion.

The earth-shattering finding on Strzok by the inspector general (IG) confirms a citizenry’s worst fears: A high-ranking government intel official allegedly conspired to affect the outcome of a U.S. presidential election.

It’s also directly relevant to the FBI investigations of Trump-Russia collusion, which the IG did not examine in this report. There are multiple allegations of FBI misbehavior in that inquiry, including conspiracies to frame Trump, and improper spying on Trump associates. Investigating those allegations takes on an added sense of urgency with news that the FBI’s top counterespionage official expressed willingness to use his official position against a political enemy.

Yet, for all of that, Strzok is still collecting a salary, courtesy of taxpayers, at the FBI Human Resources Department. And here’s the chilling part: If it weren’t for the IG's investigation, requested by Congress, he’d likely still be helping lead special counsel Mueller’s investigation of Trump today.

Nonmusical interlude, the Strzok/Page texts as read by actors:

Fox News: Rep. DeSantis: Strzok Is 'Walking Into a Buzzsaw' After Being Subpoenaed to Testify. Too bad it will be behind closed doors. I want to see Gowdy question him.


“If you get me one more glass of wine, I’ll tell you stuff only Bob Mueller and I know," Warner quipped to the crowd, according to Politico, referring to Mueller's probe into Russian meddling in the 2016 election and whether President Trump obstructed justice.

"If you think you’ve seen wild stuff so far, buckle up. It’s going to be a wild couple of months," Warner added.

But Justice is still holding back as much as they can, trying to run out the clock: Curious Releases – FBI Provides “Initial” Compulsory Documents To House Oversight Amid Ongoing Impeachment Threats… (CTH). Also at CTH,  The Deep State's inside man in Congress? Now It All Starts Making Sense – Deep State “Fixer”: Henry John Kerner, The Cover-Up Expert…. Will we see this name again?


Thanks to the efforts of Judicial Watch, we now find a name at the very heart of some of the most controversial investigative collapses in modern political history.

The same John McCain staffer who told the IRS to weaponize their database to target Tea Party groups, was intimately involved in Fast-and-Furious, Benghazi, IRS and now -under the Trump administration- “Spygate”. 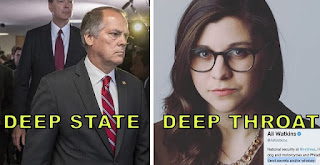 She would literally do almost anything or anyone for a story: ‘Pick-and-choose ethics’: NY Times says reporter Ali Watkins had ‘multiple’ relationships with sources she covered

And speaking of media whores, Stormy Daniels to meet with prosecutors in Michael Cohen investigation

Stormy Daniels is scheduled Monday to be interviewed by prosecutors in the Southern District of New York, preparing for a potential grand jury appearance about a $130,000 payment from President Donald Trump's attorney Michael Cohen in exchange for her silence about an alleged affair with Trump, according to a source familiar with the investigation.

Daniels and her attorney, Michael Avenatti, have been cooperating with prosecutors and provided documents about the payment, made shortly before the 2016 election, in response to a subpoena, said the source, who spoke on the condition of anonymity to provide the information about Monday's interview. 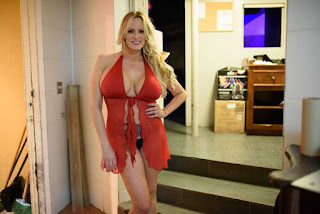 A spokesman for the U.S. attorney and attorneys for Cohen declined to comment.

Cohen is under federal investigation for possible campaign finance violations as well as bank and wire fraud. An FBI raid of his New York law office and home included a search for records related to the Daniels payment.

Cohen has acknowledged making the payment through one of his Delaware business entities.

Wombat-socho has "Late Night With Rule 5 Monday: Kaya Jones" and "FMJRA 2.0: Station To Station" ready for  your pleasure.
Posted by Fritz at 9:18 AM