Hours after the final two decisions of the Supreme Court were announced for the year, one of which was a 5-4 decision by the conservative majority against the right of public sector unions to force non-members to pay dues in which he joined, Justice Kennedy announced his retirement: 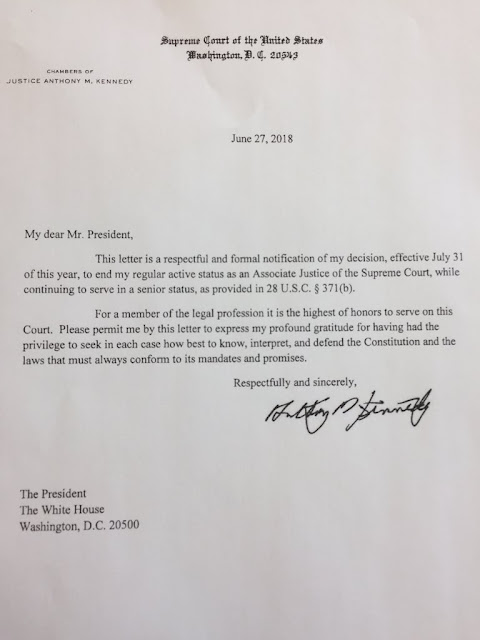 I have no great insights. If you want those, go elsewhere.

As a generally moderate conservative, Kennedy has long been the "swing" vote on contentious issues. This will, of course, open up a new round of Supreme Court wars, with the Republican base demanding the most conservative justice possible, and the Democrats scheming to block all but the most milquetoast. If it comes down to a Senate fight, the Republicans hold a 51-49 margin, that could easily be negated by some combination of John McCain's brain cancer, Jeff Flake's pique at Trump, or Rand Paul's general orneriness and pursuit of perfection.

I just want a justice who will interpret the Constitution as written, not as he or she wishes it was written. A few reactions from Twitter.

How it sounded inside a DNC committee meeting the moment Justice Kennedy’s retirement was announced pic.twitter.com/6S9uO2JGzQ
— David Siders (@davidsiders) June 27, 2018


Literally in tears. Haven’t felt this hopeless in a long time. With Justice Kennedy leaving, we now have two options as Americans: get fitted for your Nazi uniform or report directly to your death camp. How do you fight the darkness without light? My spark is going out. #SCOTUS
— Matthew Kovach (@mattiek17) June 27, 2018


Re: #kennedy retiring from the #SupremeCourt:
People are going to die. The replacement could solidify the court for 30+ years, ending civil rights (such as they exist now) in this country for generations. Fuck anyone who tells me or you to calm down today.
— Katie Klabusich (@Katie_Speak) June 27, 2018