"Spygate" continues: Willis Krumholz at the Federalist: 8 Times Obama’s Intelligence Agencies Set People Up To Fabricate The Russia Story These should sound familiar by now, but so much has gone by, an occasional reminder is useful. IBD editorial, SpyGate: Is Robert Mueller's Volcano Set To Blow? Breitbart: Confirmed liar James Clapper Denies Tipping Off Jake Tapper on ‘Pee Dossier’ Briefing. DrJohn at Flopping Aces: Clapper begins to put space between himself and Brennan and Comey. They may be seeking some from him as well. George Neumayr at the Federalist: The Spying That Dare Not Speak Its Name "Be sure to read the fine print in the media’s propaganda". Michael Walsh at American Greatness, As the Wiseguys Turn: McCabe, Comey, and the FBI Boys Power corrupts, and the FBI has always flirted with the line between law enforcement and gangsterism. Only continued oversight can keep them in line.

Paul Sperry, RealClearInvestigations, Pre-Dossier Carter Page: Russian Spy ... or FBI Honor Scout? The story of how he went from an FBI asset to a subject upon supporting Trump. It's a long one, but read the whole thing. Kelly Cohen, The Washington Examiner: Justice Department to offer additional FBI informant briefing to ‘Gang of Eight'. Laura Jarrett, CNN: Justice Department to show lawmakers classified materials on FBI source. Politico: FBI to share new details of Trump campaign informant with Congress, but Paul Ryan has already absolved them, sorta. The fact that Justice continues to stall suggests they continue to hold back inconvenient facts. But it's easy to understand why they dont' take Congress very seriously: Da Caller, House Democrats Asked The White House Counsel If Trump Could Shoot The FBI Director.  Taylor Millard at Hot Air:  Schumer: Founding Fathers Didn’t Want A King.  Ace: Adam Schiff Says He Loved the FBI. The FBI Definitely Didn't Love Him Back. Which gets back to the oversight question. No one like oversight, but the FBI definitely needs it.

Eric Felten reads through the Strzok-Page texts and finds them dripping with contempt, and worse, for Congress and its "laws" and "oversight authority."

The whole thing is worth your time. But here's a little of it.


They don't just disdain Congress, they despise it. Is their attitude common in the bureau? It's unlikely Page and Strzok were radical outliers. Both rose to senior positions of authority. Both were trusted with roles in the most sensitive and consequential investigations in recent times--the Hillary Clinton classified email case, the secret counterintelligence inquiry into team Trump, and Robert Mueller's special counsel investigation. Having been two of the most important players in the bureau, their approach to their work can be assumed to reflect the culture of the organization.


A July 2016 email from FBI agent Peter Strzok suggests bureau insiders discussed the conclusion of its investigation into 2016 Democratic presidential nominee Hillary Clinton’s use of a private email server as early as April 2016 — months before the FBI interviewed Clinton.

“Another Strzok email suggest[s] the decision on the Clinton email matter has been under discussion since April 2016 — three months before then-FBI Director James Comey announced he would recommend no prosecution,” the nonprofit government watchdog Judicial Watch revealed Thursday. 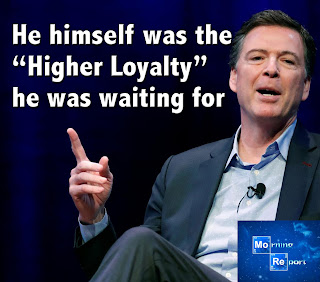 Why am I not surprised? Sen. Flake: Appointment of Special Counsel Mueller Is Not Unconstitutional

Aris Folley at the Hill claims Former US attorney says Manafort will likely go to prison Friday, but if so, I ain't seen it yet. CNBC: Special counsel Robert Mueller's team is requesting that witnesses turn in their personal phones to inspect their encrypted messaging programs. Just why do you think they are encrypted?


"It's just more typical for law enforcement to ask for consent for the obvious reason because it's much easier than applying to a court to get judicial permission," said Robert Ray, who acted as independent counsel during the Bill Clinton Whitewater investigation.

NYT: With Mueller Closing In, Manafort’s Allies Abandon Him, since it's pretty clear that Mueller has every intention of making Manafort's friends as uncomfortable as possible.

Breaking: Thomas Lifson at American Thinker Revealed: Senate Intelligence Committee under pending DOJ investigation over leaks, and Ex-Senate aide charged with lying about reporter contacts. This seems to be about the leaks of the Carter Page surveillence.


A former employee of the Senate intelligence committee has been arrested on charges of lying to the FBI about contacts with multiple reporters and was expected in federal court Friday in Baltimore.

James A. Wolfe, the longtime director of security for the committee — one of multiple congressional panels investigating potential ties between Russia and the Trump campaign — was indicted on three false statement counts Thursday evening after prosecutors say he misled agents about his relationships with reporters.

Though Wolfe is not charged with disclosing classified information, prosecutors say he was in regular contact with multiple journalists who covered the committee, including meeting them at restaurants, in bars, private residences and in a Senate office building. He is also accused of maintaining a yearslong personal relationship with one reporter, which prosecutors say he lied about until being confronted with a photograph of him and the journalist.


According to the indictment, Wolfe provided classified information to Watkins for a March 17, 2017 article at BuzzFeed about former Trump campaign adviser Carter Page.

The article revealed that Page was interviewed by the FBI as a witness in a 2013 investigation of a Russian spy ring operating in New York. Page’s identity was masked — he was identified as “Male-1” — in the court papers for the case. The government claimed that Russian agents met with Page, possibly as an attempt to cultivate him as a source.

Page was not accused of wrongdoing in that investigation and gave a voluntary interview with the FBI for the case. But Watkins’ report has widely been cited as evidence of Page’s close ties to Russia. Page is accused in the infamous Steele dossier of being the Trump campaign’s conduit to the Kremlin for purposes of collusion. He has vehemently denied the allegations.

Jonathon Lemire, Associated Press: Giuliani trying to influence perception of Mueller probe and we should be shocked why? Meanwhile Giuliani is under attack for questioning Stormy Daniels' virtue: Rudy Jabs Stormy Daniels: Your Career Means You Have No Credibility (Allahpundit at Hot Air):


As Twitchy told you earlier, blue checkmarks were falling over themselves to bust Sean Hannity for encouraging Robert Mueller’s witnesses to destroy their phones. Too bad the full context of Hannity’s remarks proved that Hannity was joking to make a point about Hillary Clinton destroying her phone. But to outlets like MSNBC and the Washington Post, that just doesn’t matter. And if it doesn’t matter to them, it sure as hell doesn’t matter to Media Matters. . .

Why can't those feckless c#nts take a joke?
Posted by Fritz at 12:25 PM