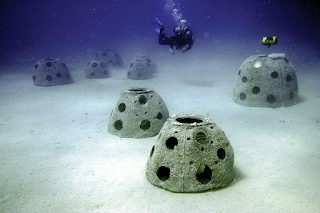 
The Coastal Conservation Association Maryland (CCA Maryland) added 170 concrete reef balls to a new artificial oyster reef off Tilghman Island over the past month, doubling the size of the reef. The statewide angler organization is building the reef as part of its efforts to improve the Bay for the benefit of the general public.

The Cambridge area will benefit from these and similar efforts. The two largest artificial reefs in the state made from concrete reef balls with oyster “spat” attached are at the mouth of the Choptank River. With the 170 balls added recently, the Tilghman Island site now has nearly 400 reef balls. A reef created several years ago off Cook’s Point has about 1,300 reef balls submerged on the bottom. 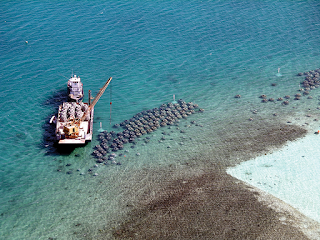 Oyster reefs are the building blocks of the Chesapeake ecosystem. Tiny marine life is attracted to the reefs, and in turn so are small fish, then larger fish such as rockfish, so named because they like to feed around oyster reefs.

For over a century, reefs have been knocked down by over harvest or assaulted by pollution and disease, and with them has gone the improved water quality and important bio-diversity that reefs provide.

The volunteers from CCA Maryland who helped deploy reef balls to the Tilghman site said the project will not only provide more opportunities for anglers; it will give a boost to the Bay’s ecosystem which already is showing signs of significant improvement.

Someday I'll rejoin CCA. I can only hold a grudge so long.