Last seen escaping Egypt by the skin of her teeth, and with the help of a little baksheesh after baring her lady parts in historical monuments (and having photos taken to document her disdain for history, activist model Marisa Papen visited Israel, with the intention to, well I don't know, raise consciousness or something, by taking her clothes off in similar places with very different official results: Belgian model raises ire with nude photo overlooking Western Wall: 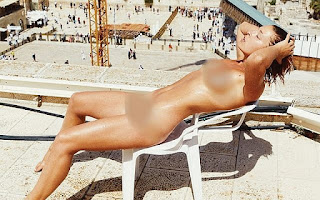 A Belgian model posed naked recently for a photograph overlooking the Western Wall in the Old City of Jerusalem, prompting outrage from the holy site’s rabbi and administrators. Marisa Papen posted the provocative photograph on her website Saturday, along with others taken by photographer Mathias Lambrecht, during a visit to Israel.

In the photograph, Papen leans back on a white plastic chair above a rooftop looking out over the Western Wall and adjoining plaza. 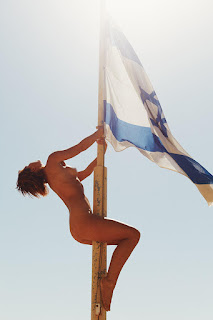 I wonder how much that hotel room cost!

“First of all, ‘don’t judge a book by its title’… This purely implies the shame you, dear reader, (perhaps) will project on me because I have done something so disrespectful, I should burn in hell,” Papen wrote in an NSFW blog post that included the Western Wall photo and others from her time in Israel. “I know my mailbox is about to fill up with threats and angriness [sic] again — to all the people typing down their furiosity [sic] right now, save your energy. I don’t even open them.”

“I knew that I wanted to push the boundaries of religion and politics even further,” she added, after referring to an incident in September 2017, when she spent a night in an Egyptian jail after posing naked for photographs at the Luxor archaeological site.

The angle of the photo excludes the Dome of the Rock and the Temple Mount, an area holy to both Jews and Muslims, and many of those who posted comments on her website suggested it was chosen for fear of a backlash from offended Muslims.“Breaking down the walls that have been build to keep all our wandering souls on this planet somehow under control,” she wrote. “With other words, showing my personal religion in a world where freedom is becoming a very luxurious thing.” 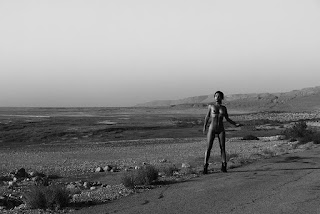 And Israel is a helluva lot freer than any of the states that border her.


But Papen rejected the idea that she and the photographer had purposely excluded the Muslim holy site in the final published shot. “The angle wasn’t deliberate,” she told The Times of Israel Wednesday, explaining that the pair had spent some time looking for a location from which both the Western Wall and the Temple Mount would be visible.

“It was just way better artistically,” she said of the image she and Lambrecht ended up publishing. 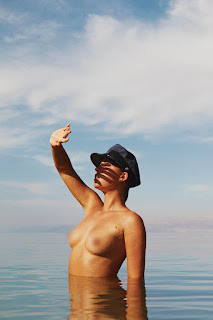 And besides, Islamists who would happily behead her for besmirching Allah's departure point would relish her demeaning Israeli sites.

There was no legal sanctions mentioned but:

Western Wall Rabbi Shmuel Rabinovich said, “This is an embarrassing incident, grave and lamentable, which offends the sanctity of the site and the feelings of those who visit the holy places.”

So, in Egypt, she was arrested and had to be bailed out by somewhat illicit methods. In Israel, she made a rabbi mad, but suffered no particular official sanctions.

May I suggest St. Leonard for your next photoshoot? I'm sure we can find someone to complain.