Investigation continues into a Thursday morning incident in which police reportedly fatally shot a large dog after it attacked a woman outside her Huntingtown home and then charged a state trooper.

The victim of the attack, identified as Jenna Rae Sutphin, 28, of Huntingtown, was transported from the scene to CalvertHealth Medical Center by ambulance and later transferred by air to Washington MedStar Hospital Center, where she was listed as undergoing medical treatment for injuries sustained in the incident, according to a Maryland State Police news release issued shortly after noon Thursday.

At about 7:15 a.m. June 21, a trooper from the Prince Frederick barrack, identified by Maryland State Police as Tfc. Shawn Matthews, responded to the unit block of Cherry Hill Road and Route 4 in Huntingtown after receiving an animal complaint from motorists passing by the area. Upon his arrival at the scene, Matthews found the dog, later identified as a Dogo Argentino, actively engaged in the attack in an overgrown area near the highway, adjacent to the front yard of the victim’s home, the release states.

As Matthews approached the scene, the dog aggressively began moving toward the trooper, according to police. In fear for his safety, the trooper fired his state police-issued .40 pistol, wounding the dog. Subsequently, the dog ran from the scene.  Matthews immediately began rendering aid to the victim until emergency medical services personnel arrived. Deputies from the Calvert County Sheriff’s Office also responded to assist.

The dog was located a short distance away from the scene. In an attempt to apprehend the dog and prevent it from doing further harm to anyone, police on scene fired again, fatally wounding the animal, the release states.
. . .
Police believe the dog was owned by the victim's fiance, MSP spokeswoman Elena Russo said Thursday, adding they did not yet know at that time how the dog ended up outside of the house and outside of the fenced-in area in the backyard. 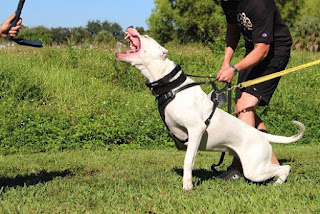 
The Dogo Argentino is a large, white, muscular dog that was developed in Argentina primarily for the purpose of big-game hunting, including wild boar; the breeder, Antonio Nores Martínez, also wanted a dog that would exhibit steadfast bravery and willingly protect its human companion. It was first bred in 1928, from the Cordoba Fighting Dog along with a wide array of other breeds including the Great Dane.

UPDATE: The victim, Jenna Rae Sutphin, has succumbed to the wounds from the attack.
Posted by Fritz at 5:42 PM