One of the activists who chased Homeland Security Kirstjen Nielsen out of a Mexican restaurant Tuesday night over the Trump administration’s immigration policies is an employee of the Department of Justice, The Daily Caller News Foundation has confirmed.

Members of the Washington, D.C., chapter of the Democratic Socialists of America crashed Nielsen’s meal with a demonstration full of chants and other outbursts.

One of those participants, Allison Hrabar, actually works for the Trump administration — as a paralegal in the DOJ.

“Kirstjen Nielsen, you’re a villain, locking up immigrant children,” activists can be heard saying in a video.

My guess is that if there was one young government parasite there, there was more than one. They tend to travel in packs like Candiru. Find out who they are and make sure they don't work in government again, at least while Republicans are in control of the executive branch. She'll probably get a gig substituting for Rachel Maddow. She's almost got the look down.


“If you see these people in public, you should remind them that they shouldn’t have peace,” she told The Examiner. “We aren’t the only ones who can do this. Anyone who sees Kirstjen Nielsen at dinner, anyone who sees anyone who works at DHS and ICE at dinner can confront them like this, and that’s what we hope this will inspire people to do.”

Despite Hrabar’s claims of keeping her personal politics outside of her time as an employee of the federal government, a look at her Twitter account, @allisongeroi, features tweets during the workday openly celebrating her behavior Tuesday night.


“Keeping families together in jail is not an acceptable solution,” Hrabar tweeted Wednesday afternoon at 1:56 PM.

Following the protest, Hrabar tweeted that, “No one who has ever made their living terrorizing immigrants deserves peace. If you see one in a restaurant, at a movie, or in your neighborhood, remind them of that.”

Hrabar has worked at the DOJ since July 2016. Prior to that, she was a student at the selective Swarthmore College where tuition runs over $50,000 annually. She previously attended a charter school in Arizona.

Remember, the next time a liberal calls for civility, it's evidence that they think they're on the losing side of the issue. Maintain pressure. If you see this girl in DC, be sure to harass her in public for Maduro's sins in Venezuela, Castro's in Cuba, and Che's all over.

It would even be amusing if it weren't so infuriating that the socialist, antifa children are being led to  do stupid things by the media beating the anti-anti-immigration drum, with no acknowledgement that the same situation with illegal immigrant children has occurred since at least the G.W. Bush era: Here Are Horrifying Photos Of Obama’s Illegal Alien Facilities The Media Refuses To Show You. 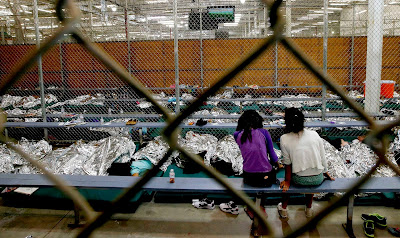