Let's start with another great essay by Andrew McCarthy: Clinton Emails: What the IG Report Refuses to Admit

In explaining themselves to the IG, Obama Justice Department and FBI officials contended that the make-or-break issue in the case was whether they could prove mens rea — criminal state of mind. In this instance, that involved former secretary of state Clinton’s knowledge and intent regarding the unauthorized transmission and retention of classified information. Investigators say it dawned on them at a very early stage that they could not. Hence, they urge, their decisions to allow the election calendar to impose a time limit on the investigation, to limit the amount of evidence they considered, to be less than aggressive in obtaining evidence, and to draft an exoneration of Clinton months before interviewing her (and other key witnesses), were entirely reasonable.

Yet their analysis left out the best intent evidence, namely, Clinton’s willful setting up of a private, non-secure server system for all official business.

You might be able to convince me that the Clintons did not set up the Clintonemail.com servers specifically to hide the fact that they were handling classified email unsafely (they didn't care about classified data one way or the other), but you'll never convince me they didn't set it up to hide something, and that something was probably illegal or at least unsavory. From Wombat-socho's "In The Mailbox: 06.20.18"  Rich Logis at the American Thinker brings us IG Report Confirms: Our Republic Is under Existential Threat and The Geller Report: IG Report Questions Why FBI Didn’t Investigate Huma’s E-Mails During Hillary Probe. Lloyd Billingsley at  Front Page confronts 'Textbook Definition of Bias'. Amber Athey, Da Caller: Trump Napalms Strzok And Page For Biased Texts. But Peter Stezok's lawyer Aitan Goelman claims Donald Trump is wrong. My client Peter Strzok is a patriot, not a 'sick loser.' at USAToday. Bret Baier: For Those Who Say the IG Report Is ‘a Nothing Burger,’ They Didn’t Read It at Grabien News. 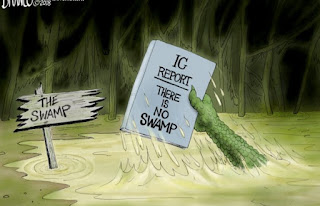 What are the chances? Three of the five FBI employees dinged for anti-Trump bias in IG report ended up on Mueller probe. It's almost like it was a prerequisite or something. But Horowitz hid #3 (Kevin Clinesmith) from the Congress until outed by Mark Meadows (D-NC). Hmmm. But that wasn't Mark Meadows only revelation. He strongly accused the FBI of altering their "302s", the written (not recorded) records of witness interviews after the fact to favor a charging decision desired further up the food chain. Da Caller: Mark Meadows Drops Multiple BOMBSHELLS In Hearing About Clinton, Russia Probes

"Horowitz appeared to acknowledge that he is aware of allegations about edited 302s."

“If I could just mention, we have been getting those kind of referrals and as often happens when we issue reports like this we get other information coming to us, and we are intending to follow up on that,” Horowitz said.

"There is growing evidence that the 302s were edited and changed...it is suggested that they were changed to either prosecute or not prosecute individuals." -Meadows. This is bad news. Note the names of the two Attorneys. pic.twitter.com/fBw3qgRc7a
— Nick Short 🇺🇸 (@PoliticalShort) June 19, 2018 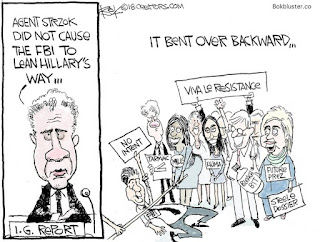 Byron York at Da Spectator: The fall of James Brien Comey "Under investigation and with his own reputation in question, the former FBI director is no longer the reliable, trustworthy source he once seemed." About right. But  If I'd kept quiet I would have been criticized: Comey on DOJ inspector general's report" Comey whines. That's true, can't make everybody happy, so doen't even try.  J.D. Tuccille  for Reason: After the IG Report, Let’s Kill the FBI While We Can "It’s time for this intrusive, politicized, and overly powerful agency to be dumped." I think about 1 career length is the proper duration for an agencies existence. After that they get hopelessly corrupted by politics and careerism. Brendan Kirby, LifeZette:  Democrats at IG Testimony Seem to Be at Wrong Hearing, Minority leaders of committees examining Clinton email probe interrupt to complain about President Donald Trump's immigration policies 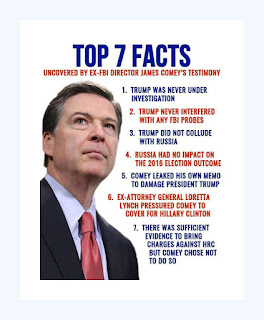 Kelly Cohen  & Daniel Chaitin at the Washington Examiner: DOJ turns over docs to House Intelligence following explicit threats by Republicans but it's 1.2 Million documents, so it will take a while. Meanwhile Judicial Watch Demands Emails to and from Mueller’s ‘Pit Bull,’ Nonprofit government watchdog wants federal judge to order Justice Dept. to produce Andrew Weissmann's communications. Judicial has a better record of getting documents than Congress. Jeff Mordock, the Washington Times: Rudy Giluiani says FBI questioned him in leak investigation:


Rudy Giuliani disclosed Tuesday that FBI agents questioned him over his October 2016 comment that “surprises” would help President Trump win the election.

The revelation, appearing in an interview with The Huffington Post, appears to confirm that the Justice Department is investigating leaks from the FBI’s New York office about its probe of Hillary Clinton’s use of a private email server while Secretary of State.

In the Michael Cohen comedies, Michael Cohen Reportedly Wants Trump To Pay His Legal Fees (HuffPo becasue WSJ is paywalled), which seems fair to me. Although, if he's really innocent, he should sue Mueller. It's happened before. But if that won't work, Trump's personal attorney is 'willing to give info' about the President according to CNN. So much for attorney client privilege. Musical interlude (with special appearance by Donna Jean)!

Allahpundit ties it all together: Wow: Michael Cohen Resigns From RNC — Partly In Protest Of Trump’s Child Separation Policy


I did not see this plot twist coming. Kudos to the writers of our current virtual reality for bringing two key narrative threads together, the child-separation drama and the “Will Michael Cohen flip on Trump?” drama.

In case you didn’t know, Cohen is a deputy finance chair of the RNC. Or rather, was:


In his resignation letter to Ronna McDaniel, the RNC chair, Cohen cited the ongoing special counsel investigation as one reason for his departure. ABC News has reviewed the email…
Cohen also criticized the administration’s policy of separating migrant children from their parents at the southern border, the first time he’s distanced himself from the president.
“As the son of a Polish holocaust survivor, the images and sounds of this family separation policy is heart wrenching,” Cohen wrote. “While I strongly support measures that will secure our porous borders, children should never be used as bargaining chips.”

Why, oh why, would Cohen deliver that rhetorical knee to Trump’s groin when he didn’t need to? He could have limited his reasons for resigning to the DOJ investigation. Taking a shot at POTUS on, of all things, immigration feels gratuitous.

But is it? Headline from today’s Wall Street Journal: “Michael Cohen Wants Trump to Pay His Legal Fees.”

Mediaite: CHYRON MALFUNCTION: ABC Apologizes For Graphic Declaring Manafort Pleaded Guilty to Manslaughter. As Instapundit notes . . . these “mistakes” sure seem to lean in one direction.


I'll come back to the latest FAKE crisis & news (children of illegal immigrants being separated from their parents) at the end of this, but let's take a tour of some REAL skidmarks left by the MSM and their comrades in The Democrat (C) party first:

- Recall how much media time was dedicated to the theory (and how much money and time was wasted on the investigation of a unicorn fart) that Trump colluded with Russia to steal the election from Hillary "It Was MY Turn" Clinton? Eighteen-plus months downstream, there is still no evidence or proof...only a nasty skidmark on America.

- For comic relief, the gun-grabbing Lefturds placed David Hogg front and center. He left a tiny skidmark, but seems to have gone away.

- How about the false 'dossier' about peeing Russian hookers, paid for by the Clinton campaign, and aided by Comey and his FBI cronies? That's a 'shart' skidmark deservedly being ignored now.

All of this hype, sturm and drang has served to distract attention away from (and suck available media time away from) minor things like Wiener's laptop, the Pakistani computer crooks that handled Democrat computers in Congress and sent secrets to Pakistan, the whitewash of the Clinton Foundation pay-for-play and Hillary's illegal bathroom private e-mail system and grossly negligent mishandling of highly classified government intelligence. All incredibly smelly skidmarks upon the Republic.

- It's a bonus that the DOJ-FBI election-tampering and whitewash/coverup of their profound Hillary love isn't discussed at all. Oh, did I forget to mention their stonewalling Congressional oversight? By now, the massive skidmarks are wider and longer than the interstate system. . .

Jack Shagger Shafer at Politico asks: Is It OK to Sleep With Your Sources? Is she hot? To be generous Ali Watkins was a  5.


. . . a generation ago a leading journalist by the name of Laura Foreman made such a case. While reporting for the Philadelphia Inquirer, Foreman fell in love with and had a long-term affair with a Henry J. “Buddy” Cianfrani, a powerful Pennsylvania state senator who later went to prison on racketeering charges. She remained on the politics beat and wrote repeatedly about him for the Inquirer. She also accepted gifts worth $43,000 in today’s money, including a mink coat and a Morgan sports car. In 1977, she moved on to the New York Times, where she reported on politics for the paper’s Washington bureau. When the Times’ top editor, A.M. Rosenthal, learned of the Philly relationship, he demanded her resignation. “It’s OK to fuck the elephants — just don’t cover the circus,” Rosenthal said. Foreman and Cianfrani married in 1980 after he completed 27 months in prison on charges unrelated to Foreman. The couple were still married when he died in 2002.