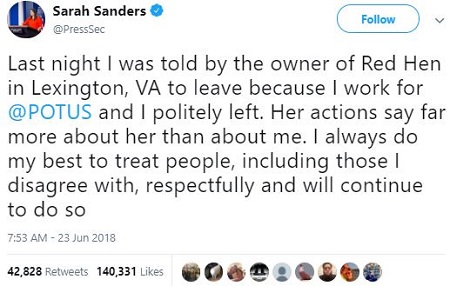 Ms. Wilkinson is a Democrat who hates Republicans so much that she does not want to serve any Republican customers. Could I offer an intelligent discussion of the Trump administration policies that Ms. Wilkinson criticized? Yes, but you cannot argue with hate. No amount of facts or logic can persuade someone like Ms. Wilkinson, whose beliefs are based in an irrational prejudice. She hates all Republicans, and there is no point wasting your time by arguing with partisan fanatics.

A basic principle of courtesy is that one should never go where one is unwelcome. This is why, for example, I have never participated in any kind of “counter-protest,” although I’ve covered quite a few during my journalism career. When the Revolutionary Communist Party held a protest at the 2016 Republican National Convention in Cleveland, I was there with my camera and notebook, but I certainly did not argue with that ranting mob of anti-American extremists.

Sometimes, courtesy is just smart business. If I had told those Commies what I really thought of them (i.e., “the only good Communist,” etc.), this might have interfered with my ability to get the story, and perhaps endangered my personal safety. So I just kept my mouth shut and did the job I was there to do. And this has been my practice at all manner of events. Covering Hillary Clinton on the campaign trail in 2008, for example, I was unctuously polite to her staff, and even met Chelsea Clinton, who struck me as very nice young lady.


THE LEFT IS NOT ENJOYING LIVING UNDER THE RULES THEY CREATED: Yelp Users Slam Virginia’s Red Hen Restaurant After It Refused Service to Sarah Huckabee Sanders and Her Family.

Indiana’s Memories Pizza could not be reached for comment — because they’re now out of business.

I've never been to Lexington, IIRC, but if I did, I would not eat at the Red Hen there, because they don't want me.

I wonder if they apply that to employment too?