The topless issue that created a firestorm for Ocean City officials this summer is heading to court after a lawsuit filed Tuesday challenges the town's emergency ordinance prohibiting women on the beach from going topless.


Along with Eline, the plaintiffs include Rose MacGregor, of Salisbury; Megan Bryant, of Anne Arundel; Christine Coleman, of Long Island, New York; and Angela Urban, of Pittsburgh.

The lawsuit seeks a ruling that the ordinance violates an equal protection clause of the 14th Amendment of the Constitution and the Declaration of Rights to the Maryland Constitution.


"This lawsuit is about confirming the legal right of women to be bare-chested, in public, in the same places that men are permitted to be bare-chested, for purposes other than breastfeeding," the lawsuit reads.
It claims that gender classification does not further government interest, but increases the idea that women are
viewed as "inherently sexual objects." 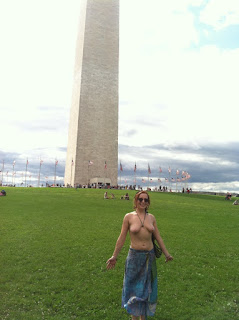 She is also working in Washington D.C. to the same end.

The lawsuit lists several examples of precedence for the plaintiffs' claims. In the most recent example, a federal district judge in Fort Collins, Colorado, ruled against enforcement of ordinances attempting to make female toplessness illegal.

Filed under lawsuits I hope will succeed.

Wombat-socho has "Rule 5 Sunday: Girls In The Desert" up and running.

Bare-Chested at Brighton Beach, Summer 2015 from Chelsea Covington on Vimeo.
Posted by Fritz at 6:00 AM