Reason #5943 That Trump Was Elected

The White House has announced plans to find a way to protect the Earth from dangerous Asteroids.


This Is NASA’s New Plan to Detect and Destroy Asteroids Before They Hit Earth
By Hanneke Weitering, Space.com Staff Writer | June 20, 2018 06:30pm ET
NASA has updated its plans to deflect potentially hazardous Earth-bound asteroids — and none of them involve Bruce Willis.
The White House Office of Science and Technology Policy released a new report today (June 20) titled the “National Near-Earth Object Preparedness Strategy and Action Plan.” The 18-page document outlines the steps that NASA and the Federal Emergency Management Agency (FEMA) will take over the next 10 years to both prevent dangerous asteroids from striking Earth and prepare the country for the potential consequences of such an event. 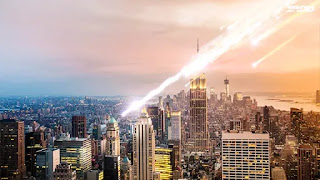 Officials with NASA, FEMA and the White House discussed the new asteroid-mitigation strategies in a teleconference with the media today. “An asteroid impact is one of the possible scenarios that we must be prepared for,” Leviticus Lewis, chief of FEMA’s National Response Coordination Branch, told reporters during the teleconference, adding that a catastrophic asteroid strike is “a low-probability but high-consequence event” for which “some degree of preparedness is necessary.” [Related: How Trump’s Space Force Would Help Protect Earth from Future Asteroid Threats]
“This plan is an outline not only to enhance the hunt for hazardous asteroids, but also to better predict their chances of being an impact threat well into the future and the potential effects that it could have on Earth,” NASA’s planetary defense officer, Lindley Johnson, said during the teleconference. Johnson added that the plan will help NASA “step up our efforts to demonstrate possible asteroid deflection and other mitigation techniques, and to better formalize across the U.S. government the processes and protocols for dissemination of the best information available so that timely decisions can be made.” …

I read somewhere that a living persons chances of dying from an asteroid strike is greater than their chance of dying in a plane crash. It's not so much that the chance of the earth being hit by a large asteroid is so high, it's just that the potential number of casualties is effectively only limited by the number of people alive, where as the  number of people killed in a plane crash has a fairly low upper limit as catastrophes go, a few hundred at most.

Here ya go:  What Are the Odds a Meteorite Could Kill You?


Putting a probability number on the chances of being hit by a space rock is difficult, since the events are so rare. Still, Tulane University earth sciences professor Stephen A. Nelson published a paper in 2014 that made the effort. He put the lifetime odds of dying from a local meteorite, asteroid, or comet impact at 1 in 1,600,000.

Nelson put the risk of dying from a large, global asteroid or comet impact at 1 in 75,000. If that seems surprisingly high, it's because when massive objects have hit the Earth in the geologic past, they have wiped out millions of organisms, even whole species. Most of the creatures aren't killed from the direct impact, but from the aftereffects, which include heat, radiation, and dust that clouds out the sun.

So yeah, maybe it's time to get serious about protecting civilization from asteroid strikes. And, who knows, maybe eventually we can pay for the system with minerals extracted from the asteroids.

Linked at Pirate's Cove in the "Sorta Blogless Sunday Pinup" and links.
Posted by Fritz at 5:06 PM