It's always in the last place you look, right?

"It's completely a coincidence we have two identical drafts at three different dates; not at all because we re-edited original version. Also, a coincidence we didn't record it, asked for no lawyer to be present, lost original handwritten notes & hide one of the agents involved." pic.twitter.com/0sAL2Nh9Ct
— Robert Barnes (@Barnes_Law) December 18, 2018


It's pretty clear there was a lot of post interview word-smithing going on. This one has a link to all the copies:

At long last, read the Michael Flynn 302. Together with all we know, seems pretty clear there was a fundamentally different assessment of Flynn case pre-Mueller and post-Mueller. https://t.co/LJsfivptFM
— Byron York (@ByronYork) December 18, 2018


WILL JUDGE SULLIVAN ACCEPT BEING GIVEN THE IDIOT’S TREATMENT?

Mueller replied, but as Powerline’s Scott Johnson points out today, “the attachments to the reply memorandum include neither. Where are they?” Either Director Christopher Wray is in control of the bureau or he’s not. At this point, the latter seems to be most likely. And a vacating of Flynn’s conviction warranted.

Da Spectator: The FBI’s Whacking of Michael Flynn - How the FBI set up an American patriot for the kill. Likens the FBI op to a mafia hit. "Uncle Al and La Cosa Nostra couldn’t have set it up better. This was right out of their playbook. The FBI went to Flynn as friends and then — BAM! — they figuratively blew his brains out."  PJ Media, With FBI Misconduct Against Flynn Revealed, Mueller ‘Obstruction’ Probe Evaporates. From the Wombat's In The Mailbox: 12.17.18, Powerline has  A No-Nonsense Judge Looks At The Flynn Prosecution.


Team Mueller has told Judge Sullivan that Flynn should serve no jail time. Does this move stem from the goodness of Mueller’s heart? Or is it an attempt to move on and avoid the wrath of this no-nonsense judge? I suspect it’s the latter.

Another possibility is that he accepts the plea and blasts the prosecutors. But doing so probably won’t slow Mueller down. He’ll take whatever dressing down comes his way and move on.

What if Judge Sullivan borrows from his Ted Stevens playbook and names a special prosecutor to investigate the conduct relating to the Flynn prosecution? That’s an intriguing possibility, but probably a remote one. It seems unlikely that irregularities regarding Flynn’s case rise to the level of the ones that Sullivan found so problematic in the Stevens case. 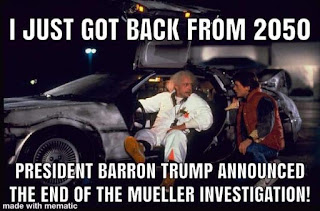 Will The Mueller Switch Project Collapse? We can only hope. The Dersh pisses off AllahPundit by pointing out It’s Not Always A Crime To Lie To The FBI


This is true, but his reasoning as applied to Flynn is so dubious that it’s become chum for a feeding frenzy among lawyers on Twitter today. Dershowitz’s point is straightforward: It’s only a crime to lie to a federal agent if you lie about a material fact. If the sky is blue and you tell the FBI it’s red, there’s no jail time for that because that fact isn’t material to whatever it is they’re investigating.

But the question of which facts are “material” isn’t always clear cut. How to define them? Well, says Dershowitz, here’s one way: If the feds already know the fact before you mention it, then it can’t be material. Your lie hasn’t misled them. They won’t waste any time or money investigating it. They already know the truth. No harm, no foul, no prison. In fact, if the feds are asking you a question about a fact they already know, presumably they’re only doing it in hopes that you’ll perjure yourself, right? That’s the Flynn situation, Dershowitz argues today in an op-ed.


You need a Venn diagram to follow this one. Flynn knew, and acknowledged to the Strzok/Pietnka interview team that he knew they had transcripts of his calls.

Hypothesis confirmed, (Breitbart) FBI Email: James Comey Briefing Was ‘Trigger’ for CNN to Break Dossier Story CNN in league with Comey's FBI to "get" the President. AllhPundit, Annoyed Comey: When Will These Republicans Find Their Spines And Stand Up To Trump And Fox News? but accepts no responsibility. PJ Media Live Blog,


"This from the punk who boasted that he tricked Lt. Gen. Mike Flynn in a perjury trap and threatened to prosecute him on a Logan Act violation. Sheesh."

Republicans should stand up to Comey and his tremendous corruption - from the fake Hillary Clinton investigation, to lying and leaking, to FISA abuse, and a list too long to name. The President did the country a service by firing him and exposing him for the shameless fraud he is
— Sarah Sanders (@PressSec) December 18, 2018


You Don't Say? WaPo Reporter: FBI And CIA Sources Say They Doubt Major Dossier Allegation. But it was a convenient excuse to do what they wanted. Clarice Feldman at the American Thinker: Washington’s Growing Product Line: Confected Felonies. Wired, A Complete Guide to All 17 (Known) Trump and Russia Investigations and they're proud of it.

Giuliani indicates conversations with Trump on Trump Tower Moscow occurred later than previously known. Are conversations a crime? ED Morrissey at HotAir, Giuliani: Mueller Will Only Get A Trump Interview “Over My Dead Body”. After the Flynn treatment, who would?

Why Michael Cohen Is Particularly Detestable and Despicable. I don't need convincing. Why Did Michael Cohen Plead Guilty to Campaign Finance Crimes That Aren't Campaign Finance Crimes? They gave him a one time offer, give them the President, and they'd let him off light on his tax cheating. Trump: Cohen Only Became a ‘Rat’ After FBI Did Something ‘Absolutely Unthinkable’. True. Let's raid Comey's attorney's office for his leaked memo, and see the response. Kurt Schlicter at TownHall: Pardon Everyone (Except That Rat Cohen) I'm OK with that, but maybe Manafort too; I'm still thinking.

Andrew Napolitano: Let’s Face It, There’s “Ample Evidence” To Indict Trump In The McDougal Payoff. If you ignore the fact that the payoff was not a crime.

Via an Althouse commenter: What If G-Men Went After the Washington Post as They’re Going After the Enquirer?


Imagine that a federal prosecutor had gone after The Washington Post Company back in the 1990s on the theory that the reluctance of its magazine, Newsweek, to publish an article about a sex scandal involving Bill Clinton constituted an illegal campaign contribution to the Clinton campaign.

The ensuing outcry and fear that prosecutors would begin substituting their own news judgment for that of editors wouldn’t have been limited to First Amendment absolutists like Nat Hentoff. It would almost certainly have been widely shared. And justifiably so . . .

Yep, sauce for the goose and all.


Duck Duck Go suggests emails pretty near the top of the list.

Google doesn't mention them at all.

I tried it. It's true. But there is no effort by the tech companies to control our thoughts, right.
Posted by Fritz at 9:30 AM