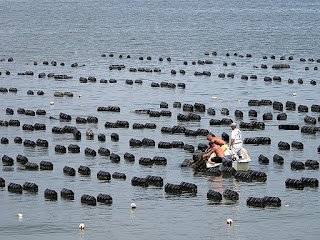 I have my doubts, but here it is, from VIMS: Oyster aquaculture limits disease in wild oyster populations

“We were interested in testing widely held assumptions about how diseases might impact shellfish aquaculture,” says Carnegie, “specifically the idea that large numbers of farmed animals would produce higher levels of disease that could spread to nearby wild or fishery resources. Our hunch was that oyster aquaculture could serve as a ‘sink,’ rather than a ‘source,’ for pathogens that primarily spread when oysters die, because the point of aquaculture is to remove oysters from the system before that happens.”

By showing that this hunch is correct, Carnegie says the research “highlights an important ecological benefit that intensive shellfish aquaculture may provide.” He adds, “This should help bolster the well-justified perception of shellfish aquaculture as a green industry worthy of public support, which this industry must have if it is to grow.”

Carnegie says “Our study was based on mathematical modeling that drew on field data that has been collected very widely—from the Gulf of Mexico through the Atlantic. The models were basically available on the shelf by virtue of having been developed over the years; we were able to take advantage of them to ask some specific questions about disease dynamics.”

Diseases are among the primary limiting factors in wild oyster populations. In the Chesapeake Bay and Delaware Bay, wild oysters are managed with the understanding that most will die from disease, while there are few wild populations of oysters in New England because of Dermo and other diseases.

Dermo is caused by a single-celled parasite that occurs naturally in the environment and proliferates in the tissue of host oysters, which spread the parasite to other oysters when they die and their parasite-infected tissues decay. But it takes two to three years for the parasite to kill the oysters. As long as the oysters are held on farms long enough to filter disease-causing parasites from the water, but not so long that parasites develop and proliferate and spread to wild oysters nearby, aquaculture operations can reduce disease in wild populations.

The disease does not cause illness in humans.

“As long as aquaculture farmers harvest their product before the disease peaks, then they have a positive effect on wild populations,” says Ben-Horin. “But if they’re left in the water too long, the positive effect turns negative.”

The researchers note that several factors can confound the positive effect of oyster aquaculture. Oyster farms that grow their product on the bottom instead of in raised cages or bags, for instance, are unlikely to recover all of their oysters, resulting in some oysters remaining on the bottom longer. This would increase rather than reduce the spread of the disease.

The "study" is basically a mathematical model. Put in some assumptions about how the diseases spread from oyster to oyster, and some data about how oysters are harvested, grind the numbers and out comes some results. They might be right, but they might not be. That's nice, but it's not finished until you find a way to test it in the field.

As a great man once said, "All models are wrong, but some are useful."
Posted by Fritz at 7:07 PM