Russiagate: Our Man Flynn Off the Hook


Mueller in a sentencing memo said Flynn's "substantial assistance" to his probe warrants a light criminal sentence — which could include no jail time for the retired Army lieutentant general.

That assistance, which includes 19 interviews with Mueller's team and Justice Department attorneys, related to a previsouly unknown "criminal investigation," as well as to Mueller's long-running probe of the Trump campaign's and transition team's links or coordination with the Russian government.

"The defendant provided firsthand information about the content and context of interactions between the transition team and Russian government officials," the memo says.

Mueller's memo almost completely blacks out details of what Flynn might have said.
. . .
"Given the defendant's substantial assistance and other considerations set forth below, a sentence at the low end of the guideline range — including a sentence that does not impose a term of incarceration — is appropriate and warranted," Mueller's office wrote in the memo filed Tuesday.

Mueller's memo says that some of Flynn's benefits to the probe "may not be fully realized at this time because the investigations in which he has provided assistance are ongoing."

Mueller said in the filing that while Flynn's long military and public service records "distinguish him from every other person who has been charged" in the Russia probe, that same record "should have made him particularly aware of the harm caused by providing false information to the government."


What the sentencing recommendation did not address was the sketchy beginnings of the Flynn investigation. It started with the Obama administration's unhappiness that Flynn, during the transition as the incoming national security adviser, had phone conversations with Russia's then-ambassador to the U.S., Sergey Kislyak. Because Kislyak was under American surveillance, U.S. intelligence and law enforcement agencies had recordings and transcripts of the calls, in which Flynn and Kislyak discussed the sanctions Obama had just imposed on Russia in retaliation for its 2016 election interference.

There was nothing wrong with an incoming national security adviser talking to a foreign ambassador during a transition. There was nothing wrong with discussing the sanctions. But some officials in the Obama Justice Department decided that Flynn might have violated the Logan Act, a 218 year-old law under which no one has ever been prosecuted, that prohibits private citizens from acting on behalf of the United States in disputes with foreign governments.

The Obama officials also said they were concerned by reports that Flynn, in a conversation with Vice President Mike Pence, had denied discussing sanctions. This, the officials felt, might somehow expose Flynn to Russian blackmail. So Obama appointees atop the Justice Department sent FBI agents to the White House to interview Flynn, who was ultimately charged with lying in that interview.

The FBI did not originally think Flynn lied. In March, 2017, then-FBI Director James Comey told the House Intelligence Committee that the two FBI agents who questioned Flynn "did not detect any deception" during the interview and "saw nothing that indicated to them that [Flynn] knew he lying to them," according to the committee's report on the investigation into the Trump-Russia affair. Comey said essentially the same thing to the Senate Judiciary Committee and, in the words of Chairman Chuck Grassley, "led us to believe ... that the Justice Department was unlikely to prosecute [Flynn] for false statements made in the interview." FBI number two Andrew McCabe told the House the same thing. "The two people who interviewed [Flynn] didn't think he was lying, [which] was not [a] great beginning of a false statement case," McCabe told the Intelligence Committee.

Only later, after Comey was fired and Mueller began his investigation, was Flynn accused of lying. He ultimately pleaded guilty

So basically, Trump was right to ask Comey to go easy on Flynn in the first place. The Last Tradition: Don't believe the spin, Swamp Creature Mueller recommends no jail for Flynn because he never had a case in the first place I believe he had a case, just not one that a reasonable prosecutor would prosecute...

The 78-page complaint alleges that Mr. Corsi “has been criminally threatened and coerced to tell a lie and call it the truth.”

Peter Carr, a spokesman for the special counsel’s office, declined to comment.
. . .
“Dr. Corsi has been threatened with immediate indictment by Mueller’s prosecutorial staff unless he testifies falsely against Roger Stone and/or President Donald Trump and his presidential campaign, among other false testimony,” wrote Mr. Corsi’s attorney Larry Klayman.


Mueller's Perjury Traps, by William L. Gensert At the American Thinker. It does seem like his main weapon.


Given $30 million, two years, and 17 hungry prosecutors empowered to find anything a target might have ever done in his life and it is likely they will find something. Flynn would have probably prevailed in court, but Mueller also specializes in “ruination.” He is said to have threatened to also charge Flynn’s son and wife.

Mueller has an unlimited budget ($40 million spent so far); Flynn had only his savings. The same holds true for Papadopoulos and Corsi.

This is how Mueller has pursued his vocation, railroading people into prison for minor offenses, and his own career advancement. Apparently destroying people’s lives by charging them with process crimes when he can’t charge them with real crimes is what earns respect in D.C. – because don’t forget that when the now irrelevant Rod Rosenstein appointed Mueller (coincidentally, newly fired FBI Director James Comey’s best bud), all we heard was how respected he was and how he had “unblemished integrity.”

It's long but worth it. From Adam Mill at the Federalist 10 Reasons It’s Time To Fire Rod Rosenstein. All good ones, but I like #5 the best. A History Of Politically Selective Prosecution


Rosenstein has ignored serious violations of the law by Trump’s opponents while aggressively pursuing Trump’s allies. More disturbing, Rosenstein tolerates the political violence of Antifa and its numerous instances of viciously attacking political opponents. The DOJ would prosecute the attacks as civil rights violations if the victims were leftists.

As noted below, there are some questions about the accuracy of Rosenstein’s testimony before Congress, also. Only one inescapable common denominator distinguishes the prosecuted from the not-prosecuted regarding lying to Congress: If the perjuring witness wears an anti-Trump T-shirt, it works as a de facto immunity from prosecution.

NBC Wonders: Will SCOTUS Change Precedent On Double Jeopardy In Time To Help Manafort? It would be one reason to do so. The second reason is because it would be the right thing to do. 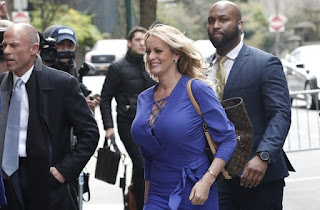 Daniels described the reason she decided to come forward and tell her story publicly.
“The next thing I know, Michael Cohen is shopping a book saying in the thing that he was trying to pitch, ‘Oh, and I’ll tell you about the rumor where I paid her $130,000.’ I’m like, great, so now not only do I look like a whore, I look like a cheap whore. Like, no,” she said. “And I just wanted to be able to defend myself because they broke the agreement five times before I said anything.” 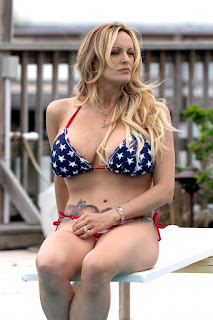 I may not be the market demographic, but $130,00 for a few minutes of effort doesn't strike me as cheap. You know what Errol Flynn said: You don't pay them for sex, you pay them to go away when your done.


Daniels recently released a critical statement about her attorney, Michael Avenatti, accusing him of pursuing the defamation case against Trump without her approval and not informing her about a GoFundMe page he set up for her expenses. Daniels revealed that she was considering dropping him as her lawyer.

“I knew about the first [fund], obviously, and I just started having people ask me like where the money went, was it going to be used to pay Trump? Was there money left over? And I feel like people who gave me money deserve to know where it went. It was so kind and generous for so many people to do this for me, and I’m not a thief,” Daniels said at the book discussion.

“I just wanted answers for these people, so I started asking for accounting and I couldn’t get it. He was supposed to, you know – the security is paid out of that and it just became difficult to get the monies. And I asked over and over and I find out on Twitter there’s now a second GoFundMe, and I hate finding shit out on Twitter. So, I called him out on it,” she added.

When asked if she has made up with Avenatti now, Daniels replied, “Well, he sent me the accounting and it looks good, but sometimes people just need a swift kick in the ass.” 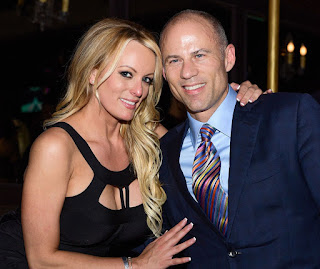 
He's not running due to his "family's" concerns-- I assume this doesn't mean the wife he's divorced of the other wife he's dragging his heels on finalizing his divorce from.


"I do not make this decision lightly -- I make it out of respect for my family," Avenatti said Tuesday in a statement. "But for their concerns, I would run."

He also said he wanted to "spend more time with my domestic violence victims."


Wombat-socho has Rule 5 Sunday: Babe In Toyland and FMJRA 2.0: Jungle Love out on time at The Other McCain (shouldn't that be the remaining McCain?).
Posted by Fritz at 9:44 AM