The news from the failed Flynn sentencing drama is still resonating. From PJ Media: Happy Wednesday morning! "Flynn wasn't sentenced on Tuesday, but he was flogged. He deserves many apologies indeed." Front Page: Democrat-Appointed Judge Lambastes Flynn. A different view of the Sen. Steven's case fiasco.

This isn’t the first time Sullivan, appointed in 1994 by President Clinton, has let criminal proceedings move forward against a prominent Republican defendant in the face of prosecutorial misconduct. When proof emerged during the 2008 corruption trial of the late Sen. Ted Stevens (R-Alaska) that unethical prosecutors had withheld exculpatory evidence, Sullivan refused defense requests to declare a mistrial. Eight days after the guilty verdict Stevens lost his reelection bid to Democrat Mark Begich.

A more comprehensive summary of the Steven's story is  found at American Thinker in Sullivan’s Travels with Mueller by William L. Gensert, who still thinks Sullivan is trying to do the right thing. I hope so. Adam Mill at the Federalist: The Evidence Coming Out Of The Flynn Case Makes Mueller Look Worse And Worse. Yep, the whole thing stinks. Also,  Leslie McAdoo Gordon FBI Abused The Law To Keep Flynn From Using His Right To Remain Silent. Via Insty, THE WALL STREET JOURNAL EDITORIALIZES ON THE FLYNN FIASCO:

Well, that was bizarre. We’re referring to the fiasco Tuesday of what was supposed to be the sentencing of Michael Flynn. The sentencing was postponed until next year, but not before federal Judge Emmet Sullivan damaged his own reputation with an extraordinary public attack on the former national security adviser for a crime he’s not been charged with or admitted to. . .

As I noted yesterday, people filed judicial ethics complaints against Brett Kavanaugh for less. But the right doesn’t play as rough as the left, even in the Trump era. 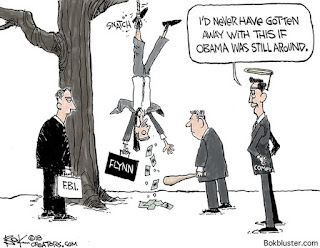 Just One Minute: Big If True


This is a partisan stem-winder but still - the author seems able to document his point that Mueller may have railroaded Gen. Flynn by concealing frelevant and potentially exculpatory evidence.

Does Mueller's behavior sound like the sort of thing that happens all the time but shouldn't? Or has he been way out of bounds here?

Popehat: Note to Michael Flynn: Federal Court Is Not Twitter. Try not to piss off the judge who is sentencing you. The Dersh: Michael Flynn now has three options to stay out of prison


But now that the judge has signaled his willingness to consider a prison sentence, Flynn has three options – none of them good.

Flynn’s first option is to ask the judge to throw out his questionable guilty plea – but it will be difficult to do so in light of his statement at the sentencing hearing that he accepts his guilty plea and knew he was doing wrong when he lied to the FBI.

Flynn’s second option is to cooperate even more, but there may not be much more he can say or do. If he admits he withheld some cooperation that would hurt him.

The former national security adviser’s third option – a nuclear one – would be to seek to recuse Judge Sullivan because of the judge’s prejudicial misstatements about treason and about Flynn being a foreign agent while working in the White House. But this, too, may backfire, because judges often punish defendants for “judge shopping”.

Matthew Walther on The Mueller delusion


We don't know why Flynn lied, but we also have no idea why the FBI was asking him gotcha questions in the first place. It wasn't authorized by James Comey, the FBI director at the time. There are really only two possible reasons. One is that sentient adults considered indicting Flynn under the terms of the Logan Act, which is the prosecutorial equivalent of announcing a snipe hunt. Another is that Andrew McCabe, then the deputy director at the bureau, went rogue, the way law enforcement officers at every level do every day. I'll let readers decide which is more likely.

But Mueller is not yet through with charging people with perjury: Mueller seeks Roger Stone’s testimony to House intelligence panel, suggesting special counsel is near end of probe of Trump adviser


It is the first time Mueller has formally asked the committee to turn over material the panel has gathered in its investigation of Russian interference of the 2016 campaign, according to the people.

Securing an official transcript from the committee would be a necessary step before pursuing an indictment that Stone allegedly lied to lawmakers, legal experts said.

The special counsel could use the threat of a false-statement charge to seek cooperation from Stone, as Mueller has done with other Trump advisers, such as former national security adviser Michael Flynn and longtime Trump lawyer Michael Cohen.

It is unclear what aspect of Stone’s testimony Mueller is scrutinizing. But Stone has given conflicting accounts about what prompted him to accurately predict during the 2016 race that WikiLeaks was going to unleash material that would hurt Democratic presidential nominee Hillary Clinton.
. . .
“I don’t think any reasonable attorney who looks at it would conclude that I committed perjury, which requires intent and materiality,” Stone said.

I'm not really seeing conflicts in his testimony so much as confusion. I'm still waiting for Mueller to bring charges against Brennan, Clapper and Comey for lying to Congress.

Another tongue bath for Mueller from WaPo: I talked to Mueller after Trump’s election. Here’s what was on his mind. But it's pretty clear he was ready to join a conspiracy to take out Trump. The "Mystery company" that Mueller subpoenaed is apparently one of the Russian ones. Mystery foreign company possibly tied to Mueller investigation subpoenaed. Good luck with enforcing that.

And speaking of Comey, via the Wombat's In The Mailbox: 12.19.18, Powerline's John Hinderacker analyzes his Congressional testimony in James Comey, Crooked Cop. WaEx: James Comey silent on whether FBI thought Trump and Russia worked together in 2016, because he can't find anything bad to say, and it really burns. Newsmax: House GOP Grilled Comey on Protocol in Questioning Flynn. Debra Heine PJ Media: Republicans Blast 'Corrupt Cop' James Comey After Second Closed-Door Interview. You assholes let your chance to do anything about it slip away. Da Caller: Comey Continues To Falsely Claim That Republicans Started Steele Dossier. Twitchy: ‘I didn’t make this up’: Rep. John Ratcliffe shares transcript of UNREAL exchange with James Comey. CNS News:
Comey: ‘Who Cares?’ Who Funded Steele Dossier Used to Get FISA Warrants to Surveil Trump Team.  Comey has very tenuous relationship with truth but he is a clever weasel.

Steele Dossier continues to confound. Da Caller confirms John McCain Associate Gave Dossier To BuzzFeed, and more on Buzzfeed as Buzzfeed Faces Major Setback in Defamation Defense, as Court Rules The Russian Businessman The Dossier They Printed Accused Is Not a "Public Figure" (Ace) but BuzzFeed Beats Defamation Lawsuit Over Trump Dossier Story. Apparently you don't have to check too hard for the truth before publishing.  At American Thinker, Steele-ing an Election by W.H. Lippincott.

Victor Davis Hanson: We Are Witnessing a Soft Coup of the Trump Administration (Video)


Oxford University’s Computational Propaganda Project report is the adult in the room, occasionally conceding the more nuanced reality of the Russian campaign by noting that peak Russian propaganda volume actually occurred long after the election during the Syria missile strike: a key national interest area for Russia. It also confirms what Facebook has already told us, that Russian activity actually increased after the election.

That suggests an influence operation rather than election interference.

It also reveals that the Russians bought over 1,000 ads targeting African-Americans and less than 300 targeting conservatives. There were 81 social justice ads and only 24 patriotism ads, 66 pro-gun ads and 70 LGBT ads, 43 veteran ads and 57 Muslim ads, not to mention 143 Latin American culture ads.

While Nate Silver puts it into perspective: It's far more likely that the Russians were just throwing a bunch of shit at the wall and seeing what stuck and that basing it on Cambridge Analytica data wouldn't have been meaningfully more effective than doing it at random.

Never-Trumper David French at NR hopes Yes, Donald Trump Is in Real Legal Jeopardy for Campaign-Finance Violations. and WSJ: Trump Testimony From Decades Ago Indicates Knowledge of Campaign-Finance Laws "Legal experts say that could be critical if investigators pursue a case over hush-money payments to women in the 2016 campaign". Friendly legal experts no doubt.


Then, Chelsea should be fair game as well in the Clinton Foundation scam.
Posted by Fritz at 10:27 AM