EPA and HUD: Major parts of the federal government begin shutting down for an indefinite closure

Large parts of the federal government shut down overnight after President Trump torpedoed a bipartisan spending deal because it lacked the money he demanded for a wall along the U.S.-Mexico border.

Funding for numerous agencies, including those that operate parks, homeland security, law enforcement, tax collection and transportation, expired at midnight. Close to 400,000 federal workers are expected to be home without pay until a deal is reached, and numerous services will be halted in that time, with the impacts broadening the longer the funding lapse lasts.

The shutdown intensifies a standoff between Trump, who is demanding $5.7 billion for a border wall, and congressional Democrats, who have vowed to block any wall funding and have the votes to do so. It marks a deflating final chapter for Republicans as they complete two years of unified GOP control in Washington — as well as an acrimonious prelude to the upcoming era of divided government, after Democrats take the House in January.

I had to dig all the way to the e-replica of today's WaPo to get this graphic showing the agencies hit hardest:

What the article fails to make clear is that the shutdown affects only 25% of the agencies, and 30% of the total federal workforce, a not inconsiderable amount, to be sure, but not the totality of the Feds. The remaining 75% of the agencies are already funded through regular appropriations, the way things used to be, with Congress actually pretending to think about how much money each agency needs to carry out its mission.

I think we can do without HUD and EPA for a few days. 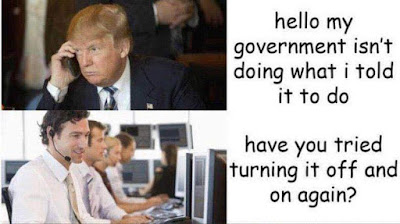