With no real surprises in Mueller's sentencing memo's and no real new information, Democrat have begun a relentless campaign to gin up support for impeachment, on the grounds that Trump may have conspired to defraud the United States (Mueller's favorite charge, because it's so nebulous) by paying off Stormy Daniels and Karen McDougal, somehow hiding the obvious fact that Donald Trump is a philander. NYT: Is This the Beginning of the End for Trump?, Da Hill: Schiff: Trump may face ‘real prospect of jail time’, Da Caller, Nadler Floats Impeachment, Says New Mueller Revelations Could Justify Removing Trump,  Powerline, Mueller’s theory: Trump defrauded voters, Fox,  Andrew C. McCarthy: Why Trump is likely to be indicted by Manhattan US Attorney

Yes, Cohen has stated he did the hands-on work in orchestrating hush-money payments to two women who claim to have had sexual liaisons with Trump many years ago (liaisons Trump denies).

But when Cohen pleaded guilty in August, prosecutors induced him to make an extraordinary statement in open court: the payments to the women were made “in coordination with and at the direction of” the candidate for federal office – Donald Trump.

Prosecutors would not have done this if the president was not on their radar screen. Indeed, if the president was not implicated, I suspect they would not have prosecuted Cohen for campaign finance violations at all. Those charges had a negligible impact on the jail time Cohen faces, which is driven by the more serious offenses of tax and financial institution fraud, involving millions of dollars.

Moreover, campaign finance infractions are often settled by payment of an administrative fine, not turned into felony prosecutions. To be sure, federal prosecutors in New York City have charged them as felonies before – most notably in 2014 against Dinesh D’Souza, whom Trump later pardoned.

“In marked contrast when it was discovered that Barack Obama’s 2008 presidential campaign was guilty of violations involving nearly $2 million – an amount that dwarfs the $280,000 in Cohen’s case – the Obama Justice Department decided not to prosecute.” https://t.co/5H8XdWR9Ga
— James Woods (@RealJamesWoods) December 9, 2018 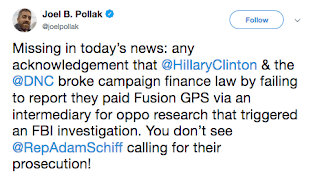 In "Lock 'Em Up Or Bust" Tom Maguire at One More Mininute:


My guess as to the Democratic spin is that the Obama-era violations were an administrative breakdown, not willful misreporting directed by The One. it'll be the old "the buck stops down there somewhere" defense.

Apparently, campaign violations are only felonies when committed by Republicans. The Guardian, Mob mentality: how Mueller is working to turn Trump's troops. Via The Last Tradition: Election finance expert: No proof Trump’s hush payments were campaign spending. Two good reasons to pay off the women, one legit (to protect family) the other potentially campaign violation (to protect campaign), the tie goes to the legitimate one. Also, please note that Congress have special Federal funds to pay off women, and that is almost certainly to protect their next campaign. A campaign violation committed by the Federal government under these rules. Andrew McCarthy, NRO, On Hush Money, the President’s Best Defense Is Lack of Criminal Intent

But wait, there's more, Hot Air (citing NYT): Is Mueller Building An Expansive Obstruction Case? IMHO, if you have two reasons for something, say firing James Comey, and one is legitimate (Comey deserved to be fired for his actions in the Clinton case) and the second can be construed as obstruction (protecting himself), the tie goes to the legitimate one. Da Spectator, Rabbi Fischer: Hush Money and Impeachment, WaT "Presidential Harassment": Trump Under Unprecedented Attack on Multiple Fronts, Roger L. Simon, PJ Media: The Russia Probe Becomes a Banal Sex Scandal. Donal Trump wasn't elected to be a saint.


Asked if he recalled who drafted the FBI’s “initiation document” for the July 2016 Russia investigation, Comey said, “I do not.” He again claimed not to know when asked about the involvement in that initiation of Peter Strzok, whose anti-Trump texts later got him removed from the special counsel’s probe.

When asked if the FBI had any evidence that anyone in the Trump campaign conspired to hack the DNC server, Comey gave a lengthy answer referring to Special Counsel Robert Mueller’s investigation as to why he couldn’t answer.

He is a master at dodging questions, and obfuscation. No wonder he ended up at the top! John Solomon at Da Hill: Comey’s confession: dossier not verified before, or after, FISA warrant. Another campaign violation that will go unpunished.


The towering ex-FBI boss confessed that the FBI had not corroborated much of the Steele dossier before it was submitted as evidence to a secret court to support a Foreign Intelligence Surveillance Act (FISA) warrant to spy on Trump campaign adviser Carter Page in the final weeks of the election.

And Comey admitted much of the dossier remained uncorroborated more than six months later when he was fired by President Trump.

I won’t waste too much time harping on the enormity of this confession. Everyday Americans now know that the FISA court process is an honor system and that the FBI may only submit evidence it has verified to the judges.

Briant Cates: It's game over for Comey & the SpyGate plotters. They knowingly presented an unverified Steele Dossier to the FISA Court to get a surveillance warrant for the Trump campaign.   Breitbart, James Comey Admits FBI Was Still Probing "Pee" Dossier Until Day He Was Fired, Comey: FBI probe of Russia initially looked at 4 Americans,  and he won't say who, although Carter Page, Michael Flynn, George Papadopoulos and Paul Manafort spring to mind. Ironically, Comey Tells House Panel He Suspected Giuliani Was Leaking FBI Information to Media, said the man who admittedly leaked information to the media (WSJ). The American Thinker Comey Lied


James Comey is a serial liar and arguably a serial felon who supervised and directed Andrew McCabe, Peter Strzok, and Lisa Page in an organized deep state coup to keep Hillary Clinton out of prison and Donald Trump out of the White House. And along the way he picked up a few million bucks thanks to a long-standing friend, colleague and benefactor, Robert Mueller, whom he then rewarded a license to overthrow a sitting President of the United States.

V.D. Hanson: Defeat and the Dossier Explain Everything, So Much Irony It's Mag[nitsky]netic

Sara Carter: Lawmakers Call For A Second Special Counsel As Evidence of Alleged Crimes Mount in Russia Investigation. I thought that's what the second IG was for, but a good idea anyway. Let's appoint all highly Republicans and watch the Democrats whine. 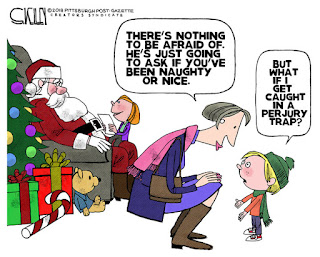 The clearest statement yet on why Jerome Corsi is suing Mueller, from Politico: Conspiracy theorist sues Mueller alleging illegal leaks and surveillance


“Defendant Mueller and his prosecutorial staff have demanded that Plaintiff Corsi falsely testify that he acted as a liaison between Roger Stone and WikiLeaks leader Julian Assange concerning the public release of emails downloaded from the DNC’s servers,” the complaint says.

Corsi is demanding $100 million in actual damages and $250 million in punitive damages for injury to his reputation. The suit, filed in U.S. District Court in Washington, is just the latest maneuver in a public campaign against Mueller by Corsi and his attorneys. Last month, they gave reporters copies of draft court documents showing that Mueller wanted Corsi to plead guilty to a false statements charge.

Prosecutors from Mueller’s office proposed that Corsi admit that he repeatedly lied to investigators about his interactions with Stone about his interest in emails WikiLeaks could release that would be damaging to Trump’s Democratic opponent, Hillary Clinton. In the draft plea documents, Corsi was to concede that his falsely said he rebuffed Stone’s attempt to go through him to make contact with WikiLeaks; falsely denied that Stone asked him to enlist someone else in the effort; and falsely denied conveying information about what hacked emails WikiLeaks had.


First, accused of lying about contacts with Russian-Ukrainian political consultant Konstantin Kilimnik.
Second, the alleged participation by Kilimnik in a conspiracy to obstruct justice.
Third, a financial wire transfer to a firm working for Manafort.
Fourth, information “pertinent to another Department of Justice investigation.”
Fifth, Manafort’s contact with administration officials.

But how many are really lies, and how many are not being told what they need to hear to get Trump?
Powerline on the Cohen sentencing memos:Cohen Can and Can't (2)


What we have here is a sort of preview of coming attractions that seem to me to mask the absence of “collusion,” although the memo’s tact makes it impossible to know.

WRAL: Done With Cohen, Federal Prosecutors Shift Focus to Trump Family Business. An investigation in desperate search of a crime.
Posted by Fritz at 10:02 AM