It Keeps going and going and . . . We continue to dissect the Flynn sentencing recommendation of no jail time:  Breitbart, Mueller’s Flynn Memo Disappoints Resisters: No Jail Time or Hints of Collusion


It is also not clear whether Flynn truly lied to investigators – the crime he pleaded guilty to. Both former FBI Director James Comey and former FBI Deputy Director Andrew McCabe told House Intelligence Committee investigators that they believed Flynn had not lied to the FBI when he was interviewed by two agents on January 24, 2017, according to the committee’s final report.

Flynn also had an incentive to plead guilty to lying: Mueller had also reportedly threatened to prosecute his son, Michael Flynn Jr., and Flynn’s siblings talked openly about how fighting the allegations against him were leading him to financial ruin.

Flynn’s brother, Joe Flynn, sent out a series of tweets on Tuesday after Mueller’s memo was released that suggested Flynn did not do anything wrong:


The moral of this story is: the process is the punishment. . . . Really, the objective of targeting Flynn has been met. There's no need to toss him in the clink because the deep state has severely damaged him. He's bankrupt, he lost his house, he's going to have a problem getting employed. I'm sure his security clearance has been permanently yanked so... what's he going to do to earn a living and take care of his wife and family? Remember, Flynn was the only person Obama told Trump not to bring on board in his administration. Obama and his administrative state thugs did not want Flynn coming in and undoing their globalist achievements.


Flynn sat for 19 interviews with the Special Counsel's office and other Department of Justice attorneys, according to the sentencing memorandum and a heavily redacted supplemental filing attached to the end of the primary memorandum . . . nothing in the sentencing memo to suggest collusion between the Trump team and Russia . . . denounced the Mueller team as “overzealous media inspired prosecutors" and "sick puppies.”

Yeah, there's nothing about colluding with RUSSIA in there, and we were assured that Flynn was up to no good with RUSSIAN Ambassador Kislyak back in December 2016 — that's why he "lied" about the call. The FBI agents who interviewed him did not think Flynn lied. Total ruination is the price of being in Trump's orbit. Buckle up, Mueller is still truckin'.

Via Wombat-socho's In The Mailbox: 12.05.18, Tom Maguire at Just One Minute has Out Like Flynn


Mueller recommends no jail time for Flynn, although he remains a felon.

I assume The Resistance is swooning over the news that Flynn provided substantial assistance and sat for nineteen interviews. That clanging they hear itsn't Salvation Army bells, its jail cells slamming shut! But for all we know, Flynn sat for a series of "I'd love to help and I'm telling you all I know, which s nothing" interviews. Which, BTW, can still be helpful to a old-school prosecutor trying to understand a case. Since Mueller is trying to invent a case (we think, and we might be wrong!) that may be less helpful.

Now Trump should pardon him to remove the felony conviction. For a conspiracy theory laced view, consult Sundance at CTH: Mueller Releases Flynn Sentencing Memo – Recommends Leniency, No Incarceration, Heavy Focus on Turkish Lobbying Issues… Normally I disapprove of conspiracy theories, but there are real conspiracies:


I’m not convinced that Flynn lied. There’s a good possibility Flynn was honest but his honesty contradicted Pence’s national statement on CBS; and he likely tried to dance through a needle without being overly critical of VP-elect Pence misspeaking. Remember, the alternative, if Flynn is brutally honest, is for the media to run with a narrative about Vice-President Pence is now a national liar in the media.

That’s why the issue of how the FBI interviewers write the 302 summary of the interview becomes such an important facet. We see that dynamic again playing out in the messages between Lisa Page and Peter Strzok with Andrew McCabe providing the guidance.

♦February 14th, 2017, text messages – here is a note about the FBI reports filed from the Flynn interview. Peter Strzok asks Lisa Page if FBI Deputy Director Andrew McCabe is OK with his report: “Also, is Andy good with F-302?”

That would be Flynn’s 302. The FBI interpretation of the Flynn interview, is now the way the FBI can control the interview content…. and, specifically because the only recourse Flynn would have to contradict that FBI interpretation would be to compromise the Vice President… Flynn cannot challenge the structure of the narrative within the 302 outline.

See what happened? Does it all make sense now? 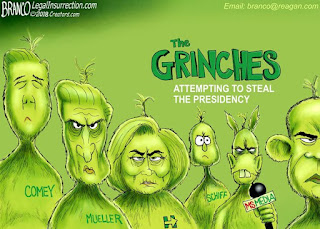 If Mueller, really Weissman probably, forced Flynn to confess to crime he did not actually commit, he should be the one with the felony conviction.

At Vanity Fair: Is This It?: A Trump-Hater’s Guide to Mueller Skepticism


If it’s any consolation to Trump haters, we san say this much: the special counsel’s office is going to put together a hell of a report. It will have less sex than Starr’s did, but that’s for the best, and the testimony of Michael Cohen will still guarantee a lot of great scenes, many of them certain to become immortal and embarrassing. Trumpworld won’t fare well under a bright light. Like Starr, Mueller is also likely to include footnotes and selections that will hint at criminality, the things he suspects but couldn’t prove, and the most ardent believers in collusion will claim vindication. But the international conspiracies will be few, and the collateral damage of the Russia scare will be extensive, stretching far beyond Trump or his circle to the country as a whole. It might hurt a president who many Americans hate, but even the president’s most ardent foes should reflect on a question that will linger: Was it worth it?

Also from Wombat-socho's In The Mailbox: 12.05.18, Legal Insurrection explores how Mueller Claims Flynn Gave “First-Hand” Details About Trump Transition Team’s Contact With Russian Officials — But What Part of That is Illegal? It's only illegal when a Republican does it. 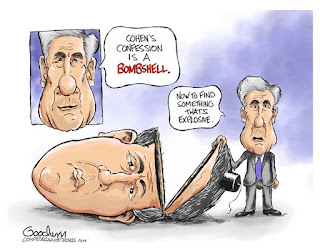 Jason Chaffetz asks the obvious question:  Why is Michael Cohen prosecuted when Hillary Clinton, Eric Holder and Lois Lerner were not?


There isn’t enough room on the internet to list all of the examples of double standards and unequal applications of the law. The inconsistency always seems to conveniently favor the Democrats and penalize those connected to Donald Trump; This obvious disconnect legitimately erodes faith in our justice system and further divides the country.


Sources tell me the targeted documents may provide the most damning evidence to date of potential abuses of the Foreign Intelligence Surveillance Act (FISA), evidence that has been kept from the majority of members of Congress for more than two years.

The email exchanges included then-FBI Director James Comey, key FBI investigators in the Russia probe and lawyers in the DOJ’s national security division, and they occurred in early to mid-October, before the FBI successfully secured a FISA warrant to spy on Trump campaign adviser Carter Page. The email exchanges show the FBI was aware — before it secured the now-infamous warrant — that there were intelligence community concerns about the reliability of the main evidence used to support it: the Christopher Steele dossier.

The exchanges also indicate FBI officials were aware that Steele, the former MI6 British intelligence operative then working as a confidential human source for the bureau, had contacts with news media reporters before the FISA warrant was secured. The FBI fired Steele on Nov. 1, 2016 — two weeks after securing the warrant — on the grounds that he had unauthorized contacts with the news media.

But the FBI withheld from the American public and Congress, until months later, that Steele had been paid to find his dirt on Trump by a firm doing political opposition research for the Democratic Party and for Democratic presidential candidate Hillary Clinton, and that Steele himself harbored hatred for Trump.

If the FBI knew of his media contacts and the concerns about the reliability of his dossier before seeking the warrant, it would constitute a serious breach of FISA regulations and the trust that the FISA court places in the FBI. That’s because the FBI has an obligation to certify to the court before it approves FISA warrants that its evidence is verified, and to alert the judges to any flaws in its evidence or information that suggest the target might be innocent. 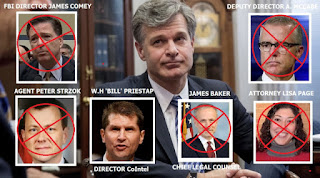 And Then There Was None – Bill Priestap Resigns… Clearly a man who knew when and how to keep his head dowm. (Sundance at STH) Time to update the graphic.


The enigma man, E.W. “Bill” Piestap is retiring from the FBI. Bill Priestap is the FBI Asst. Director in charge of all counterintelligence operations. Priestap was FBI Agent Peter Strzok’s boss; he was also at the epicenter of the story surrounding every action taken by the FBI in the Clinton investigation and the Trump campaign investigation.

Bill Priestap was copied on every email of consequence including the writing of the Clinton exoneration talking points delivered by FBI Director James Comey. Priestap was the central figure on the FBI side of both Clinton and Trump operations. “Bill” is mentioned in hundreds of text messages sent by Peter Strzok and Lisa Page.

In short, Bill Priestap was everywhere – except where you would most likely expect to find him, in media discussion. The timing seems curious though the Wall Street Journal goes to great lengths to describe the timing as a mere happenstance due to his 20-year service anniversary and the opportunity to retire with full benefits.
. . .
Priestap was so important that during FBI Director James Comey’s March 20th, 2017, congressional testimony Director Comey told congress it was Bill Priestap who recommended that congressional oversight should not be notified of the ongoing counterintelligence operations. Priestap’s instruction was so important that despite the rules violation FBI Director Comey followed his recommendation and kept congress in the dark.

More on how Jerome Corsi Challenges Robert Mueller by Jonathon Moseley at the American Thinker:


Mueller's conspiracy theorists argue that Stone and Corsi had foreknowledge that Assange would "hack" DNC emails. They intentionally confuse when Wikileaks obtained documents and when it released them. On July 5, 2016, a DNC employee or a burglar physically connected an external hard drive to the DNC's computers on site.

The data dumps from Wikileaks show that the DNC emails were copied at extraordinarily high speed. "On the evening of July 5, 2016, 1,976 megabytes of data were downloaded from the DNC’s server. The operation took 87 seconds. This yields a transfer rate of 22.7 megabytes per second. These statistics are matters of record and essential to disproving the hack theory. No Internet service provider, such as a hacker would have had to use in mid-2016, was capable of downloading data at this speed."

And remember: those would be the DNC servers that the DNC refused to allow the Federal Bureau of Investigation to examine.

Mueller knows he is investigating a $12 million fairy tale told to Christopher Steele by Russian intelligence agents. Steele's "dossier" was paid for by the presidential campaign of Hillary Clinton through Perkins Coie. Steele went to Moscow with $12 million to spend. Clearly, Russia's intelligence services eagerly supplied disinformation. The "dossier" was written, in effect, by Vladimir Putin and his KGB thugs. Russia of course favors chaos and the weakening of the United States, and never favored one candidate over the other.

As a result, we are now seeing that Mueller's investigation is the true conspiracy theory.

Discovery for the suit would be very interesting; which is why it probably won't go very fair.
Posted by Fritz at 9:30 AM