A Smidgen of Russiagate

A little more has filtered through the web of the Reign of Pain (government shutdown), the Syria withdrawal and Gen. Mattis' resignation. Starting with another general who made the mistake of getting mixed up with politicians, who are even more dreadful than generals. At American Greatness, Victor Davis Hanson gives a pretty nice run down on the Flynn persecution in The Neverending, Mysterious Saga of Michael Flynn. I don't see anything new, but it's a nice summary, in case you've forgotten some details about how much this prosecution stinks. Similarly, at Da Federalist, Margot Cleveland writes The Most Important Thing About Michael Flynn Is Not His Guilt, But His Politicized Prosecution

Flynn’s fate is but that of one man, and while to his family and friends the difference between probation and a five-year sentence holds the utmost significance, to the average American, it matters not.

But what matters greatly—or should—is the lesson the Flynn prosecution teaches about justice in America: whether one is a friend or a foe of the political ruling class and their career concubines dictates the justice meted out. And an unequal justice under the law is no justice at all.

Something I've been wondering about, too, Paul Sperry at RCI tells about John Huber, Justice Dept. Sheriff Who Never Quite Rode Into Town


John Huber has developed almost mythical status among pro-Trump tweeters since former Attorney General Jeff Sessions directed him to investigate why the FBI spied on Trump’s aides and whether they protected Hillary Clinton and her foundation over alleged misdeeds. They hoped the Salt Lake City-based prosecutor would aggressively expose the malfeasance that has already led to firings and resignations among the bureau’s top brass. Instead, more than a year since his appointment, Huber’s lack of traction on either front is leading many once hopeful supporters to dismiss his investigation as a “sham."
. . .
While some witnesses and their attorneys complain he’s not doing his job, some critics who once had high hopes for Huber now suspect he was never expected to. They say Huber’s appointment was always political, that the Justice Department had no interest in exposing its own corruption and named this longtime department official to mollify Republicans who clamored for the appointment of a second special counsel to investigate FBI and Justice activities under the Obama administration.

“At the time, people wanted a special counsel, but Jeff Sessions announced he brought in Huber and people said, ‘OK, we got Huber on it,’ ” former Justice Department prosecutor Victoria Toensing said. “But it was a head fake.”


Just like the false framework surrounding the long-forgotten U.S. Attorney John Lausch; the guy who was supposedly hired to facilitate DOJ record production but actually did nothing of the sort; Sperry discovers the framework around U.S. Attorney John Huber was manufactured by career officials inside the DOJ to tamp down problematic demands for a second special counsel.

Worse still, and absolutely confirming information from our own contacts within the OIG, Paul Sperry outlines how Michael Horowitz has not interviewed key people who would be part of any authentic FISA abuse inquiry. [READ HERE]

Unfortunately, this information is directly in-line with information received by CTH in September of 2018. According to people with knowledge of DOJ-OIG operations, and restrictions upon the IG imposed by chain-of-command authority, Horowitz’s investigation has been limited by Mueller’s team.

According to our own independent sourcing, as a direct consequence of the Sessions recusal issues, DAG Rosenstein was in charge of approving all OIG investigative document production and DOJ/FBI scheduling for testimony. Mueller’s team gave Rosenstein a list of restrictive lines of inquiry that would be considered obstructing their own investigation and should thereby be considered ‘out-of-bounds‘ for OIG review; those instructions broadly created limits on what Horowitz could see, and who Horowitz could interview.

General Counsel Boente, hired by Christopher Wray, ultimately concurred with Mueller and Rosenstein’s decision thereby blocking any internal investigative efforts under the auspices of protecting the integrity of the ongoing Mueller probe.

From Breitbart,  James Comey: ‘There’s No Deep State’. Fish don't know there's such a thing a water, too. James Gagliano, WaEx: 'Irreparable damage to the bureau': Former FBI agents sound off on James Comey. Shockingly, not all are fans of their former moralist-in-chief. From  Doug Ross 6 Key Facts About the Preening Moralist James @Comey 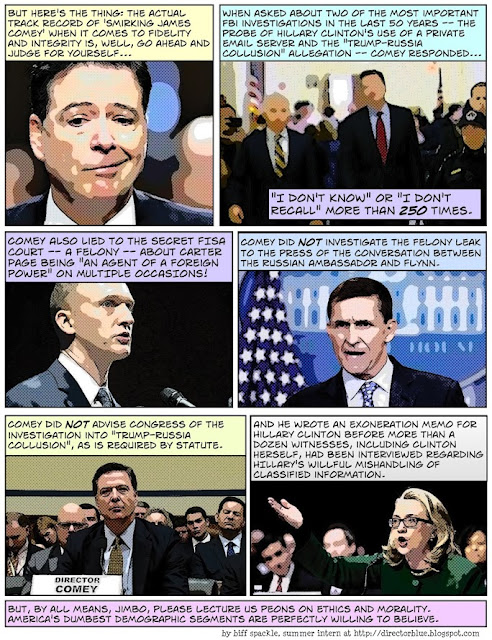 Mueller to the Supreme Court. But it's not as important as you might think. From Da Caller, Supreme Court Intervenes In Apparent Mystery Mueller Case

Roberts’ order could mark the first time that the Supreme Court has intervened in the Mueller inquiry.

Very little is known of the case, which reached the justices on Saturday, because the matter has proceeded through the federal courts under seal, meaning strict confidentiality prevails over every detail.

The scant facts which are available about the case are these: a grand jury issued a subpoena to an unnamed company owned by a foreign government some time during the summer of 2018. That firm, referred to in court filings as “the corporation” has been fighting the subpoena in federal court since August.

The U.S. Court of Appeals for the D.C. Circuit released one of the few public filings in the matter on Dec. 18. Since the entity is owned by a foreign government, it sought to quash the subpoena under the protections of the Foreign Sovereign Immunities Act. The D.C. Circuit rejected those arguments, and found that the corporation must comply with the subpoena.

The company appealed that decision to the Supreme Court Saturday. The corporation faces a fine for every day that it fails to abide by the subpoena.

Roberts’ Sunday night decision temporarily halts the non-compliance fines. The Department of Justice must submit a response to the foreign company’s application by Dec. 31.

Probably one of those Russian companies that Mueller accused of interfering in the election. I don't like treating real spies and agents provocateur through make-believe judicial proceedings. A knife in the back in the dark seems more appropriate.

As if we needed anymore evidence that charges of collusion with Russia had been trumped up, Daniel Greenfield at Front Page explains how the "Expert" Accusing Trump of Russian Support Caught Faking Russian Support for GOP.


So the timing on this latest revelation couldn't be better. After this there is no way that New Knowledge should ever treated as anything except a Dem dirty tricks operation. And its report should be burned in the nearest incinerator as a piece of partisan hackery.


One participant in the Alabama project, Jonathon Morgan, is the chief executive of New Knowledge, a small cyber security firm that wrote a scathing account of Russia’s social media operations in the 2016 election that was released this week by the Senate Intelligence Committee.
An internal report on the Alabama effort, obtained by The New York Times, says explicitly that it “experimented with many of the tactics now understood to have influenced the 2016 elections.”
The project’s operators created a Facebook page on which they posed as conservative Alabamians, using it to try to divide Republicans and even to endorse a write-in candidate to draw votes from Mr. Moore. It involved a scheme to link the Moore campaign to thousands of Russian accounts that suddenly began following the Republican candidate on Twitter, a development that drew national media attention.
“We orchestrated an elaborate ‘false flag’ operation that planted the idea that the Moore campaign was amplified on social media by a Russian botnet,” the report says.
Mr. Morgan said he could not account for the claims in the report that the project sought to “enrage and energize Democrats” and “depress turnout” among Republicans, partly by emphasizing accusations that Mr. Moore had pursued teenage girls when he was a prosecutor in his 30s.

And the people behind it were Obamaites.


Despite its small size, the Alabama project brought together some prominent names in the world of political technology. The funding came from Reid Hoffman, the billionaire co-founder of LinkedIn, who has sought to help Democrats catch up with Republicans in their use of online technology.
The money passed through American Engagement Technologies, run by Mikey Dickerson, the founding director of the United States Digital Service, which was created during the Obama administration to try to upgrade the federal government’s use of technology. Sara K. Hudson, a former Justice Department fellow now with Investing in Us, a tech finance company partly funded by Mr. Hoffman, worked on the project, along with Mr. Morgan.

There's also the fake candidate. And the lies.


Mr. Morgan confirmed that the project created a generic page to draw conservative Alabamians — he said he couldn’t remember its name — and that Mac Watson, one of multiple write-in candidates, contacted the page. “But we didn’t do anything on his behalf,” he said.
The report, however, says the Facebook page agreed to “boost” Mr. Watson’s campaign and stayed in regular touch with him, and was “treated as an advisor and the go-to media contact for the write-in candidate.’’ The report claims the page got him interviews with The Montgomery Advertiser and The Washington Post.

Now how much of the Russian 2016 trolling was really done by Dems? Particularly the ones who are such experts on it?