The dangerous totalitarian thugs — it would be wrong to call them “students” — who attend Claremont McKenna College prevented anyone from entering the venue where author Heather Mac Donald gave a presentation last week about her book The War on Cops: How the New Attack on Law and Order Makes Everyone Less Safe. One wonders why parents would pay $50,945 a year in tuition for their children to go to a school controlled by despicable scum who chant obscene slogans:


“We are here to shut down the f–king fascist,” announced an organizer to a crowd of around 100 students. The protesters subsequently marched to the Ath around 4:30 while chanting. An organizer shouted “How do you spell racist?” into a megaphone; the marchers responded “C-M-C.”
When they arrived, the protesters were greeted by around two dozen Campus Safety officers and Claremont police officers, stationed at various locations around the building. . . .
The protesters continued their chants, including “hey hey, ho ho, Heather Mac has got to go,” “shut it down,” and—most frequent and sustained—“black lives matter.” Some of the officers appeared visibly uncomfortable during chant of “from Oakland to Greece, f–k the police.” 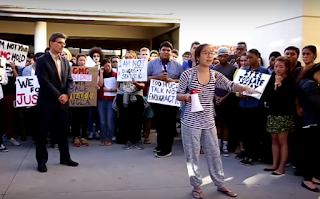 
Students filled spaces around Ath, blocking the front and back entrances. Nobody was allowed to enter the building, including students and professors who had signed up for the talk.

These were not “protesters,” but rather a criminal mob engaged in a violation of the First Amendment right to free speech. A student group had invited Heather Mac Donald to campus to give a speech, and the totalitarian thugs threatened violence to prevent that speech. When a mob is chanting “f–k the police,” and declaring their intention to “shut down the f–king fascist,” isn’t the threat of violence obvious? 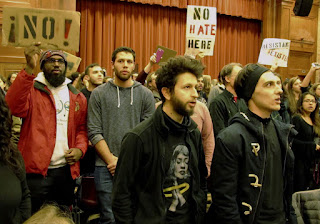 Wellesley student editorial: “Hostility may be warranted” towards those who embrace “hate speech” after reeducation


We have all said problematic claims, the origins of which were ingrained in us by our discriminatory and biased society. Luckily, most of us have been taught by our peers and mentors at Wellesley in a productive way. It is vital that we encourage people to correct and learn from their mistakes rather than berate them for a lack of education they could not control. While it is expected that these lessons will be difficult and often personal, holding difficult conversations for the sake of educating is very different from shaming on the basis of ignorance.

This being said, if people are given the resources to learn and either continue to speak hate speech or refuse to adapt their beliefs, then hostility may be warranted. If people continue to support racist politicians or pay for speakers that prop up speech that will lead to the harm of others, then it is critical to take the appropriate measures to hold them accountable for their actions. It is important to note that our preference for education over beration regards students who may have not been given the chance to learn. Rather, we are not referring to those who have already had the incentive to learn and should have taken the opportunities to do so. Paid professional lecturers and politicians are among those who should know better.

Also linked at Pirate's Cove in the weekly "Sorta Blogless Sunday Pinup" and links.
Posted by Fritz at 9:27 AM