Reason #5528 That Trump Was Elected 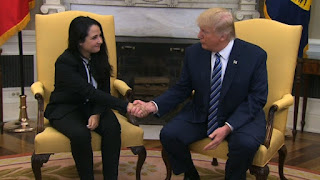 
An Egyptian American charity worker who was imprisoned in Cairo for three years and became the global face of Egypt’s brutal crackdown on civil society returned home to the United States late Thursday after the Trump administration quietly negotiated her release.

President Trump and his aides worked for several weeks with Egyptian President Abdel Fatah al-Sissi to secure the freedom of Aya Hijazi, 30, a U.S. citizen, as well as her husband, Mohamed Hassanein, who is Egyptian, and four other humanitarian workers. Trump dispatched a U.S. government aircraft to Cairo to bring Hijazi and her family to Washington.

Hijazi, who grew up in Falls Church, Va., and graduated from George Mason University, was working in Cairo with the Belady Foundation, which she and her husband established as a haven and rehabilitation center for street children in Cairo.

The couple and their co-workers had been incarcerated since May 1, 2014, on child abuse and trafficking charges that were widely dismissed by human rights workers and U.S. officials as false. Virtually no evidence was ever presented against them, and for nearly three years they were held as hearings were inexplicably postponed and trial dates canceled. Human rights groups alleged that they were abused in detention. 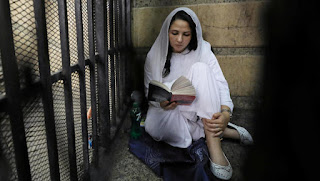 Trump rescued an American Muslim? But I thought he hated Muslims!


It was not until Trump moved to reset U.S. relations with Egypt by embracing Sissi at the White House on April 3 — he publicly hailed the autocrat’s leadership as “fantastic” and offered the U.S. government’s “strong backing” — that Egypt’s posture changed. Last Sunday, a court in Cairo dropped all charges against Hijazi and the others.

Hey, it's not like he dropped off a few billion in unmarked small American bills, or sent 5 Gitmo prisoners home to kill again. One theory on how he got them back? He asked . . .
Posted by Fritz at 8:09 AM