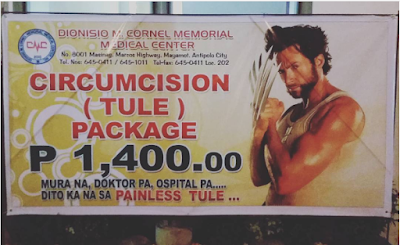 The advertisement for Dionisio M. Cornel Memorial Medical Center in Antipolo features an image of Hugh Jackman as the adamantium-clawed character he played in the X-Men and Wolverine films next to text promoting the clinic's circumcision service.

The advertisement went viral after a photo was shared online by Joey deVilla, a blogger and self-styled "rock accordionist." The text at the bottom of the advertisement roughly translates to: "Cheap, doctor, hospital... this is where you get painless circumcision!"

The poster says the foreskin removal service -- which is probably not actually carried out by a mutant super hero with retractable claws -- costs about $28. 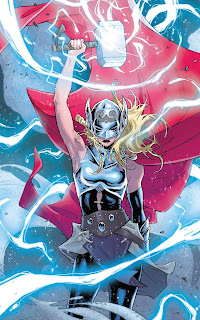 However, back in the United States, the Marvelous plan to suck up to the people at Manhattan parties by turning the Marvel superheroes into exemplars of social justice is falling flat: Who could have guessed that “diverse” characters would tank Marvel’s sales?. Me, for one.


I found it more than a little odd (to say the least) when I heard that Thor was going to be a woman and Iron Man was being downgraded to teenager status, but didn’t think too much about it. Still, it sounded like a risky idea from a business perspective and that apparently turned out to be the case. The Guardian reports that sales for Marvel comics have tanked and their feedback is indicating that “diversity” isn’t a panacea for all things. 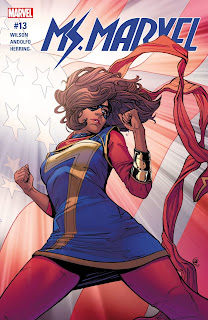 Over recent years, Marvel has made efforts to include more diverse and more female characters, introducing new iterations of fan favourites including a female Thor; Riri Williams, a black teenager who took over the Iron Man storyline as Ironheart; Miles Morales, a biracial Spider-Man and Kamala Khan, a Muslim teenage girl who is the current Ms Marvel.
But speaking at the Marvel retailer summit about the studio’s falling comic sales since October, David Gabriel told ICv2 that retailers had told him that fans were sticking to old favourites. “What we heard was that people didn’t want any more diversity,” he said. “They didn’t want female characters out there. That’s what we heard, whether we believe that or not.”

I hope they have better marketing people on the job than the one quoted in this article because it sounds like they’re taking away precisely the wrong message here. It clearly looks like someone is trying to turn this into some sort of social justice warrior battle when the far more likely explanation is that it comes down to simple brand management and marketing. Making a statement such as, “people didn’t want any more diversity… didn’t want female characters” simply sounds ignorant. What people actually don’t want is you messing around with a known, established brand which your customers grew up with, along with their parents and even grandparents. In some cases you’re messing with legendary figures which predate Christianity.

Here’s a clue for the folks at Marvel. Thor was a dude. He was a big, massively muscular dude. And yes… while I’m sure I’ll be crucified for saying it, he was a white dude with blonde hair. Because he was Nordic. That’s not a racist thing… it’s just the genetics of the folks who dreamed him up. Making him into a girl isn’t suddenly going to change history.

Even the brands which are newer by millennia have been around for a couple of generations. Iron Man isn’t a teenager. He’s an adult. And yet again, he was white. Sorry about that. So was Peter Parker.

Male teenagers and recent adults, the primary consumers of comic books, are exquisitely sensitive to the idea they are being lectured. While introducing new "diversity" characters won't upset them (more imaginary females with huge boobs are always welcome), changing the characters they have some minor emotional attachment to is bad marketing.

Wombat-socho finally gets around to the long awaited "Rule Five Wednesday: Double-Dip Easter Edition."
Posted by Fritz at 10:32 AM