Reason #5512 That Trump Was Elected

Have I ragged on academics yet? I have? Well, let's do it again. University Teacher @LarsMaischak Advocates Death for President Trump


Tweets from a Fresno State lecturer Lars Maischak not only demonstrate stark disagreement with capitalism, Christianity, and the GOP, but also a declaration that President Trump “must hang” to save democracy. . . .
Other tweets on Maischak’s profile demonstrate the ideology behind statements about Trump hanging and explain why universities across the country are now viewed with disdain by average, salt-of-the-earth Americans.

This is the kind of person that Fresno State University considers fit to teach history to recent high school graduates. Did you know, by the way, that the state of California has “nearly $400 billion in unfunded liabilities and debt”? Did you know that California “is projected to run a $1.6-billion deficit” in the next fiscal year? It would seem that the government of California needs to reduce its expenses, and perhaps the taxpayers of California could get by with one less teacher at Fresno State.

But I’m probably a “fascist troll” for thinking this way. 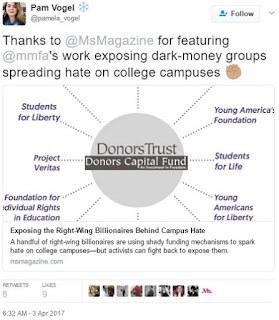 A lot of fruits and nuts come from Fresno.

But as Stacy McCain also reminds us, hate is strictly a Republican vice: ‘Hate’ as a Synonym for ‘Republican’.


Anything that is not liberal is labeled “hate,” and anything which is not about promoting the Democrat Party is “right-wing” or “far right.” Any appearance on a college campus by anyone associated with conservative or Republican (i.e., “far right”) political ideas is funded by “right-wing billionaires,” and this “hate” is “putting students in danger.”

The Left deliberately encourages this simple-mind intolerance, demonizing their political opponents, even while they accuse Republicans of “extremism,” “hate” and being “ideologically driven.” But yeah, let’s talk about shady billionaires with political agendas . . .