Reason #5518 That Trump Was Elected 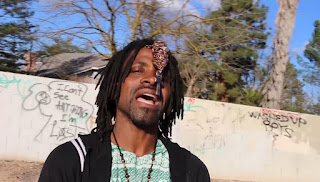 Domestic terrorists, and the media's unwillingness to confront what they are: Fresno Massacre: Three White Men Murdered by Kori Ali Muhammad


Three people were shot and killed after a man went on a shooting spree Tuesday in Fresno, randomly shooting at four white men, killing three, before he was taken into custody, police Chief Jerry Dyer said.
The 39-year-old suspect, identified as Kori Ali Muhammad, is also suspected in the fatal shooting of a security guard outside a Motel 6 on Blackstone Avenue in central Fresno Thursday. He is facing four counts of murder and two counts of attempted murder, Dyer said. He said Muhammad had expressed dislike of whites in Facebook posts; all of the victims were white. Dyer called it a “random act of violence.” 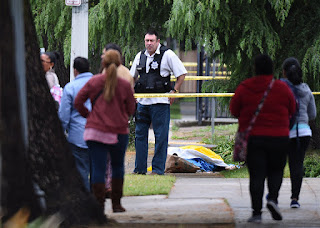 
The suspect in a series of shootings in downtown Fresno wrote frequently about the conflict between whites and blacks and did not seem well in recent days, according to family members.
Kori Ali Muhammad, 39, has been arrested after a shooting spree killed three people. Police have not provided a motive in the attack. As he was taken into custody, he yelled out “Allahu Akbar,” Fresno Police Chief Jerry Dyer said. But officials stressed they are not sure whether this was an act of terrorism.
According to his grandmother, Kori Muhammad changed his name from Kori Taylor to Kori Ali Muhammad when he was between ages 14 and 16. . . .
In a span of a few minutes Tuesday morning, Muhammad, 39, fatally shot three white men he randomly encountered while walking through the streets of Fresno, police allege. The rampage was preceded by a deadly encounter Thursday night at a Motel 6, where police said Muhammad had killed . . . a security guard.
Together the killings were Muhammad’s contribution to a war he believed was ongoing between white and black men, his father, Vincent Taylor, said.
A Facebook profile page for a Kori Ali Muhammad from Fresno paid homage to black pride and black nationalism, with images of the red, green and black Pan-African flag and images of a raised fist. The page listed him as a “warrior” for RBG Nation, referencing red, black and green.
He posted numerous photos of himself in traditional African garments.


The accused gunman has a criminal history. According to federal court records, Kori Muhammad, previously known as Kori Taylor, was arrested in 2005 on federal drug charges and pleaded guilty to possession of cocaine base with intent to distribute and possession of a firearm with a prior felony conviction. He received 110 months in prison, along with 92 months of supervised release, which ended early in September 2016.
One of the court documents included a motion for a psychiatric hearing because his attorney said he was suffering from hallucinations, paranoia and psychosis.

A violent criminal with a history of mental illness who hates white people — so he’s just a typical Democrat voter, really.

So was he a black nationalist, or a wanna be Islamic warrior? Why choose, embrace the healing power of "and"

The suspect, 39-year-old Kori Ali Muhammad, holds fervent anti-Trump beliefs according to his social media profile, and he told police afterward that he hates white people.

Rather than reporting the gunman’s literal words, however, the AP reported the gunman as saying “God is great.”

On Twitter, the AP’s report gave no indication that the suspect’s words were said in Arabic.

The media's job is to cover the news, lwith a plastic bag, until they smother it. More: Are you a White man? Is it funny when you die?

Democrats in a public, political meeting cheer and laugh at the mention of the increased number of white men committing suicide.

The speaker says, maybe I should not say this in public, but when I heard more White men are committing suicide, I almost said “yeah, great!”.

But he does say it, and the crowd likes it, as he knew they would.

Don't expect to see that played on ABC, NBC, MSNBC, CBS or NPR anytime soon.
Posted by Fritz at 7:54 AM