Reason #5502 That Trump Was Elected 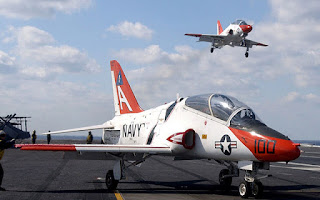 More than 100 U.S. Navy instructor pilots are refusing to fly in protest of what they say is the refusal of top brass to adequately address an urgent problem with training jets’ oxygen system, multiple instructor pilots tell Fox News.

Among the hundreds of student pilots affected is Marine 1st Lt. Michael Pence, son of Vice President Pence – a factor that could put added pressure on the Pentagon to resolve the dispute.

“Right now we don't have the smoking gun,” he cautioned.

In the last five years, physiological episodes, caused in part by problems with the oxygen system, have nearly quadrupled on the T-45 training jet, according to Capitol Hill testimony last week by senior naval aviators.

The Navy is now looking at grounding the entire fleet of T-45s for the next few days, according to multiple pilots.

“Histotoxic hypoxia” is the medical term associated with the disorientating disorder which can put pilots’ lives at risk, as well as those of civilians on the ground below. Two instructor pilots say the training jets are now averaging three incidents a week, as the Navy struggles to get to the bottom of the contamination.

“It can happen without warning,” one pilot said. “The system doesn’t detect contaminants.”

A number of instructors cited recent episodes as reasons for the abrupt work stoppage.

Last week, a student from training squadron VT-86 in Pensacola, Fla., had to be “dragged out” of his jet because he became “incapacitated” from the faulty oxygen system, according to two flight instructors.

In March, a British exchange instructor pilot with thousands of hours in the cockpit had to conduct an emergency landing during a training flight near Meridian, Miss., after both he and his student experienced hypoxic symptoms.

In August, a flight instructor and his student were forced to eject near Kingsville, Texas, when they felt symptoms of hypoxia, crashing the multi-million dollar jet.  Both pilots ejected safely and were not seriously injured.

Last month, there were 10 episodes in T-45s, according to Shoemaker.

I notice the Patuxent River Naval Air Station was never mentioned. We see a lot of T-45s flying around the base