Now that coal has been toppled from its perch as America’s biggest source of power, environmentalists are ready to move on down the fossil fuel list and tackle what they perceive as another enemy of the planet: natural gas. Bloomberg reports:


U.S. environmentalists have vowed to go after gas-fired power plants with the same vengeance they’ve used to force the retirements of hundreds of coal facilities. Even coal miners are warning their fossil fuel kin to beware. Gas producers “will be next on the list of the industries to be destroyed,” says Robert Murray, chief executive officer of U.S. coal miner Murray Energy Corp.

This is a farce, if for no other reason than because natural gas—not environmentalist lobbying or renewables—is responsible for dethroning Old King Coal. A flood of cheap shale gas has been outcompeting coal on price, and this past year the hydrocarbon supplied 33.8 percent of America’s electricity, more than any other source. To put that in perspective, coal made up 30.4 percent of our power production, while wind and solar contributed just 5.6 and 0.9 percent, respectively.

As seen above, the demise of coal is much more in the news than in reality. Natural gas has barely passed it as the largest source of electric power, largely through the work of fracking, and it's a damn good thing, because gas is cleaner, easier to transport, and now, cheaper.Win win. Sorry coal miners, if you can't sell coal, learn to work on a fracking rig. 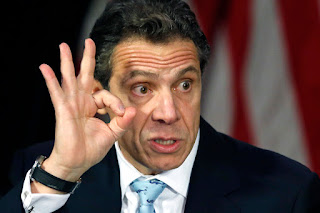 Governor Cuomo of New York is well ahead on the plan: Cuomo’s war on pipelines is crushing New York’s economy. How is that working out for New York?


When Team Cuomo blocked a gas pipeline this month, and another last year, we warned of the fallout. A new report out Monday puts a price tag on such bans — and points out what’s really going on.

The study, by the US Chamber of Commerce’s Institute for 21st Century Energy, found that the Northeast (New England, New York, New Jersey and Pennsylvania) is paying more for natural gas, losing tens of thousands of jobs and emitting more greenhouse gases than necessary thanks to “self-imposed” local “pipeline constraints.”

The reason: lack of enough gas pipelines, says the study. It cites a Federal Energy Regulatory Commission report that blames bottlenecks in the region’s distribution network for the high prices. A study by the nonprofit North American Electric Reliability Corporation echoed that finding.

I'm of two minds on this. New York has every right to elect an idiot as governor (goodness knows we in Maryland do it fairly routinely). As far as I'm concerned, the voters in New York City, can pay through the nose, or freeze in the dark. However, as usual, the rural residents of New York State are being deprived of good jobs, and being subjected to higher prices so the urban elite can virtue signal. Meanwhile: Fracking isn't contaminating groundwater, study finds:


A major anti-fracking argument by environmentalists may not have the facts to back it up, a new study conducted by Duke University found.

Fracking has not contaminated groundwater in northwestern West Virginia, according to the peer-reviewed study published this month in a European journal.

“Based on consistent evidence from comprehensive testing, we found no indication of groundwater contamination over the three-year course of our study,” explained Avner Vengosh, the professor of geochemistry and water quality at Duke’s Nicholas School of the Environment.

The growing industry could help create as many as 3.5 million jobs by 2035, according to the U.S. Chamber of Commerce.

Studies keep finding this, and anti-fracking activists keep ignoring them. What, do they hate science or something?

They don't love the environment. They hate people.
Posted by Fritz at 3:23 PM