It's Official! California All Wet! 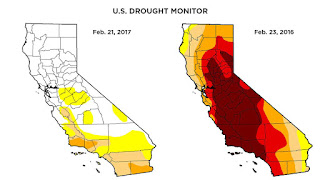 
Thirsty California lawns faded to brown from a lack of water in four extraordinarily dry years have revived to bright green in neighborhoods across the state.

Dry riverbeds of sand and tumbleweeds that snake their way through farmers’ fields now charge with water swelling up their banks.

Scenes like these and many others prompted California Gov. Jerry Brown on Friday to declare an end to the state’s drought emergency that had drained reservoirs and wells, devastated forests and farmland and forced millions of people to slash their water use. 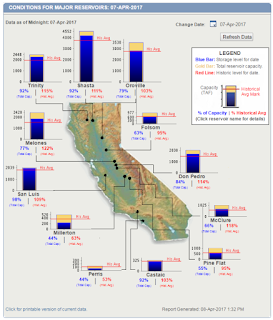 The turnaround has been stark. After years of brown fields and cracked earth, monster storms blanketed California’s Sierra Nevada Mountains this winter with deep snow that flows into the network of rivers and streams that supply much of the state’s water.

Still, lifting the emergency drought order is a largely symbolic measure that doesn’t remove most of the restrictions. Officials insisted they’re holding onto some conservation rules for the 40 million residents of the nation’s most populous state.
. . .
At the drought’s peak, citizens were urged to cut shower times and outdoor watering. Homeowners let lawns turn brown or ripped them out altogether and replaced them with desert-like landscaping.

For a starter, all government and non-profits should be forced to give up any watering on their landscapes. Of course, sensible water use is a must in California, where drought is more the rule than the exception, on a long term scale:

Now, if I were an asshole, I might credit global warming with the end of the drought. It's just weather, of course,
Posted by Fritz at 10:25 PM