Shuffling Off to Obamacare Schadenfreude

Lest we forget that despite the Republicans current problems with the issue, the current law, Obamacare (ACA) is still spiraling down. Wellmark to halt sales of individual health insurance policies. Newly popular, Obamacare is still losing insurers. From the New York Times: Obamacare Choices Could Go From One to Zero in Some Areas. 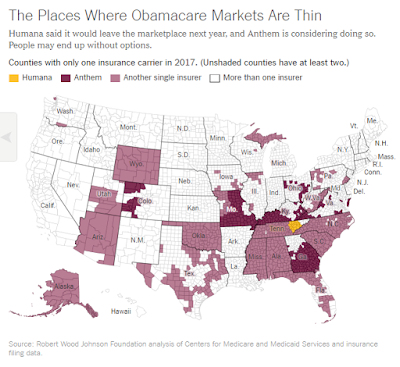 Which is not to say that Republicans aren't stuck on the horns of a dilemma. As Latest Health Plan Dies, Republicans Can’t Agree on a Culprit. White House ponders reorganization after health care debacle. Trump: 'I don't lose'

How Conservatives Can Convert the Healthcare Failure into a Win for Trump and the American People. Will Pence, Paul deliver on ObamaCare repeal after a mulligan? Restarting Health Care Effort Is Key to GOP Agenda. Fractured House GOP still can’t agree on Obamacare replacement.
Ryan on AHCA: Don’t get your hopes up yet. They're not up. GOP’s attempt to resurrect health care bill gets tepid reception.
The Obamacare Solution Is Hiding in Plain Sight:


The solution is found in a big, but overlooked $110 billion pot of money, known as the “patient and state stability fund.” If that fund is spent entirely or mostly on funding state-level “invisible risk pools,” it will fully address the so-called “preexisting conditions” problem, which is ultimately the main reason the Ryan bill has stalled out.

Fix the “preex” problem, and replacing Obamacare becomes not only doable but relatively easy.

Meanwhile, what’s causing moderate Rs to resist repealing those regulations? A desire to retain Obamacare’s most popular promise: the one that says “No one shall be denied health insurance due to the existence of a preexisting medical condition.”

Obamacare’s way of keeping that “preex” promise is to remake one-sixth of the U.S. economy, by imposing a host of costly and destructive regulations — the ones that are (rightly) causing conservatives to choke on Ryancare.

But the stability fund obviates any need for those regulations. How? By providing states $110 billion over a decade ($11 billion a year, on average) to ensure that Americans cannot be denied insurance coverage due to a preexisting condition. That amount is enough to protect every person in America who cannot afford insurance because of a preexisting condition. And the fund would be operational in every state, administered either by the state government or by the feds at the state’s option. Thus, the fund, being universal in extent, and sufficient in amount, fully obviates the need for the Obamacare regulations. You don’t need both. Heck, it is incoherent to have both.

I'm suspicious of any plan with "magic" money that already exists. Somebody else wants it really badly. But maybe.

No hurry, though: Egg on their faces: ObamaCare repeal will take a back seat to … Easter recess. Trump Spurs GOP to Tweak Health Bill Before Leaving Town. No Deal on Health Care as Congress Goes into Recess. The picture alone is priceless. White House divided on Obamacare payments. The Freedom Caucus Could Support the AHCA If It Included the Provisions Proposed by Pence: Deal in the making? Measure twice, cut once.

Endgame: Plurality of Republicans now favor single-payer health care. I suspect it depends a lot on how you ask the question.

And last, via Wombat-socho's "In The Mailbox: 0404.17", DeSantis Asks Trump To Revoke Congressional Obamacare Subsidies


Members of Congress receive unauthorized subsidies in order to offset the financial burden of purchasing health insurance; these subsidies are not available to the public at-large. By blowing the whistle on this special deal concocted by OPM, President Trump will make members of Congress better understand the burdens of ObamaCare, thereby incentivizing members to get to work on a good repeal and replace plan.

Yep; Congress should be forced to smelt what it dealt.
Posted by Fritz at 7:33 PM