Back on the Bay Again 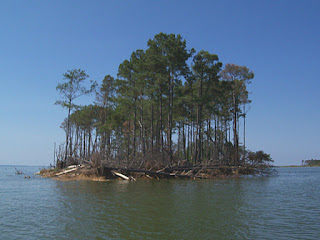 Georgia and I took off this afternoon around 3 PM for sightseeing/fishing trip. We headed off across the bay, with our first stop at what is left of James Island, just off the eastern shore at the south end of the Little Choptank River. It has eroded considerably since the last time we visited together about 10 years ago. 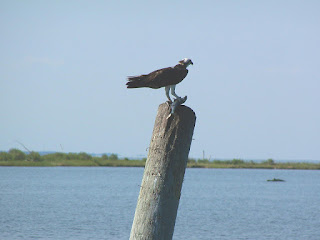 I tried fishing on a couple of points, but there wasn't much water moving, and I didn't get a hit. This Osprey standing on a piling was obviously doing a little better. He/she is welcome to the Menhaden. 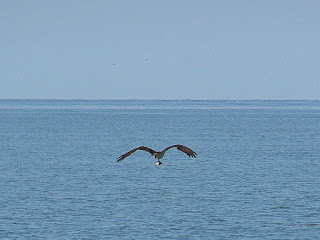 He/she resented our efforts at photography, and left. 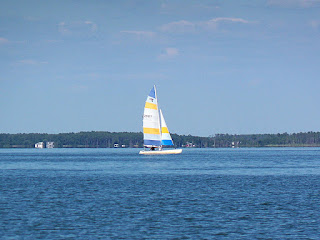 Needless to say, it was such a nice day, there were a few other boaters out taking advantage of it. 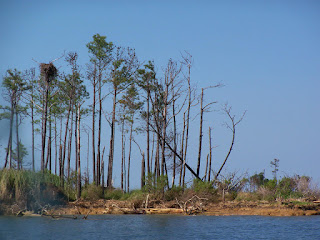 A big Bald Eagle nest up on a dead pine on James Island. We saw the eagles but didn't get a good shot. 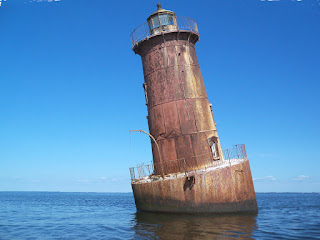 Our next stop was up the bay aways at Sharp's Island Light:


The current light, a sparkplug lighthouse, was constructed in 1882 with a concrete caisson foundation and a 35-foot (11 m) cast iron tower. . . .The tower includes an integral dwelling and was manned until 1938 when the United States Coast Guard automated the light. Leaning by about 15° since it was ice-damaged in 1977, the structure is picturesque, but in poor condition. 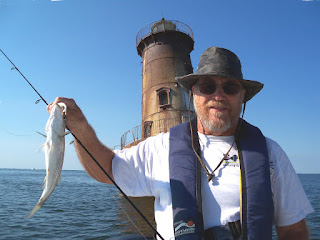 What a great vacation place!

Anyway, as I drifted around it, I noticed some suspicious marks on the depth finder as I drifted under its shadow. A few casts proved that a school of small Striped Bass was hanging around in the shade of the light. 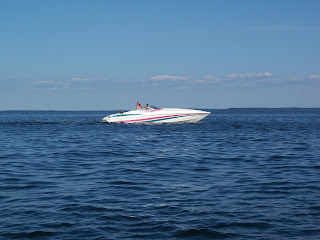 As we did this, we were circled by this go fast. I think they were taking pictures of the lighthouse too. 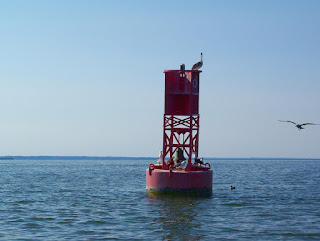 From Sharp's Island Light (there is no Sharp's Island anymore) we headed across the back. A quick stop to throw a lure or two at the Gooses bell buoy (red #80) was fruitless. From there, we crossed to the western side at Kenwood Beach (a long walk from our beach on a good low tide), and headed down the shore back to Flag Harbor.