Scientists attribute this boost in bay grasses to the rapid expansion of widgeongrass in moderately salty waters, even in areas where vegetation has not been observed before. Scientists have also observed a modest recovery of eelgrass in very salty waters, where the hot summers of 2005 and 2010 led to dramatic diebacks.

“This data offer hope to those of us who have watched these grasses decline in our lifetime,” said Virginia Institute of Marine Science Professor Robert J. Orth in a media release. “As efforts to clean up the Chesapeake Bay continue, these plant populations can rapidly recover. We cannot give up on our efforts to improve water quality, because there are plants and animals that depend on us to make this happen.”

However, before we join the chorus of praise for the progress, let's take a look at the data they've helpfully provided: 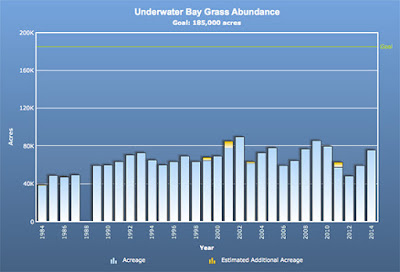 Note that 2014 is not the best year since the Bay restoration era began, in fact, it's arguably the 6th best since 2000, making it a good, but not particularly fantastic, result. There have been at least two multi-year periods of better grass cover, and the current 27% increase comes on the heel of a sharp downturn in 2011-2013. If one looks at only the period from 2000 forward, it would be tempting to conclude that the long term trend is downward, with multi-annual fluctuations on top of the downward trend. (I'm too lazy and unskilled to actually test this statistically).

As with many things in the Bay, sea grass is highly variable from year to year, depending largely on the timing of major weather events.

It would be nice if something has changed to ensure a continued upward trend, but I've heard of no such improvement. At best, we're treading water, as it were, or maybe even slowly sinking again.
Posted by Fritz at 4:43 PM