While Hillary Clinton's email scandal is more fun, life continues underneath the fun and frolic. Obamacare is the gift that keeps on giving, even if it's just giving little turds. 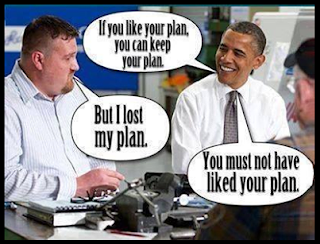 Last winter, CoOpportunity Health, one of the 23 health care co-ops created by the ACA, went under after it could no longer afford to pay for the care of its customers, who turned out to be sicker than the co-op expected them to be. The co-op was one of the only insurers offering ACA plans in Iowa, and its collapse was a victory for big insurers. In the wake of its demise, it remains uncertain whether the company will be able to pay back federal loans of $147 million.

It now appears that CoOpportunity Health is not alone in the predicament it found itself. In case you missed it, the New York Times recently picked up on an audit released last month of the 23 co-ops created under the law. The story does not paint a pretty picture: 22 out of 23 co-ops lost money last year, and many could find it hard to repay the 2.4 billion that the federal government spent overall on the co-ops.

The story notes that not all the news is bad: Some of the co-ops are doing better than others, and some quoted by the Times predict that the co-ops’ financial situations will improve over time. Even there, however, the news is mixed, for one way some of these co-ops may become solvent, and thus able to pay back their federal loans, is by raising premiums . . . 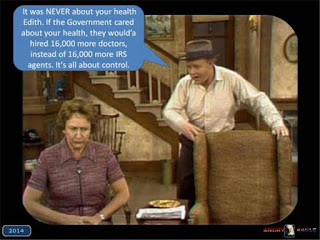 So much for bending down the cost curve. But somebody figured out a way to benefit. Obamacare Gives Big Windfall To Insurance Companies As Quality of Healthcare Declines


Most still remember the president’s famous words, “if you like your doctor, you will be able to keep your doctor.” But for many, that’s turned out to be another unfulfilled Obamacare promise. Now, insurance companies are preparing to gouge consumers with massive premium increases. Estimates for 2016 show that insurance companies around the country are seeking premium rate increases of 20 percent to 40 percent or more, saying their new customers under Obamacare turned out to be sicker than expected.

Not only are insurance companies shifting more costs onto patients, but across the country, insurers are restricting access to care and choice by limiting the number of doctors and hospitals they provide in a coverage network. Insurance plans on government-run Obamacare exchanges on average have 34 percent fewer hospitals and doctors — including specialists — in their provider networks than health policies sold outside those exchanges or offered by employers. . .

Meanwhile, as Americans are suffering from rising costs and less access to quality health care, the biggest winners from the passage of Obamacare are the insurance giants. In the aftermath of the government health care takeover, there has been an explosion of health insurance company profits, windfalls and megamergers. As “stock market darlings,” health insurance company profits have skyrocketed to all-time highs and stocks have split even thanks to the health care law.

Reports show the so-called “Big Five” health insurers – UnitedHealth, Aetna, Cigna, Humana, and Anthem – have all outperformed the broader stock market by a wide margin since Obamacare was signed into law in March 2010. That’s why America’s Health Insurance Plans, the industry’s main trade group, filed an amicus brief to defend the Obama administration in the recent Supreme Court case, King v. Burwell. And when the law was upheld, it was no surprise that there was a boost in health insurance company stocks. 
OK, strictly speaking it also could be fairly called a ‘husband tax’ or a ‘spouse tax.’ You may also quibble on the ‘tax’ bit, largely because this is being done to avoid a tax.  But, hey: no Republican voted for this monstrosity, remember? So I’m admittedly a little indifferent to any Democratic pain over the nomenclature.


To avoid the Affordable Care Act’s so-called “Cadillac tax” on rich benefit plans, companies are adding surcharges of $100 a month or more to wives and husbands of workers, hoping spouses will seek coverage elsewhere, new employer data shows.
[snip]
The idea behind the so-called “spousal surcharge” employers are implementing is to reduce the number of people an employer covers so the company can save money and avoid triggering the special excise tax for plans with high cost benefits.

Basically, if you have a high-end plan – and thanks to inflation, the definition of ‘high-end’ will get broader and broader every single year – then the company that you work for will want to get your spouse off of your insurance plan whenever possible. If making you pay a hundred bucks a month will do so, then that’s what an increasing number of them will do. To be fair, many companies don’t really want to, because people get cranky on the subject, but again: no Republican voted for this monstrosity.  “Tell your troubles to Jesus: the chaplain’s gone over the hill.” 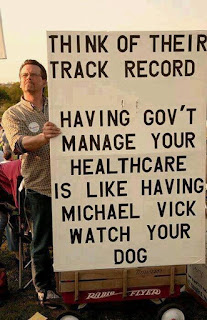 And speaking of the "wife tax":  26% of employers could face the ‘Cadillac tax’ on health insurance


The next fight over the Affordable Care Act may center on one of its most powerful provisions to contain health care costs — the "Cadillac tax" on the most generous health insurance plans.

A new analysis released this week by the Kaiser Family Foundation estimated that just over a quarter of employers that offer health plans would pay the 40 percent tax in 2018 on at least one plan if they don't make changes. The National Business Group on Health, a nonprofit association of large employers, found that half of its members reported that at least one of their health plans would trigger the tax in 2018. Both groups predicted that the proportion of employers affected would go up significantly over time.

That means many employers are scrambling to find ways to avoid the tax. Ultimately, that will probably mean a combination of paring benefits and shifting cost to employees through high deductible plans, capping or eliminating flexible savings accounts, and offering less generous plans that, for example, limit access to a narrower networks of doctors and hospitals.

This, of course as noted by Moe Lane above, was long foreseen by conservatives, who observed that the terms of the "Cadillac wife tax" were not indexed to inflation, and were thus designed to bite more people every year. But it least affect straight and gay marriages equally.
Posted by Fritz at 10:36 AM