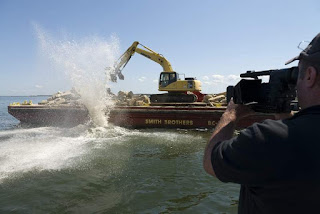 Friday afternoon, a bulldozer plopped broken pieces of concrete off a barge into the Chesapeake Bay to serve a dual purpose: to contribute to an existing artificial reef and the implementation of a plan for Dominion Cove Point to use materials resulting from demolition.

On Friday, 100 tons of concrete were unloaded into the bay in the third of a total of six or seven loads. The existing reef near Taylors Island serves as a fish habitat and has been in progress since 1986, said Erik Zlokovitz, artificial reef coordinator for the Maryland Department of Natural Resources Fisheries Service.

All of the material donated by Dominion Cove Point was tested for cleanliness before being deposited into the bay. The concrete was from the foundations of buildings that were demolished to make room for the construction of the $3.8 billion liquefied natural gas export facility at the existing plant in Lusby, said Dominion Cove Point spokesman Karl Neddenien.

The requirement for Dominion to prepare and implement a plan to use concrete is from the Maryland Public Service Commission’s Certificate of Public Convenience and Necessity, which was approved in June 2014, according to information provided by Dominion Cove Point.

In the years prior to the reopening of the gas docks, and prior to all the security concerns after 9/11, the Dominion Gas Docks were an important destination for recreational, charter and commercial fisherman. Fish were attracted by all the structure (the pilings and the tunnel that connects to shore), and the strong currents that whip around Cove Point. So I suppose it is fitting that the company is building some alternative structure since its activities have closed off that fishing ground.


The entire reef sits where the water’s depth is about 35 to 40 feet, and the reef is 200 to 300 feet long, 10 to 20 feet wide and 3 to 4 feet high. Included in the reef is more concrete and an old sunken barge. The “beneficial re-use” of such material is sometimes cheaper than disposing of it in landfills, Zlokovitz said.

Without the artificial reef, the bottom of the bay in this area is featureless, with flat sand and silt with some muddy patches. There is not much habitat, so the artificial reef provides a place to settle. It attracts small fish, which attract larger fish that feed on them. In other words, the reef material creates “fish condos,” Zlokovitz said.

If the reef gains enough elevation, it changes the bay currents, which are beneficial for remixing the water and help with oxygen levels.

“Any change in current is attractive to fish,” Zlokovitz said.

However, I'm not so sure about the utility of a 4 ft high reef in 40 ft of water over off Taylor's Island. In summer, 40 ft of water around here is often in the anoxic zone, and colonization by benthos and utilization by fish will be substantially inhibited. I'd rather see it in 20 ft of water, where it would likely be almost continuously alive and well. But I'll be sure to check it out.
Posted by Fritz at 10:04 AM