“He was innocent, so he never thought ISIS would hurt him.”

Shielding Syrian Antiquities, to a Grisly Death at ISIS’ Hands 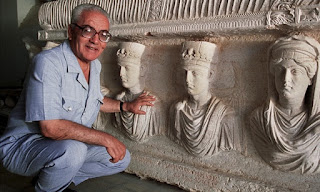 Now, months after his home fell to the jihadists of the Islamic State, Khalid al-Asaad, the retired chief of antiquities for Palmyra, has fallen, too.

After detaining him for weeks, the jihadists dragged him on Tuesday to a public square where a masked swordsman cut off his head in front of a crowd, Mr. Asaad’s relatives said.

His blood-soaked body was then suspended with red twine by its wrists from a traffic light, his head resting on the ground between his feet, his glasses still on, according to a photo distributed on social media by Islamic State supporters. 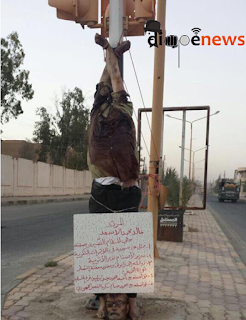 Before his death, the jihadists had interrogated him in vain about where to find the city’s hidden treasures, Syrian state news media reported, suggesting that the elderly caretaker may have died protecting the same history he had dedicated his life to exploring
. . .
Reached by phone on Wednesday in the Syrian city of Homs, Mr. Asaad’s son, Mohammed, said his father had refused to leave the city, thinking the jihadist group, also known as ISIS, would not bother with someone his age.

“He was a retired government employee and an old man,” the younger Mr. Asaad said. “He was innocent, so he never thought ISIS would hurt him.”

I would like to thank President Obama, former Secretary of State Hillary Clinton, and current Secretary of State John Kerry for their policies of rapid withdrawal from Iraq, and ignoring the ISIS insurgency until it reached this point.

ISIS needs to be destroyed, root and branch.
Posted by Fritz at 9:13 AM