Don't Spend It All In One Place 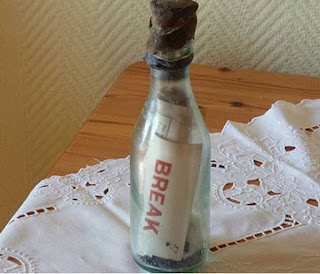 
The world’s oldest message in a bottle to ever be found is believed to have been recovered - after 108 years at sea.

Marianne Winkler, a retired postal worker, was on holiday when she spotted the unusual bottle floating by the German island of Amrum.

She told local paper the Amrum News the clear glass bottle had a note inside bearing only the words: “Break the bottle.”

“My husband, Horst, carefully tried to get the message out of the bottle, but there was no chance, so we had to do as it said," she said.

When the couple unfurled the note inside, they found a message in English, German and Dutch. It asked the finder to fill in some information on where and when they had found the bottle, before returning it to the Marine Biological Association in Plymouth. It said whoever did so would be rewarded with one shilling.

I'm going to throw the bullshit flag on this one. No bottle would survive 108 years in the ocean and look that pristine. It would be covered with barnacles and scum. In fact, I suspect the accumulation of such garbage would sink a bottle that floated for even a few years. Most likely it came from a shelf somewhere; either stolen from MBA or just a collector. If it did actually get tossed into the ocean,it was probably quickly cast ashore and buried in sediments that protected it until recently.
Posted by Fritz at 10:18 AM