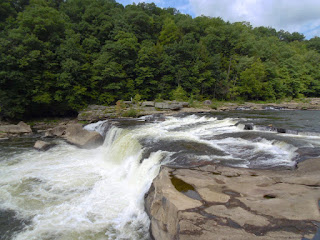 Our way home from Canonsburg today took us back down The National Pike (Rt. 40). 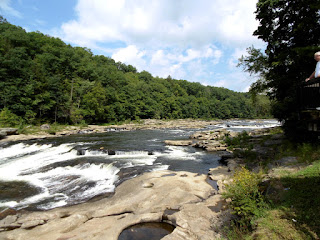 Hoping to miss the rush hour in the DC area, we dawdled by visiting first Ohiopyle State Park. . . 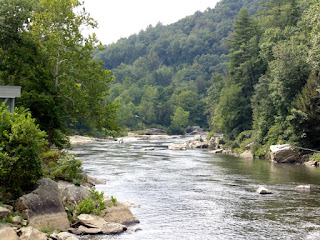 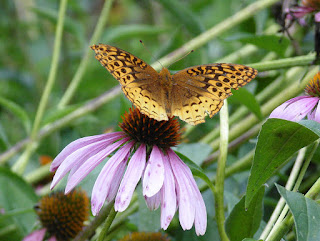 At Ohiopyle, I found this fritillary on some cone flowers near the visitors center. Great Spangled or Aphrodite? 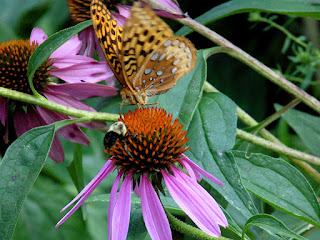 I'm trying to talk myself into Aphrodite, but I'm afraid it's probably just another GSF. . . I'll have to send it to BOMA for a sure identification.

UPDATE: Alas, BOMA identified it as just another GSF. 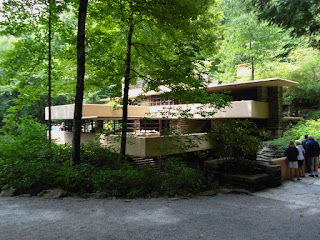 Our next stop was a little farther out was Fallingwater, the house built by famous architect Frank Lloyd Wright for Edgar Kaufmann Sr.


Time cited it after its completion as Wright's "most beautiful job"; it is listed among Smithsonian's Life List of 28 places "to visit before you die." It was designated a National Historic Landmark in 1966. 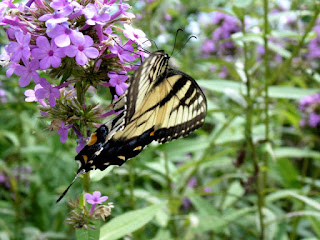 In the parking lot I found a few of these Swallowtails. I'm hoping they are Appalachian Swallowtails, a separate near relative of our Eastern Tiger Swallowtails. 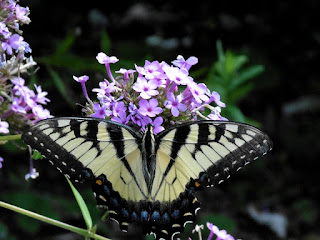 Similar to Eastern Tiger Swallowtail, but larger. Wings slightly angular and vertical black stripes narrower. Hindwings of males triangular. Underside of forewings with nearly continuous yellow submarginal band. Undersides of hindwings with rectangular submarginal lunules. Female has both yellow and black forms. Both forms with markedly reduced iridescent blue wash on topside of hindwings. The upperside hindwing has a prominent orange marginal spot that is generally smaller than the row of pale marginal spots. 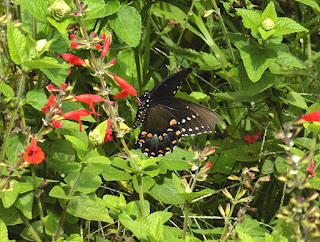 We found this familiar Spicebush Swallowtail in a flower bed. . . Along with this Silvery Checkerspot; the second I've seen for sure. 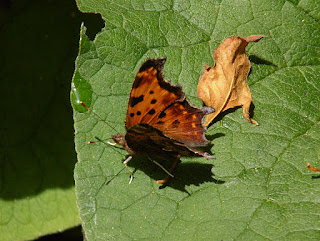 Hanging around the house itself I found this Eastern Comma. . . 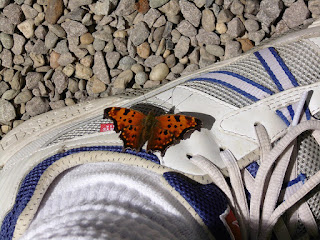 Which attached itself to my foot for a ride as we walked around the house. 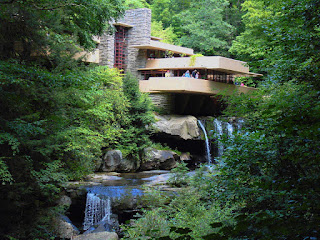 We only paid $8 each for the "grounds pass", which allowed us to go all around the ground and into unheated spaces (like those terraces). $27 each would have bought a guided tour including the inside. But we would have needed an hour to start, and we weren't willing to hang around that long.

The classic Fallingwater picture.
Posted by Fritz at 9:39 PM