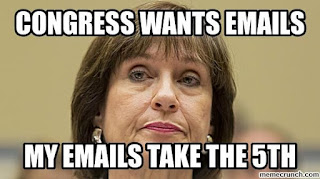 
Lois Lerner had yet another personal email account used to conduct some IRS business, the tax agency confirmed in a new court filing late Monday that further complicates the administration’s efforts to be transparent about Ms. Lerner’s actions during the tea party targeting scandal.

The admission came in an open-records lawsuit filed by Judicial Watch, a conservative public interest law firm that has sued to get a look at emails Ms. Lerner sent during the targeting.

IRS lawyer Geoffrey J. Klimas told the court that as the agency was putting together a set of documents to turn over to Judicial Watch, it realized Ms. Lerner had used yet another email account, in addition to her official one and another personal one already known to the agency.

This rather reminds me of the EPA email scandal, when Lisa Jackson was caught using an EPA email account under the name "Richard Windsor", which she alleged was the name of her old dog, but which in reality was the name of a famed environmental terroractivist. The account was used to shield certain email from the prying eyes of FOIA and Congress, such as her backroom connivance with environmental groups that was too suspicious for her official email.

It will be interesting to see what kind of material is in Toby Miles' in and out boxes.
Posted by Fritz at 11:50 AM