Humor is Truly Dead and Buried

And the SJWs did it. A couple of things. First, this kerfuffle a about a bad joke that Amy Poehler deliberately wrote into a comedy show. Take it away, Ace: 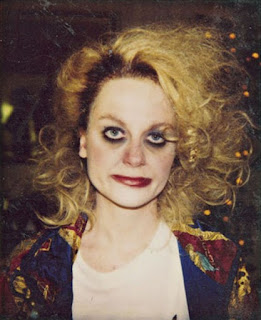 
. . . via Mary Katharine Ham, rounding up the new outrages of the day (Oh no -- someone's going to play dress-up as Caitlyn Jenner, who isn't actually Caitlyn Jenner), she drops this amazing story of how loathsomely stupid our society is: 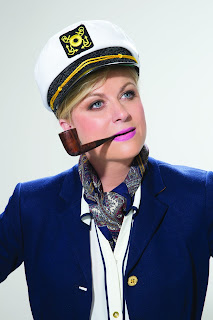 It turns out that dressing as Bruce Caitlyn Jenner for Halloween is a violation of his her civil rights. Who knew?


A tasteless joke by an inept comic in Amy Poehler's Hulu series -- a joke designed to demonstrate the character's incompetence -- instead has redounded against Poehler, and brought out the Twitter tomato-tossers.
This is complicated, so pay attention: Poehler has a new series on Hulu called Difficult People, which has gotten some good reviews... 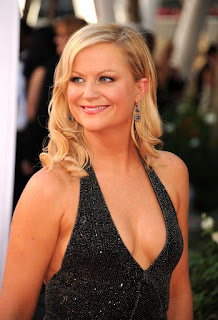 I might have to check that out, but it sounds like the humor may be above my pay grade. Too much knowledge of current celebs, and not enough slapstick:


The main character, played by a Julie Klausner (Poehler produces but does not appear in the show), writes a twitter joke about how she can't wait until "Blue Ivy" (Beyonce's kid) grows up to be old enough to be peed on by R. Kelly (a rapper who got arrested due to his enjoyment of urinating on underage girls).

See, I wouldn't have gotten the joke because I not only don't know who Blue Ivy is, I have never heard of  R. Kelly and his unusual predilection for water sports.


The joke is not presented as funny in the show -- no one but the Klausner character thinks it's funny -- and she catches grief for it on Twitter. Her boyfriend or husband (not clear) gives her only an awkward silence as she tells the joke.

But, America now having a lower rationality level than primitive people who are still burning "witches" at the stake, of course morons have to attack the show and Poehler for the joke.

I'm of two minds on this. I hate the ever increasing attempts to control the conversation and force SJW conventions on the world, but at the same time, Poehler (NSFW link) is certainly one of the liberal elite whose media dominance have made this possible, and I do love a little blue on blue action.

And from the campus, where PC is an official policy being mandated by the Federal Government: ‘No More Fun of Any Kind!’


“Thou shalt not joke about sex,” would seem to be the politically correct commandment on campus this fall:


The Ivory Tower Outrage Brigades are once again picking up the cudgel of political correctness and are salivating at the thought of beating some poor miscreant over the head with it.
In this case at Old Dominion College, the party started even before classes began. The Eta Chi chapter of the Sigma Nu fraternity decided to live up to the reputation of frat boys everywhere and hung some banners welcoming freshmen girls to the school: 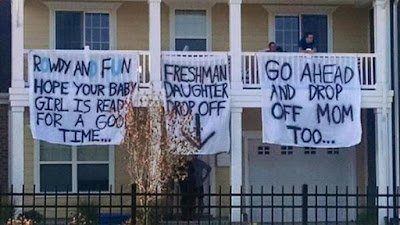 Meanwhile, at Old Dominion University, the Sigma Nu chapter’s expression of phallocentric humor was not appreciated:
ODU officials . . . say they are investigating. . . .


“Messages like the ones displayed yesterday by a few students on the balcony of their private residence are not and will not be tolerated. The moment University staff became aware of these banners, they worked to have them removed. At ODU, we foster a community of respect and dignity and these messages sickened us. They are not representative of our 3,000 faculty and staff, 25,000 students and our 130,000 alumni. . . .Any student found to have violated the code of conduct will be subject to disciplinary action.”

College boys want to have sex with college girls? And actually make jokes about their heterosexual intentions? Outrage! 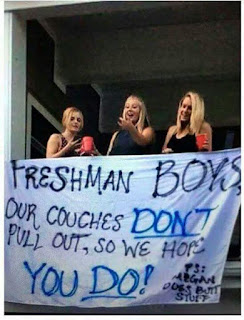 As pointed out by Ace, the girls actually know how to deal with this, using their own sense of humor:

However the fraternity was suspended, but the sorority? That might hurt the delicate flower's feelings.

Wombat-socho enters the fray with "Rule 5 Sunday: Hot Babes In Space."
Posted by Fritz at 6:00 AM