A Clot Busting Drug for Alzheimers, Prions and Heart Disease?


A virus found in sewage has spawned a unique drug that targets plaques implicated in a host of brain-crippling diseases, including Alzheimer’s disease, Parkinson’s disease and Creutzfeldt-Jakob disease (CJD).

Results from tests of the drug, announced this week, show that it breaks up plaques in mice affected with Alzheimer’s disease or Parkinson’s disease, and improves the memories and cognitive abilities of the animals.

Other promising results in rats and monkeys mean that the drug developers, NeuroPhage Pharmaceuticals, are poised to apply for permission to start testing it in people, with trials starting perhaps as early as next year.

The drug is the first that seems to target and destroy the multiple types of plaque implicated in human brain disease. Plaques are clumps of misfolded proteins that gradually accumulate into sticky, brain-clogging gunk that kills neurons and robs people of their memories and other mental faculties. Different kinds of misfolded proteins are implicated in different brain diseases, and some can be seen within the same condition. 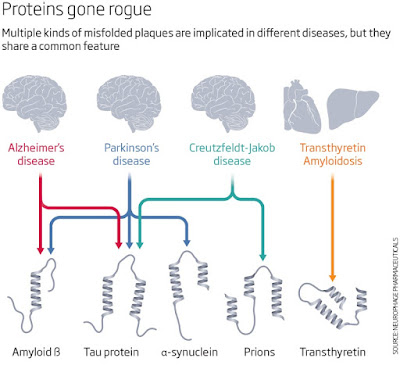 Animal tests show that the drug reduces levels of amyloid beta plaques and tau protein deposits implicated in Alzheimer’s disease, and the alpha-synuclein protein deposits thought to play a role in Parkinson’s disease.

Tests on lab-made samples show that the drug also targets misfolded transthyretin, clumps of which can clog up the heart and kidney, and prion aggregates, the cause of CJD, another neurodegenerative condition.

I see a couple of issue, but none which are necessarily fatal. First, the brain is protected by the blood brain barrier, which substantially limits the compounds that can move from the bloodstream to the brain. Second, the very nature of the clumps of proteins makes it difficult for drugs to attack the plaques, since they are only likely to have access to their surface.

Nonetheless, this is a really promising step forward, one I look forward to before I forget everything else. . .
Posted by Fritz at 5:00 AM