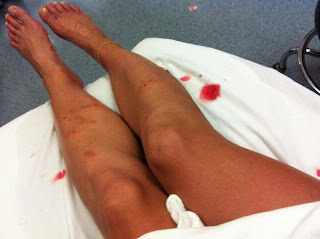 The squirrels gained powerful new allies in their war against human civilization, when a Duluth otter decided to wage war on a triathlete swimming in Island Lake.

Fangs pierced Leah Prudhomme's legs as she swam across the deep, dark rum-colored northern Minnesota lake. It could be anything, she thought -- muskrats, beavers, maybe a muskie. But it didn't let up.

In the middle of Island Lake near Duluth, the triathlete struggled as the animal sunk its needle-sharp teeth into her legs, feet and back, leaving 25 bite marks, some 2 inches deep.  "It just kept coming after me," said Prudhomme, 33, of Anoka. "You never knew where it was going to bite next."

In between peppering her with puncture marks, the animal's head popped up a few feet away. That's when Prudhomme noticed its distinctive long tapered tail, small beady eyes and gray head. An otter. 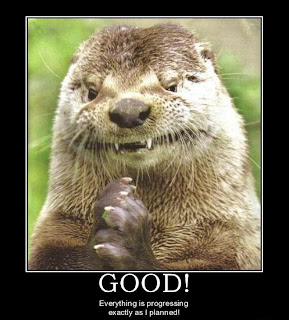 No chance of out swimming an otter, you pretty much have to hope it gets bored with biting you and gives up.  Or maybe while swimming you should carry a fish to give to the otter to distract it.


"I couldn't believe Duluth had an otter," she said Saturday before getting more rabies shots, her swollen ankles and bite marks still healing three days after the incident.

The rare lake attack baffled conservation experts and doctors, who could only surmise that the atypically aggressive otter had rabies or was a mother protecting young pups.

"I've never seen or heard of it before," said Mike Scott, a conservation officer with the Minnesota Department of Natural Resources in Duluth. "We've got otters everywhere ... lakes, streams. Most times, [swimmers] wouldn't even know it. Otters usually stay away."

Between the squirrels in the forests, and the otters in water, only the plains and deserts will be safe for humans. Heaven help us if the Prairie dogs and Black Footed Ferrets join the anti-human crusade too.
Posted by Fritz at 5:00 AM