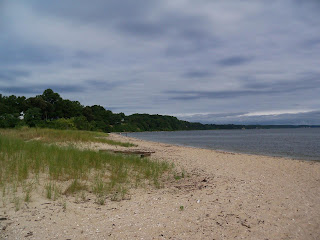 The first and only beach report for this weekend.  Yesterday was a full day.  Rainy and cool, we had to drive Alex and Kelly to the airport to catch a flight to LAX to represent the East Coast side of the family at the annual reunion in Pismo Beach, Calif.  They also dropped off their dog, Hendrix, for a stay with us. 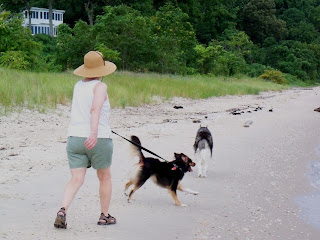 After dropping them off at BWI, we did some other errands, including taking my mid 70s J-45 Gibson guitar to a luthier (not a necessarily a Lutheran), to have it examined and possibly repaired.  Alex insists it needs to have it's neck reset.  By the time we got home in the afternoon, it was still raining, and a beach walk just didn't better than a nap. 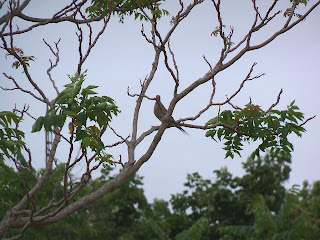 So this morning, we bundled the dogs into the SUV, and headed off.  It's still cloudy, and the weather is quite tolerable.  Above, Georgia tries to wrestle with Hendrix, who thinks it's completely unfair for Skye to be off leash while she's stuck.  But it's for the best; on her own Hendrix will swallow enough bay water to get a bad case of diarrhea. 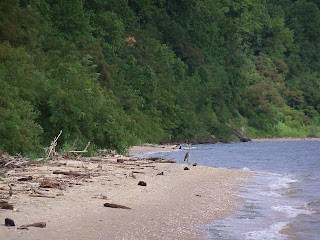 We saw the usual assortment of Ospreys and Eagles (I saw an Eagle being harassed by some small birds when it soared past "their" tree).  No photos though, but I did get the Mourning Dove above, sitting in a tree hanging over the beach, and the Great Blue Heron fishing along the shore. 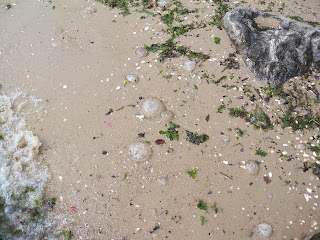 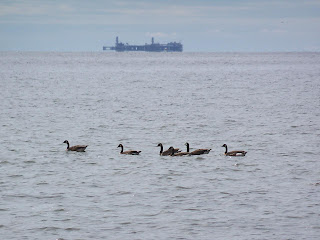 Something a little odd, at least here.  A group of Canada Geese, probably expatriates, since any sensible goose has gone back to Canada by July.  Of course, in Maryland we have lots of geese that stay, so called resident or "golf course" geese who decline the annual trip to the Motherland.  I've never seen them around here, though. 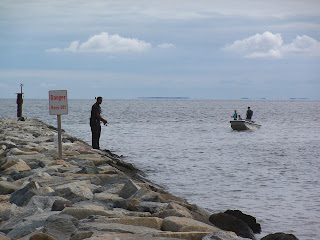 Some fishing going on around the mouth of the harbor.  I didn't see any fish coming up, though.
Posted by Fritz at 1:40 PM